In light of the Spruce Mountain  "expansion creep" possibly being discussed at the Bethel Inn tomorrow, I'm re-posting the following expansiion creep post having to do with Record Hill. I'm not sure of the status but am throwing it out there.

Apparently there was just some sort of vote on this the other night by Roxbury selectmen. There may also be talk of Power Purchase Agreements, possibly sanctioned by the Maine PUC. This project may be an extension of Angus King's Record Hill project.

Apologies for any inaccuracies.

John Richardson was a gubernatorial candidate in 2010, commissioner of the Maine Department of Economic and Community Development between 2007-2009, and served as a Maine legislator for Brunswick between 1998 through 2006.....Patton is Native Power's lead technical adviser and a former Northeast development manager for Boston -based wind developer First Wind.......

Richardson described the wind turbine proposal as a low-impact project proposed by Horseshoe Valley LLC, a newly-forming group which has four principals, whom he didn't identify.
When asked, Richardson said Bob Linkletter, a Roxbury landowner and logger, owns the land on which the wind power project would be operating. He said they are trying to create a 3-acre wind project with turbines that would produce between 7.5 to 15 megawatts of energy. 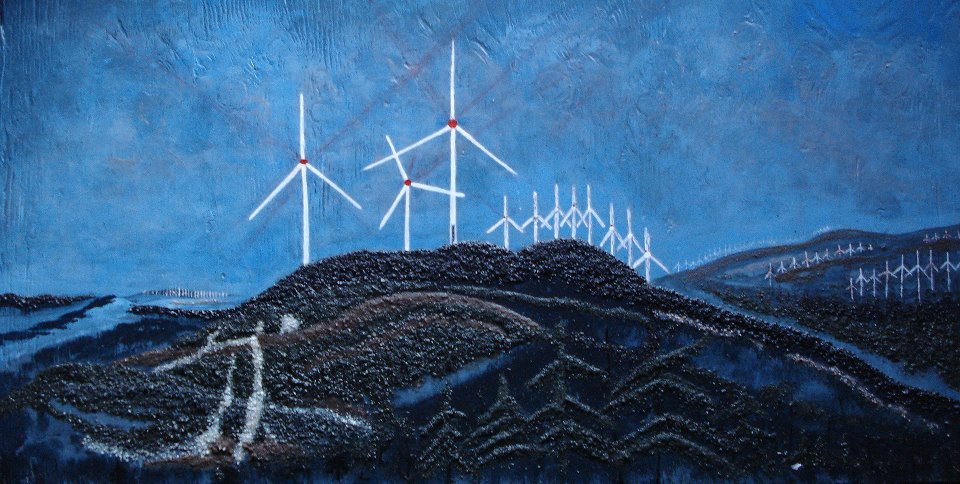 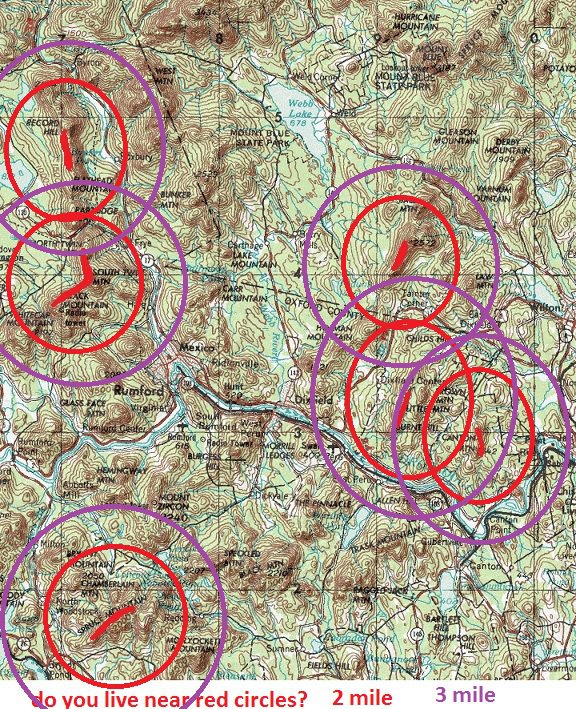 Under the wind siting law, this would be a "Community" wind project if it is as small as is implied. The state law favors it still, but locals have a say in it. One would hope that the Roxbury Town fathers have learned and heeded some hard lessons from Record Hill.  Also, this site is just over the town line from Rumford, a town that endured a lengthy and brutal civil war over wind power, and that ultimately passed an ordinance protective of Rumford.  But just over the town line?  Sorry.

"Conclusion: Richardson is either understating the number or turbines OR he's overstating the expected amount of electricity the project will produce. "

I would guess he is understating. During the permitting stage of Stetson I , First Wind reps. and LURC held several meetings for the locals. It was stated before Stetson I was built at one of these meetings that there would be 55 turbines. ..at the time they were trying to permit ,  I think, 38 , for Stetson I. I did not hear this statement but two of my neighbors did. The First Wind rep. quickly walked back his inadvertent truthfulness.

Another neighbor said that a friend of his who works for J Haynes said that they knew when Stetson I was approved that Stetson II would be too.

And I think from past experience with flyers and printing out facts that flyers with pictures would not only be quicker but more effective. Like your idea of depicting the size of the proposed turbines.

May I suggest a flyer that shows how large a 604' turbine would look on North Twin Mtn? According to the Maine Gazettteer North Twin Mountain is 2150' tall. According to Wikipedia Roxbury is at 725' above sea level. That means the topographic prominence of the mountain is 1425 feet. That's the apparent/visible height of the mountain. If they use a 5MW turbine that's 604' tall, the turbine would represent an additional 42% on top of the mountain. And yet the article says "Richardson described the wind turbine proposal as a low-impact project".

When I read this article my lie detector (aka BS meter) went off the scale. Consider the following two quotes:

"He (Richardson) said the three turbines would be built..."

"He (Richardson) said they are trying to create a 3-acre wind project with turbines that would produce between 7.5 to 15 megawatts of energy.

Suppose Richardson is quoting the project's nameplate capacity. That would translate into three turbines each of which would be nameplated between 2.5MW and 5MW. Gamesa's model G128 5.0MW onshore turbine is past prototype stage and is now being installed commercially in Europe. That turbine is 604 feet tall (see http://www.compositesworld.com/news/gamesa-installs-5-gw-onshore-wi...).

Conclusion: Richardson is either understating the number or turbines OR he's overstating the expected amount of electricity the project will produce. Either way he's lying.

Let's hope someone on the Roxbury Board of Selectmen or the Planning Board know their basic arithmetic!

Roxbury knows industrial wind power. They've been through the process, and for three years now they've lived with the 22 turbines on Record Hill and Partridge Peak. This proposed site on North Twin is just two miles down the line from the existing turbines on Partridge Peak.  So essentially it would look like an extension of the Record Hill project. Like Record Hill, this site is just over eight miles east of the Appalachian Trail, so its visual impact is discarded. It would be 15 miles west of the turbines on Saddleback in Carthage and 12 miles west of Col. Holman Mountain in Dixfield.  About 20 miles in the other direction, to the southwest, is the Spruce Mountain wind project. See the picture?  They're connecting the dots, so to speak.  Keep giving them subsidies, keep building transmission, keep mandating their product, keep loose laws in place, keep accepting the money….Maine is being nibbled away by these vultures.