By John Peterson on Seeking Altha

Last Wednesday I stirred up a hornets nest with an article titled "A Reality Check for Wind Power Investors" that included two graphs from the Bonneville Power Administration, or BPA, which manages a four state, 300,000 square mile service region that's home to over 40% of the installed hydro capacity and roughly 12% of the installed wind capacity in the US.

The first graph tracks the BPA's regional load and power production from hydro, thermal and wind facilities over the last seven days and shows why the region is one of the largest power exporters in the country. 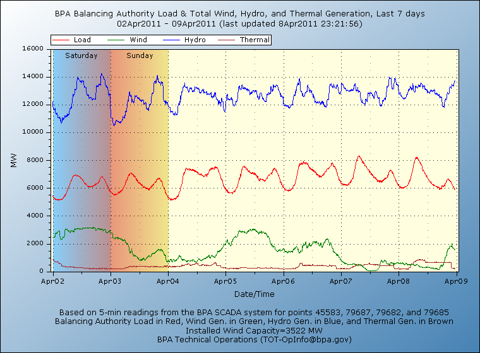 The second graph provides stand-alone tracking data for wind power in the BPA region over the last seven days. 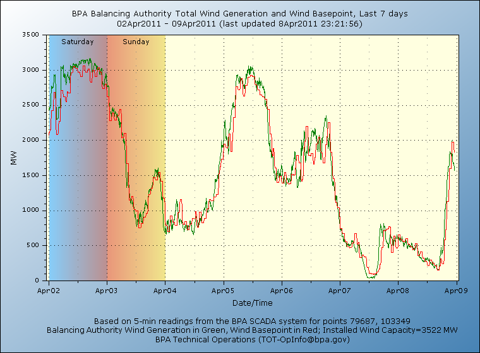 My concern was that the BPA graphs clearly contradict widely accepted notions that:

Until I saw the BPA graphs I assumed that wide geographic dispersion of facilities would ameliorate the erratic nature of wind power. The graphs proved my assumption wrong. Once it became clear that broad regional dispersal wasn't enough, I began looking for comparable data on a nationwide basis and couldn't find it – ANYWHERE.

Friday, Jack Lifton pointed me in the direction of a March 2011 "Analysis of UK Wind Power Generation" (.pdf) that was commissioned by the John Muir Trust, Britain's premier wildlands conservation charity, and found that:

The study's most startling conclusions were that:

While the complete set of 28 monthly tracking graphs that accompany the UK Analysis are less colorful than the BPA's, the erratic and wholly unreliable character of the UK's wind resource is remarkably similar to the BPA's resource. 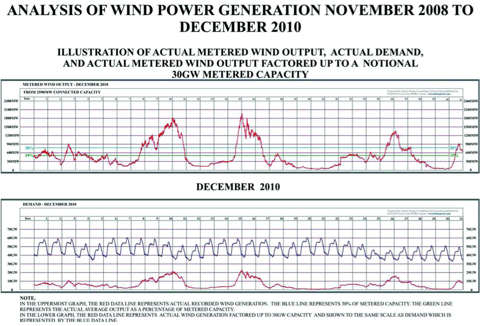 My undergraduate degree was in accounting and I understand statistics well enough to know that data from a single region does not disprove the theory that geographic dispersion of wind facilities will solve the intermittency problem. However, my accounting professors taught me that when two substantial samples from regions as diverse as the UK and the Pacific Northwest leave room for reasonable doubt, prudence requires a larger sample and a more granular analysis.

The idea of geographic dispersion is so inherently plausible that it's accepted without question. What if it's a lie? We know it doesn't hold water in the BPA region and we know it doesn't hold water in the UK. The raw data almost certainly exists. Compiling the hard data into a national landscape would require little more than an Excel spreadsheet, particularly if we assume away the need for a robust and flexible interstate transportation grid. The only reason I can imagine why nobody has published results from such a study is that the results are dreadful and they disprove the theory.

I would love to be proven wrong on this point because my preliminary conclusions are damned inconvenient. The time for platitudes and calm assurances from advocates and promoters is past. We need detailed analysis of hard day to day data if we ever hope to have a sensible energy policy that works in the real world.

In light of the clear data from the BPA and confirmation from comparable analysis in the UK, I continue to believe that investments like the First Trust ISE Global Wind Energy Index ETF (FAN), the PowerShares Global Wind Energy Portfolio ETF (PWND) and a host of publicly traded wind power stocks should be avoided like the plague.

Link, with many comments:  http://seekingalpha.com/article/262713-wind-power-investors-get-ano...

Comment by Brad Blake on April 10, 2011 at 11:56pm
I find John's points to be spot on in my own experiences with analyzing wind. It is the biggest farce going. It is irresponsible for the governments to force mandates for a particular source of electricity, driving up costs. Wind is the least productive, most costly source of electricity. Wind development depends on taxpayers money and selling Enron-inspired RECs. Thank goodness smarter heads prevailed in Washington and we have thus far avoided nation PRS. But a regional RGGI in the northeast is fueling the blasting away and leveling of hundreds of miles of Maine's mountains for sprawling industrial wind complexes to meet arbitrarily set and ever increasing percentage mandates for renewables. Wind sites are being developed throughout areas on the NREL map of Maine that are totally white coded--poor wind potential--and Maine's profile with its bountiful hydro resources parallels the BPA cited by John. Get government out of being a mandating nanny state and stop interfering in free markets by giving preferential treatment to an industry that doesn't deserve it.