Will Occupy target green cronyism, too?

Here is a pop quiz for people who support the Occupy Wall Street movement: Which U.S. senator wrote the following statement in 2009, in the midst of the current financial mess? 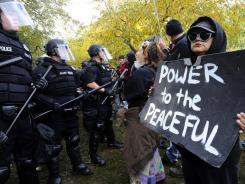 "… customized contracts are essential for firms to adapt to the new regulations, hedge risk, and raise capital.New York's financial industry is already the global leader for existing customized commodity products and would be exceptionally well positioned to provide the legal and financial expertise necessary for these new products."

The author is left-leaning Sen. Kirsten Gillibrand, D-N.Y. Her piece two years ago advocated the proposed cap-and-trade system to cut carbon emissions, noting that the complex "new products" required as part of the system, would create new jobs on Wall Street and put money into the hands of struggling financial firms.

Writing in TheWall Street Journal, Gillibrand's piece was titled "Cap and Trade Could Be a Boon to New York." It described the inherent complexity of cap-and-trade not as a drawback, but as an opportunity from which Wall Street brokers could profit. At a time when securitized assets and creative derivatives were being indicted for their part in creating a nationwide housing bubble, she saw an opportunity to use those same instruments in a government-created energy market.

Why was she so tone-deaf to the risks of her proposal? With the rise of trendy environmentalism, politicians and businesses eagerly try to cash in with the public — politically and financially — by appearing green. As the social value of appearing green has increased, politicians propose public policy ideas designed to take advantage of that appearance, selling policies that may do little for the environment, but rig the rules of the game to benefit both favored businesses and sponsoring politicians.

Sadly, many of the policies du jour that attempt to take advantage of the power of eco-fads do little or nothing to help the environment.

While the costs of cap-and-trade are paid, ultimately, by customers who use energy to heat their homes or to produce goods, the system has failed to achieve the promised environmental benefits. The proliferation of creative accounting undercuts the goal of emissions reduction itself. As we see with Europe's cap-and-trade system, when companies can violate emission targets by exploiting loopholes, that model is broken.

But the system has enjoyed relative popularity because of the potential financial windfall for some companies. For their part, politicians enjoy the support of Wall Street while boosting their public images as environmental crusaders.

The irony is that critics of cap-and-trade or similar regulatory systems are often accused of being bought off by "big oil" or "big coal." Such accusations are easily believed because industry groups have an obvious interest in protecting a system that puts profits in their pockets.

We rarely hear the opposite, though equally legitimate view, that companies like GE or bankers on Wall Street have an interest in working the government's regulatory system to their benefit.

These problems are a key reason to support individual environmental incentives and the power of personal responsibility for actions that actually enhance the environment. Simple and transparent solutions are harder to manipulate than complex systems rife with political deals.

Will Occupy Wall Street and its supporters highlight the ways trendy environmental activists and their allies in business are working to enrich themselves at the expense of the public and the environment? Or will they give activists a pass, by helping to protect the unearned environmental image of their ideological friends?

The answer will say much about the sincerity of Occupy Wall Street protesters' professed concern about reforming our financial system and protecting our environment.

Todd Myers is the environmental director at Washington Policy Center in Seattle. This is adapted from his new book Eco-Fads: How the Rise of Trendy Environmentalism is Harming the Environment.