According to ABC this is Bird-Smart Wind Energy.

We developed and support the concept of “Bird-Smart” wind energy development, which is designed to minimize bird fatalities. Bird-Smart wind energy adheres to the following principles:

We also recognize and promote the immediate need for innovative, scientifically valid research aimed at developing effective methods for pre-construction risk assessment and post-construction monitoring of bird (and bat) deaths. 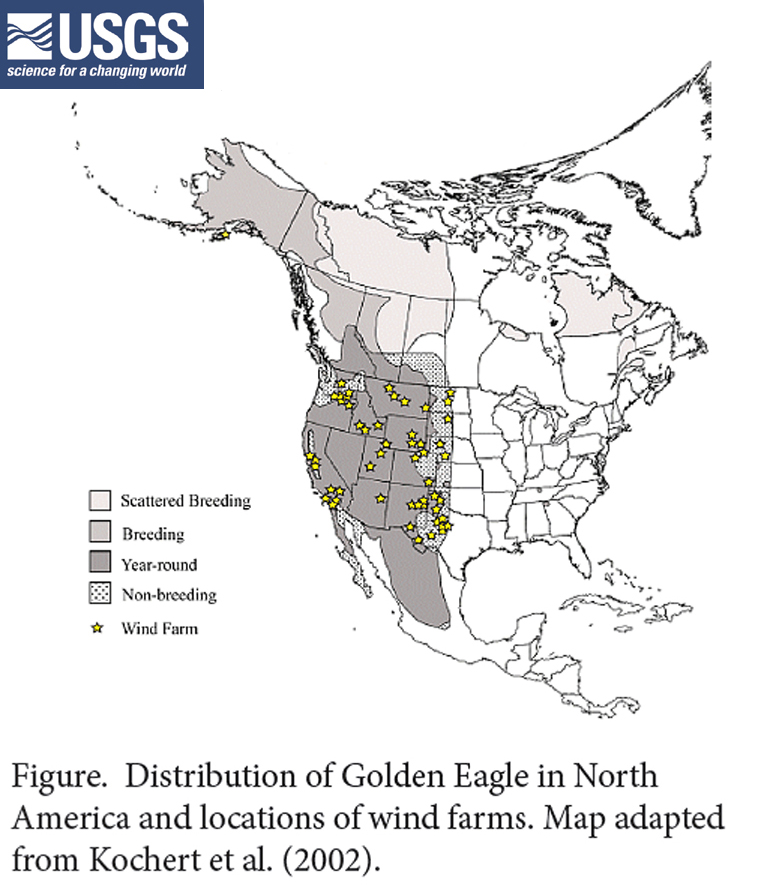 ABC also makes claims that they want to see "independent, scientific and transparent post-construction monitoring of bird and bat deaths conducted to help inform mitigation",  yet they do not state how this can ever be achieved. In order to do so they would have to admit that the industry research is fraudulent or being rigged.

This is what Bird-Smart wind energy really looks like

There is no one on earth that understands better than I do the corruption and hidden devastation that exists with wind industry developments. This language below was written was written by me as a guide for communities to help protect them from fraudulent wind energy developers and government collusion.

Post-construction studies will include scientific methodology such as daily searches and appropriate sized search areas that will eliminate the biased or fake wind industry research that has existed for decades. Post-construction field studies will include research into regional nesting failures of special status species like raptors and include documenting territory abandonment of species. When post-construction field studies are being conducted, only researchers involved with post-construction mortality studies will be legally allowed to touch carcasses. Wind personnel or for that matter anyone caught moving carcasses will be subject to a charge of felony interference of an investigation because wind turbines do kill endangered species and other highly protected species. During the life of the project every carcass, crippled bird or bat found anywhere inside and within in one mile of the boundaries of the wind project site must be reported with this information made available to the public.

Information pertaining to all wind turbine impacts will be made public with no exceptions. (This will eliminate the need for all wind personnel, lease holders, government wildlife agencies and researchers to be silenced with nondisclosure agreements.)

Only with these regulations or laws can honest mitigation ever can take place. The public will only then know the true numbers of eagles being slaughtered and the net losses of all highly protected species taking place from wind energy development.

As for the USGS  and their "science for a changing world", it should never include fraudulent research  and paying experts to rig studies. But sadly this is the way it is. Read about the "Science" below. It is all  fake science. Also note that "incomplete data" really means rigging and this incomplete data will always exist without the guidelines I have presented. 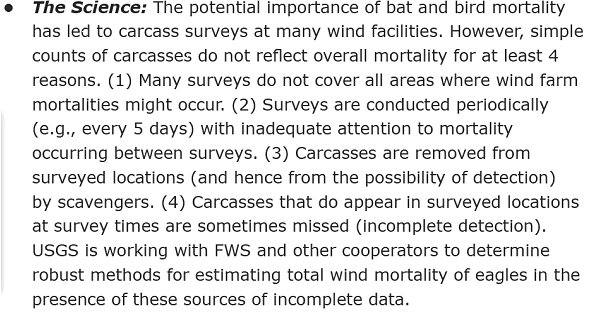 My point exactly Penny. To mitigate, make 'em shut down.  To compensate, how much money and from whom and to whom? If both mitigation and compensation were done rigorously, it would be pretty clear that wind energy is contrary to everything the 'environmentalists' preach.

Was thinking too. We kept being told, and it's in Pisgah's propaganda, that "house cats kill more birds than wind turbines do". But do house cats kill eagles? Do song birds get killed by turbines like eagles do? Besides, when was the last time you saw a 'house' cat leave a bird half dead and mangled? Doesn't it finish the job? Don't you think birds recognize cats as predators and have a fighting chance? What the hell is that giant machine anyway screwing around with the air currents??

Since birds require air space as a critical component of their habitat, is any wind energy "bird smart"?

It is all about rigging the process. If this were a card game involving money (poker) people would be getting killed right and left. The rigging seen with the wind industry is actually part of a much bigger problem that involves both of our righteous political  parties.

Look at our fake electoral process and all the supporting propaganda the public is being bombarded with. As it is with our elections, the best liar wins.

It is very clear who these scumbags want to place in office, one of their own. With the Democrats it is Hillary and with the Republicans it is Cruz or some other last minute replacement.

Simply put, it comes down to these Crooked Bastr**s having to take their greedy unearned cut out of everything and this is what the federal deficit actually represents.

If people do not wake up and get a handle on this escalating in your face corruption, there will be no saving this country or solving a single environmental problem facing this world.

According to the Oxford Dictionary:

Mitigation: The action of reducing the severity, seriousness, or painfulness of something: the identification and mitigation of pollution

Compensation: Something, typically money, awarded to someone in recognition of loss, suffering, or injury: he is seeking compensation for injuries suffered at work

There are ways for mitigation of the kills, but how can there be compensation? Who gets the money? As, with every thing, wind industry, it's all about the money. When you see a dead golden or bald eagle under a turbines blades, does it run through your mind, how much money is that bird worth?

Who do they pay for that bird? I guess in Maine anyway, its the Audobon Society.

I have asked ABC to help several times, and nothing. We are in the process of expanding the turbine blades 76% in Altamont Pass CA. I have 1/2 of the project in appeals, or stalled. I have no bird groups accept Save The Eagle & Jim Wiegand that support stopping the slaughter. The USFWS is selling Eagle Kill license, Watch this live Power Point https://onedrive.live.com/redir?resid=933E3388ADF55EFD!117&auth...

I have a May 10 appeal hearing please send a the board of supervisors a request to stop the killing!