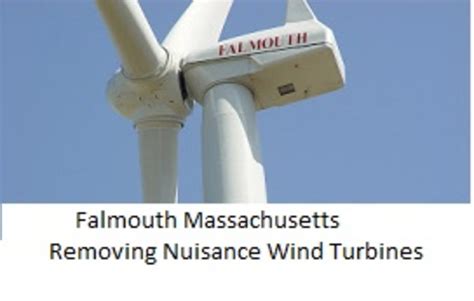 Who Said Wind Turbines Aren't An Expensive Nuisance
The Town of Falmouth, Massachusetts installed two industrial 1.65-megawatt wind turbines in 2010 and 2012 both without permits and lacked abutter notifications according to local zoning regulations. The town had been warned prior to installations by the manufacturer that each turbine generates a chest-pounding 110 decibels of noise. The warning letter was more than likely why the town went forward without permitting.
In a NASA research supported by the US Department of Energy, Dr. Neil Kelly and his colleagues 1987 identified impulsive low-frequency noise. The wind turbine infrasound and vibration produced " Human Annoyance " within neighbors' homes. Falmouth neighbors complained of the same headaches, fatigue, temporary feelings of dizziness, nausea, etc. as over 40 years ago.
The Town of Falmouth taxpayers financed over 11 nuisance lawsuit complaints and appeals with residents regarding the two wind turbines located at the wastewater treatment facility on Blacksmith Shop Road.
Massachusetts  Superior Court in 2017 declared the turbines a nuisance and ordered the town of Falmouth to shut down two town-owned wind turbines allocating 2.5 million to remove the turbines.
The original $5 million loan on Falmouth Wind II the second town-owned turbine was actually funded by ARRA [America Recovery and Reinvestment Act]. The Massachusetts Department of Environmental Protection through a Project Regulatory Agreement used ARRA funds to finance the town-owned turbine.
# ARRA fund repayment 2022
The Massachusetts Clean Water Trust, May 4, 2022, authorized the acceptance of a lump-sum payment of not less than $975,000 from the Town of Falmouth in exchange for the cancellation of the debt of the town to the Trust under Loan Agreement No. CWSG-09-36 dated January 22, 2010, as amended.
The Mass Clean Water Trust board also responded that the cash  $975,000.00 loan payment from Falmouth according to a letter from the Town of Falmouth to Mass Clean Water Trust is funded from the November 12, 2019, Falmouth Town Meeting vote to appropriate 2.5 million to remove both town-owned wind turbines.
The demolition bid ending on April 14, 2022, to remove the two nuisance turbines is due in a few days.