The battle over a power line in Maine features a television advertisement depicting felled pine trees in the wooded US state paired with noir images of a corporate tower in modern Bilbao, near the Guggenheim art museum. A voiceover declares: “A good deal for Spain, and a bad deal for Maine.”

President Joe Biden has called for accelerating transmission projects in his executive order on climate in the first week of his administration. Since then, a coalition of 45 energy and environmental groups has pressed the need for a federal tax credit for high-voltage transmission. New power lines would send green energy to distant markets, greatest wind resource area, greatest solar resource area, existing electric transmission lines (345 kV or more) 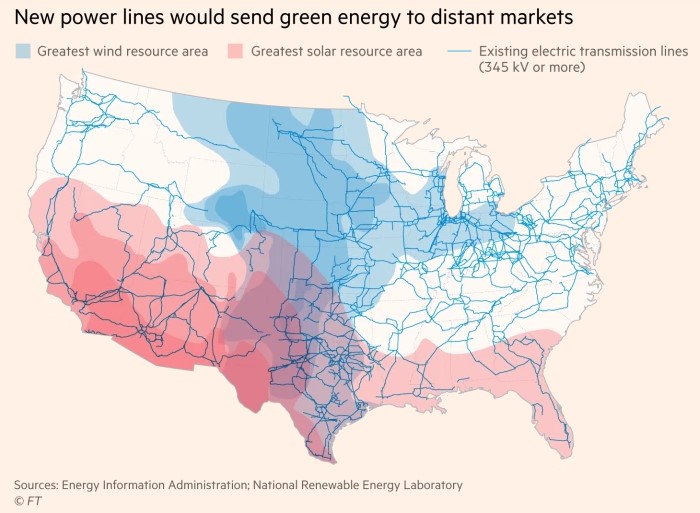 Rich Glick, the new chairman of the Federal Energy Regulatory Commission, wants his agency to reassess policy to trigger more transmission investment. “We have to substantially build out the grid more than we’ve been doing,” he said. A bigger grid would allow wider deployment of solar and wind power, filling gaps when the sun shines or wind blows in one place but not another. It would also support rising demand from electric vehicles and building heaters.

Picking the average American's pockets a utility bill at a time, Biden's "Green New Scam " has it all planned to have payola to the party, generated FROM YOU!

“A good deal for Spain, and a bad deal for Maine.”

A GOOD DEAL FOR SPAIN AND WALL STREET, A BAD DEAL FOR MAINE

Wind and Solar Subsidies Provide a Bonanza for Wall Street

This URL shows wind and solar prices per kWh would be at least 50% higher without direct and indirect subsidies. They would be even higher, if the costs of other items were properly allocated to the owners of wind and solar projects, instead of shifted elsewhere. See below section High Levels of Wind and Solar Require Energy Storage.

Any owner, foreign or domestic, of a wind and/or solar project, looking to shelter taxable income from their other US businesses, is allowed to depreciate in 6 years almost the entire cost of a wind and solar project under the IRS scheme called Modified Accelerated Cost Recovery System, MARCS. The normal period for other forms of utility depreciation is about 20 years.

Then, with help of Wall Street financial wizardry from financial tax shelter advisers, such as BNEF*, JPMorgan, Lazard, etc., the owner sells the project to a new owner who is allowed to depreciate, according to MARCS, almost his entire cost all over again. Over the past 20 years, there now are many thousands of owners of RE projects who are cashing in on that bonanza.

The IRS is required to annually provide a 5y-running estimate to Congress, by law.

The indirect largesse of about $53.2 billion/y, mostly for wind and solar plants^ that produce expensive, variable/intermittent electricity, does not show up in electric rates. It likely is added to federal and state debts.

Most of the direct federal subsidies to all energy projects of about $25 billion/y also do not show up in electric rates. They likely were also added to the federal debt.

Most of the direct state subsidies to RE projects likely were added to state debts.

The additional costs of state-mandated RPS requirements likely were added to the utility rate base for electric rates.

Warren Buffett Quote: "I will do anything that is basically covered by the law to reduce Berkshire's tax rate," Buffet told an audience in Omaha, Nebraska recently. "For example, on wind energy, we get a tax credit if we build a lot of wind farms. That's the only reason to build them. They don't make sense without the tax credit."