Prices are going up at the pump...err, we mean the Tesla Superchargers.

According to a new report from electrek, Tesla is increasing prices at its Supercharger stations "significantly" across Europe as the continent continues to deal with a sprawling energy crisis that shows no signs of slowing.

The additional price hikes come after Tesla has already increased prices throughout 2022.

"Due to an increase in energy prices, we are adjusting Supercharging pricing across Europe," Tesla wrote in a letter to its owners in Europe this week.

The rising prices not only are a burden for EV owners, but they are starting to challenge the narrative that EVs are cheaper to own and operate on a day to day basis. 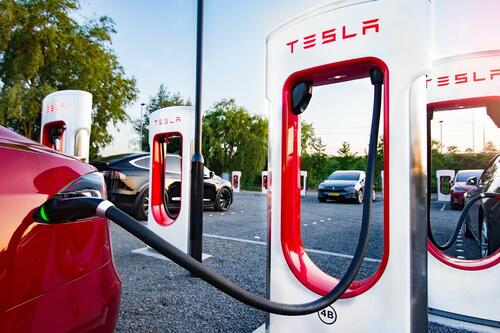 "One of the biggest advantages of electric vehicles remains that their cost of operations is much lower than vehicles with internal combustion engines," electrek wrote.

But with rising prices at Supercharging stations, who knows how much longer that perceived "benefit" will continue to help buoy demand for electric vehicles.

As we noted earlier this month, energy bills in Europe are expected to rise by €2 Trillion. The trigger for this exponential surge in costs: since January 2020, 1-year forward gas and power prices – usually the reference when signing new energy supply contracts for families or industrial customers – have each increased by more than 13x.

The following exhibit shows this evolution, rebased to 100. 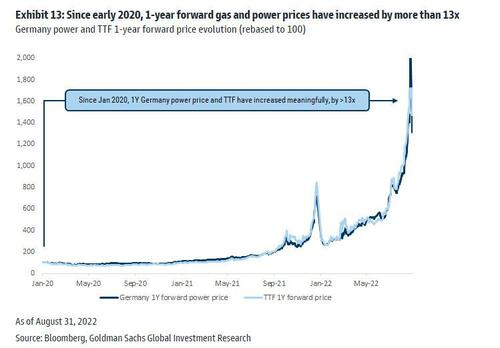 The blog lamented that it used to cost no more than $5 or $10 for a full charge at a Supercharger. Now, prices are approaching $30

One Zero Hedge contributor in Europe experienced the rise in prices firsthand this week when an Uber driver, sporting an EV other than a Tesla, remarked that electricity prices had soared over the past week, and that it now costs about $30 to charge fully at a Supercharging station.

A couple dollars more and it'll almost cost the same as filling up with a tank of gas. Oh, the irony...

If you haven't been looking at what is going on in some schools between teachers and young children:

- Kids are being used as props in sexual fantasies

- Keep children away from your sex life sicko.

- Tucker: "In a healthy country with intact social fabric, neighborhood dads would mete out instant justice to anyone who even thought about sexualizing their kids"