The ill-considered sanctions against Russia have exposed the most acute problems of Europe which is rapidly losing its economic power.

A tremendous amount of businesses are on the verge of bankruptcy.

A flood of migrants from Africa, the Middle East and Ukraine requires more and more budget spending.

Funds are also being used to support the Kiev regime.

As a result, Europe’s economies are deteriorating and living standards are plummeting

Enterprises are on the verge of closing

In Britain 60% of enterprises are on the verge of closing due to higher electricity prices. This is reported by the analytical group Make UK, representing the interests of British industry. 13% of British factories have reduced working hours and 7% are temporarily closing down. Electricity bills have risen by more than 100% compared to last year.

In Germany, according to the Leibniz Institute for Economic Research, the number of firms and individuals went bankrupt in August alone rose 26% compared to the same period last year. The figure was significantly higher than German analysts had forecast.

According to experts, during the autumn the number of bankruptcies will only increase. This is connected with the increase of the cost of production processes, in particular with the rise in prices for energy.

German Chancellor Olaf Scholz acknowledged that many Germans have faced with rising prices for fuel and food. Most countries in Europe were in a similar situation. But the authorities are sacrificing the quality of people’s lives in order to continue to exert pressure on Russia.

The crisis is just ahead

At the same time, many experts believe the stopping of Nord Stream 1 and 2, total capacity 110 BILLION CUBIC METER OF NATURAL GAS PER YEAR, will cause Europe’s worst energy crisis in decades. 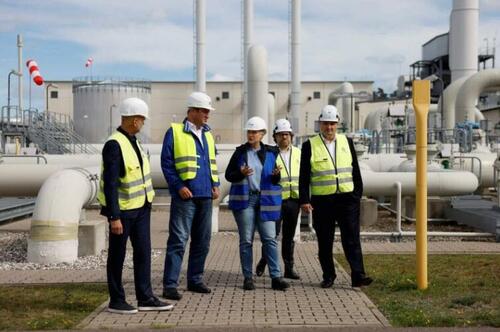 Manuela Schwesig, state premier of Mecklenburg-Vorpommern, and Markus Söder, state premier of Bavaria, visit a site that will feed an existing pipeline network with liquefied natural gas in Lubmin, Germany, on August 30, 2022

This circumstance has already caused a sharp rise of prices of energy resources on the European market. As a result, energy bills of European households have increased.

According to Goldman Sachs’ analysts, its cumulative cost will peak in early 2023, increasing by 2 trillion euros. It has also led to a record depreciation of the European currency over the past 20 years.

The increased cost of gas, heat and electricity has an adverse effect on the living standard of the people. But an even more dangerous problem is the falling liquidity of European products produced at the new cost of energy. European products are becoming uncompetitive on the world market: their price is much higher because of the cost of electricity and gas.

Attempts by EU leaders to introduce a price cap on energy from Russia have completely failed.

“Europe reaps what it sows”

European countries are themselves to blame for the problems they face this coming winter, because of reduced gas supplies from Russia, Turkish President Recep Tayyip Erdogan said. According to him, “Europe reaps what it sows”, while Turkey “has no problems with gas supplies at low costs”.

The crisis in Europe is a result of political mistake. On one hand, sanctions against Russia, are favorable only to the U.S. And on the other, the imposition of the post-hydrocarbon economy on Europeans has shown its insolvency.

As a result, energy prices in Asia and Latin America today are much lower. And so are the wages of production workers. In other words, European products are totally uncompetitive. And we see a decrease in the liquidity of those products on the market. As a consequence, the European economy begins to plunge into recession.

In particular, Christian Sewing, Director General of Deutsche Bank, said on Septem... that Germany is no longer able to avoid recession. Already at the moment it is buying significantly less raw materials from major suppliers such as Brazil, Argentina and the U.S.

The next logical consequence will be mass production closures and rising unemployment. European technology companies are already reducing the number of high-paying engineering positions.

In September, German wind turbine manufacturer Siemens Gamesa announced its intention to reduce the number of employees to 1,500 people. 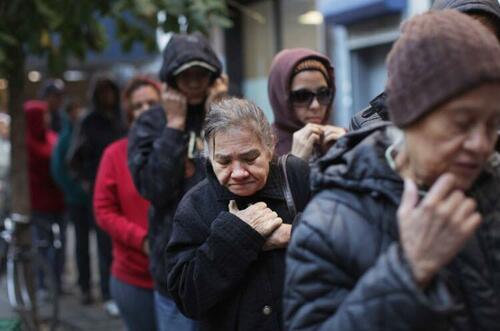 In turn, rising unemployment will cause a drop in living standards and an additional burden on government budgets, as the fight against poverty requires additional social spending.

European economies survive through stimulus. But this exacerbates inflation. Dutch Prime Minister Mark Rutte said, “You can’t help everyone, so we in the West will be a bit poorer, because of the high inflation, the high energy costs, the high food costs".

ILLEGAL Migrants are ruinous to budgets

Meanwhile, the energy crisis and production problems have been exacerbated by migration policies that require additional budgetary injections into the social sphere.

We must take into account the fact that some immigrants enter Europe illegally and are not registered. They are primarily residents of Somalia, Nigeria, Gambia, Iran, Pakistan, Mali, Afghanistan, Eritrea and Syria.

Moreover, more than 10 million people left Ukraine since the end of February. Of these, at least 6 million people remain in European countries, while 3.7 million have already received refugee status.

The average cost per such migrant is 7,000 euros per year. Even without Ukrainians, Germany alone spends 25 to 55 billion euros annually on refugee aid.

The European economy could afford these enormous expenditures before the energy crisis. But now the situation is such that expenditures are only increasing while revenues are falling.

Following the catastrophic electricity and heating bills, Europe’s population is facing mass unemployment, followed by a decline in social support from the state. These processes inevitably lead to an overall decline in living standards.

Germany: Greens Plan to Ban Native Germans From a Third of Jobs to Promote ‘Diversity’

Forced migration is often done to destabilize, tilling the soil for bigger and badder things. The CIA moved 1 million North Vietnamese into culturally different South Vietnam in the years leading up to the war which had been on the CIA predecessor's drawing boards since 1945.

Most of the damage of WW2 had been repaired.

The Autobahn roads were wonderful, no speed limit.

I had a BMW, frequently went 110 mph, and had cars passing me, such as Porche and Mercedes.

Guest workers from Turkey were brought in by the millions over the years.

They did not want to many German girls

They insisted on bringing girls from Turkey, and with them came extended families and Muslim places of worship, with calls to prayer.

Merkel and her ENERGIEWENDE were disasters for Germany.

Comment by Dan McKay on September 22, 2022 at 5:27am
Michael Yon
@MichaelYon1776
·
5h
Germany obviously preparing for Martial Law
I’ve been back in Europe for almost three months. Netherlands, Germany, Czech, Austria, Hungary, Belgium, and Luxembourg on this trip.
Luxembourg already gone. About 50% of Luxembourg is now ‘migrants.’ The once incredible Luxembourg City now feels dangerous. Literally shit on the streets, drug deals, fights — saw about ten fights in just a few days.
Yesterday I drove from Budapest back through Austria and now am in Frankfurt am Main. Through corridors of endless windmills that many Europeans have come to despise.
The German/Austria border was thick with German Border Polizei with military rifles. Maybe 50 Polizei but was difficult to count due to geometry.
Germany is openly preparing for martial law: