Setback leaves Savoy wind project up in the air

"Setback leaves Savoy wind project up in the air"

SAVOY — Proponents of the Minuteman Wind project hoped to be ordering turbines right about now.

Instead, they are recovering from a setback.

On Sept. 27, Savoy voters rejected a request to adjust the wind-power bylaw residents passed nearly a decade ago. The change would have allowed Palmer Capital Corp., the firm managing the project, to increase the height of five turbines it seeks to install on West Hill near the Hawley line.

By upping the height 30 feet, the company calculated, it could increase electrical output by 15 to 20 percent, enabling it to pay $40,000 more a year to the town.

The measure needed a two-thirds majority at the special Town Meeting session, but it failed to reach even a simple majority, with 126 against and 53 for the change. To pass based on that turnout, the bylaw change fell short by 67 votes.

Lindsay Deane-Mayer, Palmer Capital's project manager, said a decision on how to proceed may not come until 2018.

"It's a big puzzle and all the pieces have to come together," Deane-Mayer said. "Everything was coming together. Now it's spreading apart."

"We're a little bit behind," she said.

She planned to update a timeline on minutemanwind.com, which as of Wednesday still said the company expected to complete its financing and place an order for the turbines in the fourth quarter of 2017, which started Oct. 1. That is no longer likely.

The Clipper turbines the roughly $31 million project hoped to use are no longer available.

Deane-Mayer has said the project can move forward with or without the extended height. But the loss of the option of increasing the size to just under 455 feet is forcing the company to review all aspects of the deal.

The wind farm was conceived as a 12.5-megawatt installation. Without the bylaw change, that could drop to 11 megawatts, Deane-Mayer said in September.

"It limits our options," she said this week of the vote, and "makes all of the economics a lot tighter."

Meantime, the developer and the town continue to discuss the size of a payment in lieu of taxes deal. The project has made a dollar offer to the town, which Deane-Mayer declined to specify.

John Tynan, chairman of Savoy's Select Board, said that as Minuteman Wind regroups, the town must also wait.

"The height was a big thing for them," Tynan said of the failed bylaw change.

He said that after an initial round of discussions about how the project will compensate the town, the sides remain apart.

Last spring, Palmer offered a "base figure" of $73,000 in an annual payment in lieu of taxes agreement, known as a PILOT.

"That was ridiculously low," Tynan said.

In later talks, the figure $130,000 was proposed, though Tynan also terms that low.

"They really should be back in the range that they promised the town to begin with," he said. "We didn't come close to an agreement."

But that initial promise, upwards of $220,000 a year, was made nearly a decade ago and may be difficult to achieve due to changes in energy markets, both sides say.

While the project is encouraging the town to accept a PILOT that adjusts for changes in energy output, Tynan said the town prefers a set amount.

"We wanted a figure that would be steady whether the turbines were turning or not," he said.

The added $40,000-a-year payment, based on taller turbines, is now off the table.

The town hired a New Hampshire consultant to advise it on the PILOT. That cost was picked up by the project, as the bylaw requires.

Deane-Mayer said that in advance of the Sept. 27 vote, the company encountered what she termed "well-organized opposition" to wind energy in the Berkshires.

"That explains a little bit about what we saw," she said, referring to the outcome. Asked whether it was a mistake to bring the issue to voters again, Deane-Mayer said no. Palmer Capital and Minuteman Wind, she said, needed to try to secure the additional generating capacity. And she notes that the town stood to gain financially as well.

The project team took away a new appreciation for community concerns, Deane-Mayer said.

"People should reach out if they have questions." she said.

In Memory of Jack Alexander

Jack Alexander was unable to leave the property he loved. Wind development destroyed his peace and tranquility.

His suicide should have been prevented if the DEP, BOH AG, governor, ... intervened to protect public health.

Jack was tormented by the wind turbine demons: audible and inaudible (infra-sound).

His last words to friends; "I can't take it any more, I don't know what to do, ... something must change". Jack died alone on a cold winter night at one of his favorite places beneath those damn wind turbines.

Florida, Massachusetts wind turbines are next door to Savoy 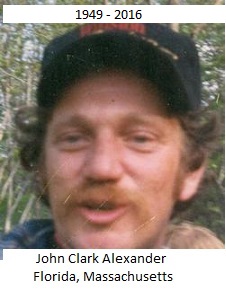