Save the Parks and Public Reserved Lands from Turbines

The Bangor Daily News recently ran an editorial where out-going Dept of Conservation Commissioner was expressing concern about the incoming Governor cutting parks budget.  This is my response:

Save the Parks and Public Reserved Lands from Turbines

When did Eliza Townsend ever speak up to Baldacci about the greatest single threat to Maine's state parks and Public Reserved Lands (PRL)?  Baldacci embarked the state on destruction of many of these areas in inland Maine by pushing the proliferation of industrial wind sites.  Her predecessor, Pat McGowan actively pushed wind as well, particularly when he was running for Governor.  What kind of hiking, boating, fishing, camping experience can people have when the view is 400 foot tall turbines, the star-filled night sky is sullied by blinking aviation lights, and the gentle swish of breeze through pines and the calls of the loons are drowned out by the roar of wind turbines?

The list is way too long to cite all the impact, but a few key ones come to mind:  This coming week, LURC will vote to extend the Kibby wind project to Sisk Mt. which overlooks the remote and gorgeous Chain of Ponds PRL.  Kibby is already in the viewshed of the Bigelow Preserve and Angus King's Highlands Project will have an array of turbines in view all along the Bigelow Range.  The iconic vista from Center Hill at Mt. Blue State Park and Tumbledown Mt. PRL will include King's Record Hill project and two projects by Patriot Renewables, including Saddleback Ridge in Carthage directly south of Webb Lake. 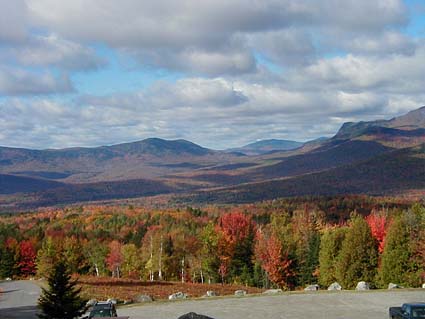 Above:  View from Center Hill at Mt. Blue State Park, with part of Tumbledown Mt. to the right.  Saddleback Ridge in Carthage, where Patriot Renewables wants to build an industrial wind site is just off the photo to the left.

Likely the worst is building wind turbines at the foot of Mt. Katahdin.  Already, as soon as hikers break out above timberline on the greatest mountain in the eastern USA, wind turbines are in view at Mars Hill, Stetson Mt., and now under construction, the ridges around Lincoln Lakes.  The entire range of ridges that create the eastern and southern uplands of the east branch of the Penobscot River is targeted for wind turbines in towns like Oakfield, Island Falls, Patten, Sherman, Staceyville, and Benedicta.  Right at the foot of Katahdin.

We honor Gov. Baxter for his gift of Mt. Katahdin and the great park to the people of Maine.  The highest peak on Bigelow Mt. is named for Myron Avery, the man responsible for pushing the Appalachian Trail from its proposed ending at Mt. Washington to its true end at Mt. Katahdin.  These men left incredible legacies for the mountains of Maine.  How morally bankrupt we are today to allow the mountains to be blasted away, scalped, and turned into sprawling industrial wind sites right on top of many of the most treasured natural resources of our state.  What would Percival Baxter and Myron Avery say?  Save the mountains! 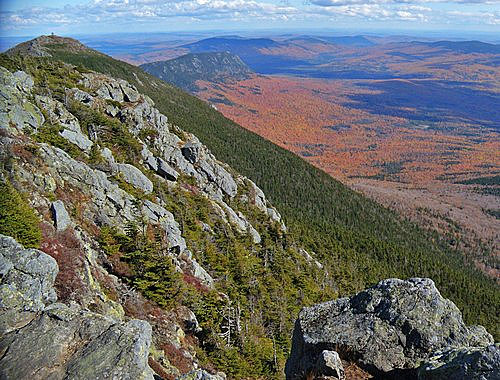