Look what they've done to my ridge; fix him up, I don't want his mother nature to see him like this

The commercial length has just doubled to :60.

U.S. Senate Independent candidate Angus King has an uncanny ability to look into the camera or otherwise into the audience and say something he knows couldn't be more misleading. There is never a trace of guilt or shame when he does this. What is this man made of?

The camp owners of Roxbury Pond are justifiably devastated by what King and his partner the Yale University Endowment have done to their hard won paradise with their so called wind farm. (Read: Useless subsidy farm).

King's PR machine would have you believe everyone there couldn't be happier with his "wind farm". After all, when Angus came to town he made some promises and one of these was that he would never build a project unless it was fully acceptable to the local community. Here's what his website said:

Unfortunately, we now see that in Angus King's world, it is not the affected residents who determine what constitutes "acceptability", but rather it is Mr. King. Angus King and his elitist partner Yale know what is best for the people of Roxbury. I guess they have saved these poor people from themselves. 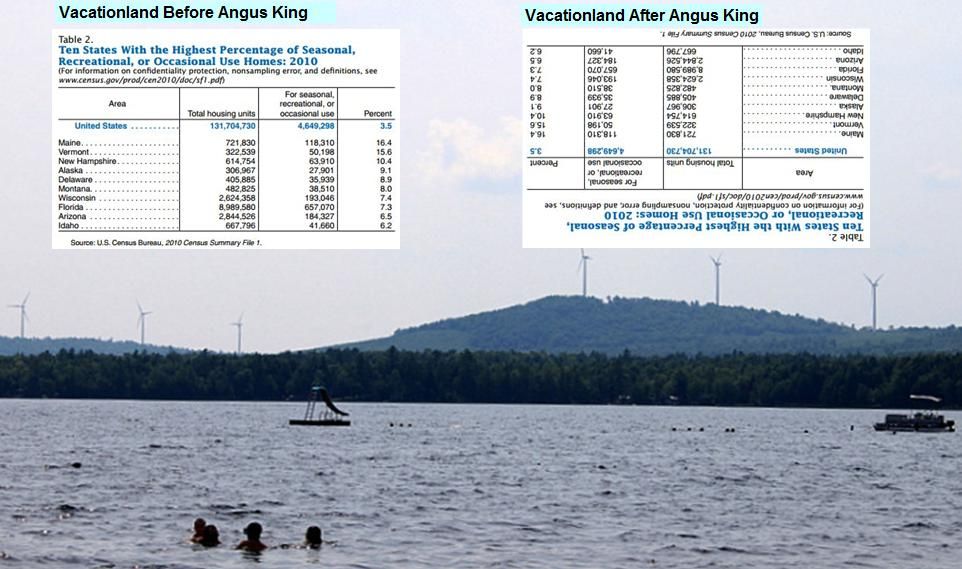 King and his ilk remind us of a pop song from 1972, called "The Backstabbers".

And now he has taken their places.

This is the man who looked into the audience and told Mainers that "Maine is the Saudi Arabia of Wind", knowing full well that this was a line used in countless other states to make people feel they were suddenly rich so that they would drop their guard, paving the way for his confidence game.

He is the man who has lectured Maine citizens about the need to minimize their carbon footprints yet he owns multiple large residences and multiple vehicles including a Mercedes RV.

He is the man who got a $102 million Department of Energy loan guarantee (that's YOUR money) stating that without such financial assistance they lacked the ability to go forward with the project (a loan guarantee criterion), all the while his partner was the $20 billion Yale University Endowment, hiding behind the shell company name, "Bayroot", also the name of a college drinking game.

While King and Yale have gamed the system, the taxpayer and the ratepayer, this is no game for the people of Roxbury, whose treasured lake and life sanctuary has been taken away.

But so long as elitist King and Yale have deemed this acceptable to them, he wants the voters of Maine to agree with his appraisal, not theirs. After all, Angus always knows best.

And he always knows how to get YOU to pay for it.

Calling King a Virginian is misleading. He was born and raised inside the Beltway, about five miles from Washington, D.C. proper. He was raised in an extremely political and politically connected family. For example:

Should we comment to his campaign HQ? He is a greedy Virginian who should retire and travel in his motorhome and tell others to cut their carbon.

"Angus King’s campaign called on the state’s TV stations Monday to pull a Republican ad from the air that he says is an inaccurate portrayal of his involvement in a 22-turbine wind project in the western Maine town of Roxbury. King and business partner Rob Gardiner held a 10 percent stake in the project until early 2011."

“The firm received $100 million in loan guarantees from the same federal program that backed Solyndra, but unlike the failed solar firm, it is repaying its loans.”

Why does the PPH keep printing half truths on Record Hill Wind? FERC data shows the wind project generated just $1.2 million and $0.8 million in energy and capacity payment revenue for the first two quarters respectively of 2012 when the interest only expense is $2.1 million per quarter on just $79 million principal of the DOE loan (per the Federal Financing Bank). $23 million of the DOE loan was due to be repaid on April 27, 2012 yet Record Hill Wind received an ARRA grant of $33.7 million on June 8, 2012. Record Hill received an aggregate of +$135 million on the project. How is funding over 100% of the cost of Record Hill Wind at taxpayer expense “doing the project right”? King’s company represented to both the Maine PUC and DEP that it had over $125 million in its bank account to fund the project before construction started and still relied on federal funding for the whole project. King’s$212K profit came from the taxpayers and only fools can’t see it.

This is the type of double-speak to expect from King if he is elected Maine’s next Senator.

King decries outside money “trying to buy” election, fundraises in D.C. the next day

Right on..tears in my eyes.