Real Clear Energy: Wind Will Be Difficult to Integrate into the Grid

Wind Will Be Difficult to Integrate into the Grid 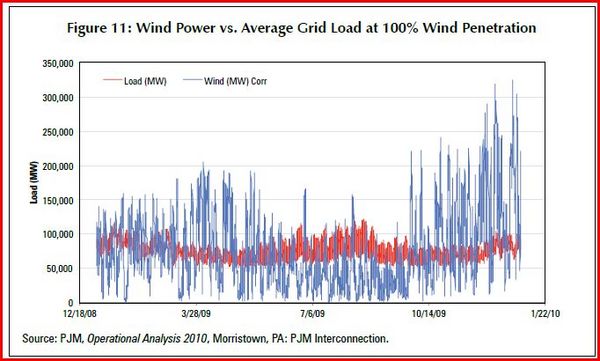 The electrical grid is a high-wire act in which supply must be matched with demand on a minute-to-minute basis. If supply surges above demand, electrical equipment everywhere can be damaged. (That’s why you have a “surge protector” between your computer and the wall outlet.) If supply slumps below demand, brownouts and blackouts can occur.

Although windmills have great energy potential, they produce electricity that is not “dispatchable.” In other words, it cannot be called at will by the operator but comes and goes as the wind blows. As wind energy becomes a larger and larger part of the electrical grid, the problem of matching supply and demand will become ever more difficult.

To illustrate the problem, the PJM (Pennsylvania, New Jersey, Maryland) regional grid has produced a line graph matching showing how actual demand compares with the projected output of a grid powered 100 percent by windmills.

The horizontal axis represents the two factors over a period from December 18, 2008 to January 22, 2010. The red line represents grid demand, which varies between 50,000 and 100,000 megawatts (MW) on a seasonal basis. The blue line represents wind’s output over the same period. Output varies wildly, from highs of more than 300,000 MW to lows of nearly zero. It is important to remember that these are not necessarily seasonal or even daily variations. The output of a windmill can fall from full capacity to zero in a matter of hours.

In all those periods where output falls below demand, wind will have to be supplemented by other forms of generation, most likely natural gas. In periods where its output exceeds the demand, the surplus electricity will have to be dumped unless technologies for utility-sized electrical storage can be developed. Currently, the only technology is pumped hydroelectric storage, which requires a large reservoir in a mountainous area, a rare combination.

Unless new storage technologies can be developed, the addition of wind capacity to the electrical grid will not be able to do much in reducing the use of other fuels. The important thing is not gross output but the matching of supply and demand.