NYSERDA chief to feds: No wind farms off Hamptons

Meanwhile, residents of interior Maine are lucky if monstrous wind turbines are not shoved to within a thousand feet of their homes. 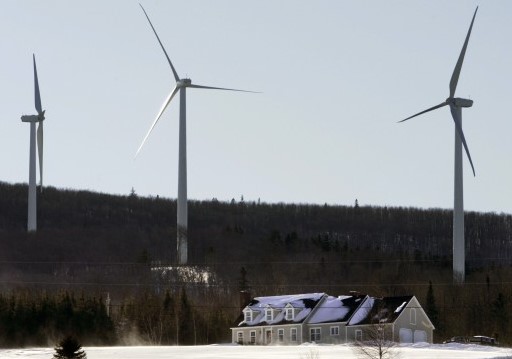 New York State will emphasize its position that windfarms off the Hamptons are a nonstarter as federal regulators begin the public process of auctioning off lease rights to waters off the South Shore.

In his recent speech after passage of the state budget, Cuomo mentioned the massive influx of new wind energy coming to the grid and the need for an energy "superhighway to get that green energy from Upstate, from Long Island, from the ocean to the markets that need it."

Of course these look like they aren't turning. They just reminded me of the consistent bizarre behavior of the wind turbines of the GWWEP.

The wind turbines shown with this article are pointing in completely different directions. When we lived among the Golden West Wind Energy project wind turbines they would regularly be spinning facing a multitude of directions that were meaningless to any wind. My husband took a lot of pictures of that wind project ignoring the whim of the wind.

My annual electricity consumption increased about 50% (the various taxes, fees, and surcharges also increased), after I installed three Mitsubishi, 24,000 Btu/h heat pumps, each with 2 heads; 2 in the living room, 1 in the kitchen, and 1 in each of 3 bedrooms.

The heat pumps last about 15 years.

They are used for heating and cooling my 35-y-old, well-sealed/well-insulated house. It has 2” of blueboard (R-10 vs <R-0.67 for 8” concrete) on the outside of the concrete foundation and under the basement slab which has saved me many thousands of heating dollars over the 35 years.

The heat pumps displaced about 300 gallon of my normal space heating of about 1,000 gal

My existing Viessmann propane system, 95%-efficient in condensing mode, is used on cold days, 15F or less, because heat pumps have low efficiencies, i.e., low Btu/kWh, at exactly the same time my house would need the most heat; a perverse situation, due to the laws of Physics 101!!

The heat pumps would be slightly more efficient than electric resistance heaters at -10F, the Vermont HVAC design temperature. It would be extremely irrational to operate air source heat pumps, “cold-climate” or not, at such temperatures.

I have had no energy cost savings, because of high household electric rates, augmented with taxes, fees and surcharges. Vermont forcing, with subsidies, the addition of expensive RE electricity to the mix, would make matters worse!!

If I had a highly sealed, highly insulated house, with the same efficient propane heating system, my house would use very little energy for heating.

If I would install heat pumps* and would operate the propane system on only the coldest days, I likely would have energy cost savings.

However, those annual energy cost savings would be overwhelmed by the annual amortizing cost, i.e., I would still be losing money, if amortizing were considered.

* I likely would need 3 units at 18,000 Btu/h, at a lesser turnkey capital cost. Their output, very-inefficiently produced, would be about 27,000 Btu/h at -10F, the Vermont HVAC design temperature.

NOTE: VT-DPS found, after a survey of 87 heat pumps installed in Vermont houses (turnkey cost for a one-head HP system is about $4,500), the annual energy cost savings were, on average, $200, but the annual amortizing costs turned that gain into a loss of $200, i.e., on average, these houses were unsuitable for heat pumps, and the owners were losing money.

NOTE: Standard weatherizing of Vermont’s energy-hog houses, at about $10,000/unit, would not make these house suitable for air-source heat pumps.

Zero-Net-Energy and Energy-Surplus Buildings: The best approach for New England is having buildings that are zero-net-energy, or even better, energy-surplus. It used to be difficult to build such buildings, but that is no longer the case.

- Have a large hot water-storage tank

- Have ground source heat pumps (they are efficient year-round)

- Be highly sealed, with less than 0.6 air changes per hour, ACH, as measured with blower-door testing.

- Be off-the grid with a generator.

The invested capital and subsidies, now wastefully going to RE that produces expensive grid-disturbing, electricity, should be going to such efficient buildings, i.e., put the cart behind the horse.

However, Wall Street, Warren Buffett, and GMP love these tax credits and fast write-offs, while playing the GW mantras to the hill.

The US, with a low-cost, self-sufficient, energy sector would attract European, etc., heavy-industry/industrial production to the US.

Maine is in active discussions to add 781 MW of wind turbines in Maine, according to ISO-NE the NE grid operator.

It will add 10 c/ kWh wind electricity to the Maine electricity mix, which has an average price of 6 c/kWh, and it will increase electric bills, while wind system-owning multi-millionaires are laughing all the way to the bank.

TRAGIC..but if anyone can stop them in NY it's the wealthy of the Hamptons while our woods and waters suffer...

Biden’s nutty energy policy will upset a lot of people, including millions of Democrats

Democrats will lose the US House and Senate in 2022, and the Presidency in 2024.

Trump will stop Biden’s idiotic open borders policy.
Trump will finish building the wall, the only sane way to stop the hordes of refugees from all sorts of godforsaken places.