What is their role in net-zero emission future

THE MASSACHUSETTS Department of Public Utilities on Thursday ordered the state’s natural gas utilities to jointly hire consultants and come up with a way to dramatically phase down or eliminate their businesses over the next 30 years.

The order is a response to Gov. Charlie Baker’s call for net zero greenhouse gas emissions by 2050. It asks for strategies to achieve that goal “while simultaneously safeguarding ratepayer interests; ensuring safe, reliable, and cost-effective natural gas service; and potentially recasting the role of LDCs [local distribution companies] in the Commonwealth.”

On a parallel track, the Baker administration in December is expected to release broad roadmaps for achieving greenhouse gas emission targets by 2030 and 2050. The DPU order piggybacks off that effort and asks the utilities to dig deeper into their industry and provide status updates on their progress on March 1 and again on September 1.

National Grid, which has 925,000 natural gas customers in Massachusetts between its Boston Gas and Colonial Gas subsidiaries, issued a statement said the company is seeking to reach net zero emissions by 2050. ” We know this cannot be achieved by maintaining the status quo,” the company said. “Though we do not have all the answers, we believe our electric and gas networks, which play a vital role in the lives of our customers, can be useful in achieving net zero emissions. We are eager to collaborate on solutions and look forward to expanding on our many decarbonization initiatives in pursuit of a cleaner and fairer energy system that leaves no customer or community behind.”
The whole effort to decarbonize the state’s economy hinges on using electricity to replace fossil fuels while simultaneously reducing the use of natural gas to produce electricity. On Thursday afternoon, 68 percent of the region’s electricity was coming from plants powered by natural gas, 17 percent from nuclear power, 8 percent from hydro, and 7 percent from renewables.

According to state figures, 51 percent of Massachusetts households heat their homes with natural gas, 27 percent with oil, 15 percent with electricity, 3 percent with bottled gas, and lesser amounts with woods, coal, and solar.

They stand at the edge of a physical and financial abyss, being pushed there by BUREAUCRAT RE proponents, and their self-serving subsidy chasers, who do not know their A from their elbow about energy, and have no idea regarding environmental impact and cost. 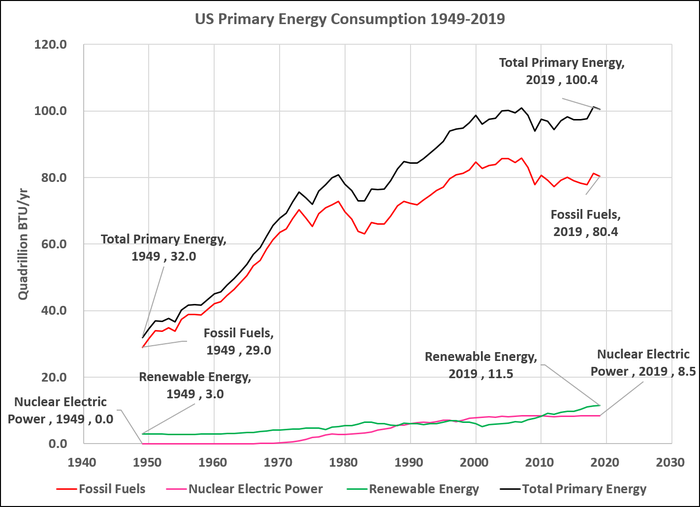 Here is a graph with the same data, but as percentages of US total primary energy consumption from 1949 - 2019.

For comparison, the wellhead price for natural gas is currently around $3.30/million Btu and the US residential price has averaged $10.55/million Btu since 2014.

If it were possible to replace fossil fuels with “renewables,” at $105.56/million Btu, it would cost just under $8.5 trillion to replace 80.4 quads of fossil fuels.

NOTE: The US primary energy consumption in 2019 was 100.4 quads, which is only 17% of world total primary energy, i.e., worldwide spending to replace fossils would be at least 5 times greater, or spending $2.8 TRILLION/y, if 2035, or 1.42 TRILLION/y if 2050. The later is close to my above estimate of $1.5 TRILLION/y. All this does not include the cost of financing, and the cost of replacing short-life items prior to 2050.

NOTE: It should be clear by now, replacing fossil fuels with renewables would involve enormous investments. 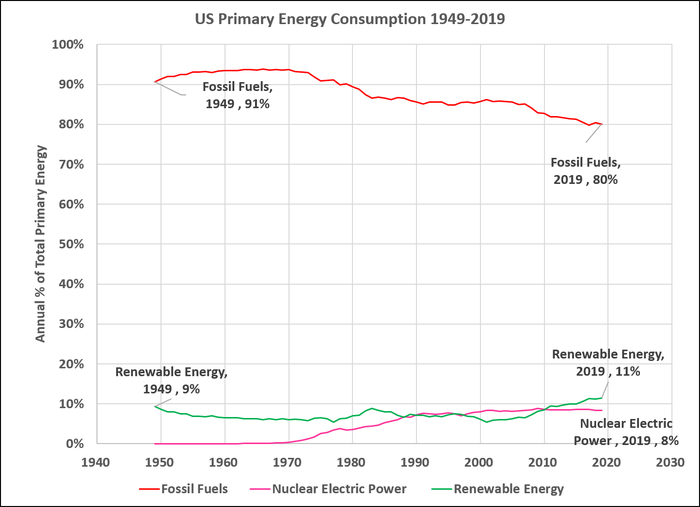 Upstream energy is the energy for extraction, cropping, processing, transport and distribution to users, such as electric power plants, transportation, industrial, residential and commercial.

About 10% of US primary energy is used to obtain source energy.

Based on the above, it is beyond ludicrous for New England to have any carbon taxes, and solar panels, and wind turbines, because they produce expensive electricity, which would act as a brake on NE economic growth. Here are some examples in Vermont. See URL for more information.

Real Costs of Solar in Vermont

SPECIAL OFFER solar (new, large-scale, field-mounted systems) are charged to the utility rate base at about 11 c/kWh.

SPECIAL OFFER solar (legacy systems) are charged to the utility rate base at about 20 c/kWh; that price is very slowly decreasing, as more 11 c/kWh systems are added to the mix.

UTILITY solar (new, large-scale, field-mounted systems) are charged to utility rate base at about 11 c/kWh

UTILITY solar (legacy systems) are charged to the utility rate base at 11 to 20 c/kWh; whatever price is negotiated.

Those costs do not include grid augmentation/expansion to connect the solar systems and dealing with the output variations of solar systems, such as daily DUCK-curves. Here is an example.

Cost Shifting to Ratepayers: Current cost shifting to ratepayers for solar production of 473,686 MWh, at end 2019, was about $64 million.

The increased solar would cause much larger, grid-disturbing, midday DUCK-curves. See VELCO graph in URL

Managing DUCK-curves costs money. The costs, about 2 c/kWh, are charged to ratepayers

The costs would be much higher, 15 to 20 c/kWh, if battery systems, with about 15-y lives, were involved.

Solar requires significant grid extension/augmentation. The costs, about 1.5 c/kWh, are charged to ratepayers

Solar is the most expensive electricity on the Vermont grid.

It would not be smart policy to have more of it.

- The output would be about 1,254 times greater from the same land area, i.e., about 12,540 acres of solar panels, located all over Vermont, would be required to equal the electricity production of one 500 MW CCGT plant.

- The CO2 related to: 1) making the systems and installing them, 2) disturbing the ground, 3) augmenting/extending the grid, and 4) dealing with DUCK-curves would be enormous.

NOTE: NE grid wholesale prices have been about 5 c/kWh starting in 2009, courtesy of low-cost, clean-burning, low-CO2 gas, and near-CO2-free nuclear.

NOTE: GMP buys nuclear from the Seabrook Nuclear plant to artificially/politically lower its CO2, on “paper”, without spending a dime to really reduce CO2.

Real Costs of Wind in Vermont

Ridgeline wind electricity is charged to the utility rate base at about 9.5 c/kWh, fixed price for 20 years.

Wind requires significant grid extension/augmentation. The costs, about 1.5 c/kWh, are charged to ratepayers

Wind requires the traditional generators to vary their outputs to counteract the variations of wind, 24/7/365. The costs, about 1.5 c/kWh, are charged to ratepayers.

NOTE: New England should focus on:

That would greatly decrease costs and CO2 of households and businesses, and make the New England economy much more competitive.

The fact remains, the WORLD is not making sufficient RE efforts.

It would take at least a decade to set that in motion on a world-wide basis.

Global warming is a WORLD problem, with a growing population that is aiming to have more prosperity.

Vermont, New England and the US could make major RE efforts, a la AOC, Bernie, Biden, etc., but they would not make one iota of difference.