Maine is Not Texas

Places like Texas and the Great Plains are the heartland of the nation's wind industry and accordingly, most thinking regarding wind power in the U.S. arose with states like those as context - states which are very different from Maine. Maine is 90% forest, Texas 7% and North Dakota only 2%. Only 9% of Maine's CO2 derives from electricity production, i.e., all that wind power can possibly reduce, however insignificantly. The same figure in Texas is 31% and 58% in ND. And of course Maine has almost no onshore "wind resource" compared to these states. And Maine has far more flammable resins and volatile liquids packed into its far denser vegetation.

The Maine woods, dense with combustible material, are in extreme jeopardy from wind turbine fires on remote and hard to access ridges during dry spells, which do occur, as all Mainers know. This is particularly true during periods of high winds which create greater friction in the turbines' gear boxes, filled with flammable lubricants.

Maine has already experienced two wind turbine fires (that were reported) in the short time that these machines have been introduced into the state. First, TransCanada's Kibby wind project in Franklin County and now this week's fire at the University of Maine in Presque Isle. The more time that goes by and the more turbines that get scattered throughout our most forested state in the nation, the greater are the chances of a massive and devastating turbine caused wildfire.

The Wind Industry Warns its Workers

That is how far they can easily throw debris, including burning debris. The math says that a 1,300' radius equals 122 acres, yet we keep reading that only 1.5 acres of forest is cleared for each wind turbine. Maine needs to establish a fire safety radius where each turbine sits in a cleared area of 122 acres, or probably more because the Vestas 1,300' radius was based on 389' tall wind turbines, not today's 500' tall turbines.

The full safety radius might be yet higher. This is evidenced by the Vestas Health and Safety Instruction Manual for a Falmouth MA wind farm. Page 10 of this manual addresses the situation of a free spinning "runaway turbine". In that manual, instructions are for no one to be allowed within a 1640 feet (500 m) radius. The math says that a 1,640' radius equals 194 acres.

There should thus be a requirement of a minimum 1,300' fully cleared fire safety radius around each wind turbine. The wind industry would of course vehemently object, fearing permitting objections based on environmental concerns. But what's more important, the Maine woods or these interlopers' fistfuls of money taken from the U.S. Treasury and coerced ratepayers? 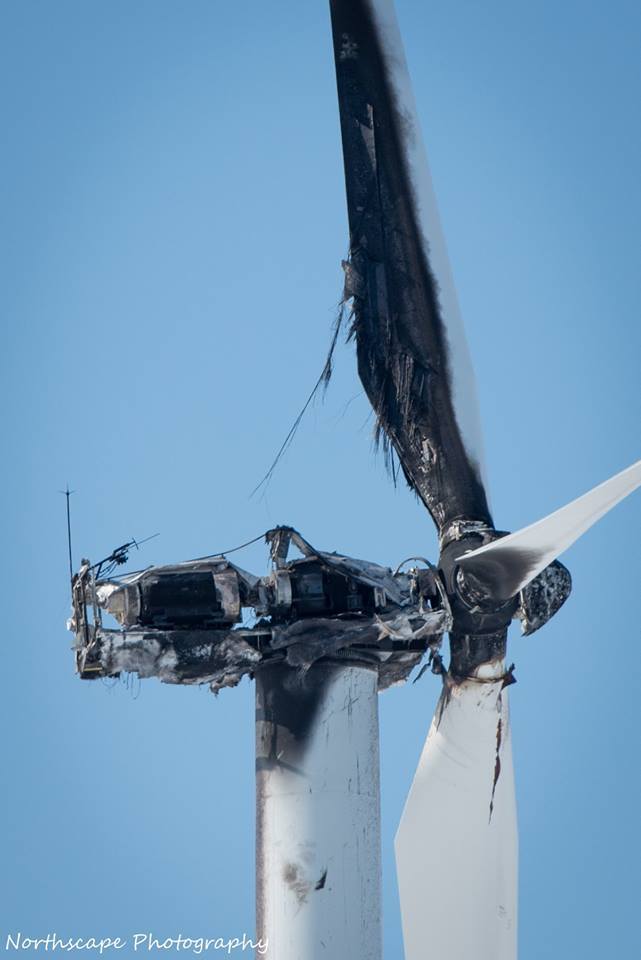 A simple calculator relating cleared acreage to fire safety radius may be downloaded at the following link:

All that I saw in the newspapers was:

This is what happens when we have close to a monopoly in the state's papers with Reade Brower owning all dailies except the BDN:

I wonder whether he's a front for S. Donald Sussman.

I informed a friend yesterday, who works for UMaine, about the UMPI turbine fire.  She had no idea the turbine had burned.  Not in the newspapers?