The Maine version of the Green New Deal, formally unveiled by its proponents recently and facing a public hearing this week, was at least introduced as actual legislation. That makes it a little less vague than its federal counterpart, albeit only slightly so. Its two most concrete components require electricity providers to switch to 80 percent renewable electricity by 2040 and require the Public Utility Commission and Efficiency Maine Trust to write legislation that lets public schools use a system of credits known as “virtual net metering” to discount their electric bills by participating in off-site community solar farms.

Given that state government can barely figure out a budget that works for two years at a time, it seems a little grandiose for the Legislature to require private companies to plan two decades down the road – after all, even the Soviets only had five-year plans. By 2040, we might be using entirely new forms of power or power transmission technology, or the public utility companies currently operating in Maine might not even exist. Long-term planning isn’t a terrible idea in and of itself, of course, but it seems silly for a government that operates in two-year cycles to make private companies come up with a two-decade plan. It’s especially ridiculous when one realizes that any future Legislature may eliminate or modify that statute at any time.

Part B creates the Task Force for a Green New Deal, which consists of 11 members including representatives of State Government, climate science, renewable energy, youth, labor and business.

Note above how "state government" is capitalized. I'm not sure if that's technically correct or just an upper case bow to the all powerful state.

The University of Maine at Presque Isle is committed to green energy but not necessarily to replacing its wind turbine that caught fire a year ago.

Ben Shaw, the university’s chief business officer, said the campus is considering solar or other renewable energy projects in addition to turbine replacement.

Note the IAT comes very close to the Oakfield Hills, home of the wind project which went up over the objections of neighboring Island Falls. Also note the trail's proximity to places where wind companies have applied for met towers. 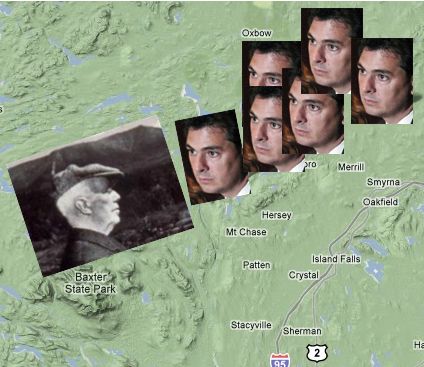 Hydro-Quebec Electricity Generation and Purchases: Google this URL for the 2017 facts. The H-Q electricity supply is an order of magnitude cleaner than the Vermont supply.
http://www.hydroquebec.com/sustainable-development/energy-environme...

This is for a mix of old and new contracts.

H-Q is eager to sell more of its surplus electricity to New England and New York.

That is about 50% less than ridgeline wind and large-scale field-mounted solar, which are heavily subsidized to make their electricity appear to be less costly than reality.

GMP sells to households at 19 c/kWh, per rate schedule, including taxes, fees and surcharges. Pricing for electricity is highly political. That is implemented by rate setting, taxes, fees, surcharges, etc., mostly on household electric bills, as in Denmark and Germany, etc. The rate setting is influenced by protecting State government “RE policy objectives”, which include highly subsidized, expensive microgrids, islanding, batteries and net metered solar and heat pumps.

Small and large water power is the best and cleanest source of truly clean power 24 hours every day! There is no way to better the best source of power we can make for free at no cost to the environment except for the cost of building the devices to generate! To compare to commercial wind power that causes more harm then it saves, just one ton of cement for the wind generator foundations puts one ton of Carbon Dioxide into your atmosphere as well as much heat and Carbon Dioxide etc.! Unless you are getting free Federal dollars, which pushes up the National Debt etc., to bring forward commercial wind power then it may not bother you about all of the taxation without representation that is involved with big wind power and some of our politicians! Our schools needs to get involved in small water power and solar power to energized themselves and the world! It has been stated that Maine has almost enough water power potential to supply power for the country what are we waiting for there are few jobs in Maine and hydro and solar power can give students jobs by the thousands! Students need roots to help them stand on their own they can not get job skill from European and Canadian sports that have taken over our school systems and pushed our health care cost to the point that we can not afford insurance, true or false! Students should compete with a better solar panel to display and share and not end up with broken bones, if we could not get insurance on our kids when they play head butting sports would we let them pound on each other the way they do for a gold ball, not likely? We must ask for more realistic training in schools so students can be and feel more self-reliant independent and capable of making it today without all the drugs and others ways to prop them self up artificially! Truly yours, Lenny Murphy 746-9212