In future Mass bids, offshore wind could be forced to compete with other "green" energy

NEW BEDFORD – The next time Massachusetts goes out to bid for renewable energy, offshore wind could have some serious competition.

The state Department of Energy Resources recommended Friday that Massachusetts buy another 1,600 megawatts of renewable power but open the bidding to all sources of clean, renewable energy, not just offshore wind.

Patrick Woodcock, undersecretary of energy, said the offshore wind market has matured enough to compete with other industries. At the same time, the number of companies that hold federal leases on locations for offshore wind remains relatively small.

Without more competition, “would there be market power enough to force them to sharpen their pencils?” he said.

Changing the 2018 law that called for more offshore wind would require legislation.

The state’s third-highest-ranking representative, Patricia Haddad, D-Somerset, has been deeply involved in offshore wind. Her chief of staff, Ken Raymond, said Monday that Haddad is “not unhappy” with the idea of expanding a future procurement to other energy sources.

But whether offshore wind is ready to compete with land-based turbines, solar or other sources remains uncertain, according to John Dalton, an electricity market analyst who consulted on Rhode Island’s purchase of offshore wind. Developers have to spend quite a bit of money just to prepare a bid, and competing with a whole universe of renewables could affect their willingness to do that, he said.

“One of the risks is it would increase the level of uncertainty that the offshore wind industry would see,” said Dalton, president of Power Advisory.

The purpose of the “carve-out” for offshore wind in existing law is to help develop an industry in southern New England and realize economic benefits, he said. Dalton said the focus on offshore wind is appropriate and provides the certainty the industry needs.

Sen. Mark Montigny, D-New Bedford, said Monday that he opposes mixing other energy sources with bids for offshore wind. The Legislature has made it clear that the state should develop a robust offshore wind industry, he said.

“Any attempt to disrupt this process as the price of wind has decreased will be met with opposition,” Montigny said in an email.

New Bedford Mayor Jon Mitchell, in an email, said, “The DOER report affirms what we learned in the last last wind energy procurement, that is, that offshore wind can deliver at competitive rates with other electricity sources. This is encouraging news, given that offshore wind happens also to offer the potential for the greatest job creation among all the available sources of renewable energy to Massachusetts.”

Vineyard Wind spokesman Scott Farmelant declined to comment, saying no one at the company had yet read the DOER report.

Ørsted welcomes the competition, according to spokeswoman Lauren Burm. She said the cost of offshore wind has dropped enough to make it competitive, and offshore wind can be built at industrial scale, close to major markets.

Electricity distribution companies Eversource, National Grid and Unitil have contracted for 800 megawatts of offshore wind as required under the state’s 2016 energy law. That contract went to Vineyard Wind. The state issued a second request for proposals May 23 to fulfill the remaining 800-megawatt requirement under the 2016 law.

In 2018, Gov. Charlie Baker signed a new energy law that called for DOER to study the benefits and costs of requiring the electric companies to buy another 1,600 megawatts of offshore wind. It also asked the energy agency to recommend improvements to the procurement process.

Wind electricity cannot be compared with hydro from HQ of with gas electricity, because wind (and solar) REQUIRE the support of the OTHER generators for peaking filling in and balancing.

THERE IS NO EQUIVALENCE.

There is NONE, ZERO, NADA reliability.

Here is a diagram when it was very windy.

It would be easy to simulate a diagram when it is not windy at all, which happens in winter (and summer), even offshore.

And those 5 days occur at random.

Go sell that nonsense to an idiot. "New Bedford Mayor Jon Mitchell, in an email, said, “The DOER report affirms what we learned in the last last wind energy procurement, that is, that offshore wind can deliver at competitive rates with other electricity sources."

That is assuming variable/intermittent wind, DEPENDING ON THE WEATHER, is EQUIVALENT to traditional sources such as hydro.

In fact, the traditional sources have to RESCUE wind 24/7/365 to provide peaking, filling in and balancing which could not possibly be provided by wind.

CO2 Reduction due to Wind Turbines Much Less Than Claimed

Studies of operating conditions of the Irish grid performed a few years ago showed, at 17% wind on the grid, about 55% of the CO2 was reduced due to wind, instead of the claimed 100%. At higher wind percentages, the percent CO2 reduction would be even less.

In Ireland, there were years of denial and ignoring of various studies by independent energy systems analysts. Dr. Fred Udo was one of the early analysts of the Irish grid to point out the discrepancy. He was ignored at that time. Another study showed the gas turbines operated near 40% efficiency at 17% wind, whereas, at zero wind, they operated at near 50% efficiency. At that time, the Irish grid had only a minor connection to the UK grid.

The undeniable tip-off was Irish gas imports, which had been predicted to decrease as wind would increase, but had, in fact, notdecreased as much as predicted. After much back and forth, the government finally launched an inquiry, which revealed the inefficient operation of the gas turbines at part load (more Btu/kWh, more CO2/kWh), due to the variable, intermittent output of the wind turbines, and their more frequent start/stop operations (high Btu/kWh, high CO2/kWh).

Since that time, the Irish grid acquired large capacity connections to the UK and French grids to spread the “discrepancy” over a much larger grid area, which makes it nearly invisible. A Brussels PR problem solved. See URL.

At the higher wind percentages, the NE percent CO2 reduction would be even less than 55%, i.e., expensive or inexpensive, variable/intermittent wind is no panacea regarding reducing CO2 and ameliorate global warming.

DUCK Curves: DUCK curves due to daytime solar, a minor problem in not-so-sunny Ireland, would impart an additional worsening of grid stability problems after solar would become a significant percentage on the NE grid at noontime in the future.

Dealing with the down ramping in the morning as solar is increasing, and the up ramping in the afternoon/early evening as solar is decreasing would impart additional cost/kWh on owners of traditional generators. They likely would be compensated by means of capacity payments by ISO-NE. Those payments should be charged to the disturbers, the solar system owners. However the payments likely would be socialized, i.e., charged to ratepayers/taxpayers. 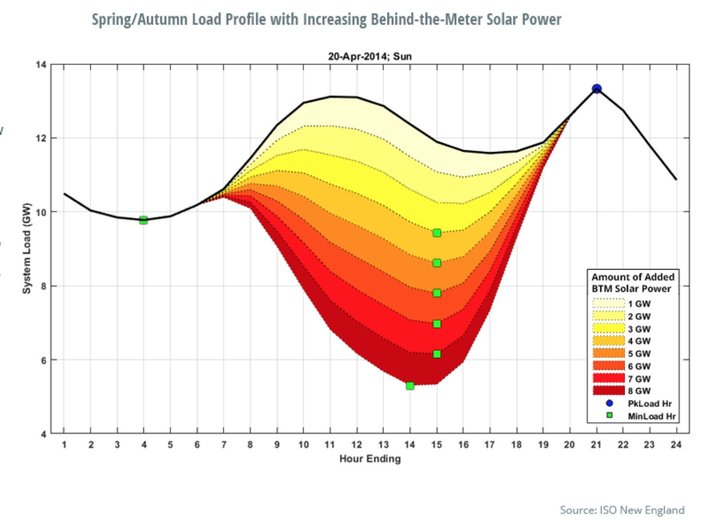 Multi-Day Wind/Solar Lulls: Also, during simultaneous wind/solar lulls, which occur at random throughout the year, and may last up to 7 days, a full complement of traditional generation plants and energy storage sources must be available, 24/7/365, to serve NE demand, including future EVs and heat pumps. That storage must be replenished in a timely manner to serve a second lull, which may occur a few days after the first lull. See URLs.

The mantra often promulgated by pro-wind folks is “the wind always blows somewhere”. However, weather systems tend to be 500 to 1000 miles long and wide. Any surpluswind electricity would have to come from at least 1000 miles away, which would require high voltage DC lines, as the transmission losses of high voltage AC lines would be too large, plus it would require very robust connections between the NE and nearby grids. Dealing with the wind/solar lull problems would impart additional cost/kWh that likely would not be charged to wind turbine owners but to ratepayers/taxpayers.