ABOUT THE AUTHOR
Karen Bessey Pease is a resident of Lexington Township.

I didn't want to be perceived as someone who was not interested in current events unless they directly affected me. I saw the acronym NIMBY as a slur, and no one likes to be insulted.

Several months have passed since I entered the fray. My education has been equivalent to the school of hard knocks. Trial by wind.

I knew nothing about mounting a battle to change the policy of a government that I strongly disagreed with. I had no idea how to work to defeat a proposal designed by a wealthy industry and supported by people in positions of power.

I'm still learning and every day I make a mistake. Most often, I learn from it.
As I researched the phenomenon of mountaintop industrial wind, I discovered many surprising facts.

I began this process with an instinctual aversion to the plan to develop our wild peaks, but I was lacking a lot of the details about the proposal to place wind turbines along over 300 miles of pristine summits. I only knew that it couldn't be a good thing; that the plan that was being thrust upon us did not seem to be a reasonable one.

Now I know what many of those negative impacts will be. I've also come to the conclusion that a NIMBY is exactly what I want to be.

We human beings have a lot on our plates: families to raise, jobs to go to, homes to build and maintain. We have to pay for those homes, those kids and the vehicles to get us to those jobs, which pay those bills. We have parents and siblings who need us. We have friends to help, schools to support and a civic duty to our town.

Life is busy, and often life is a struggle.

We simply cannot devote ourselves to every battle that needs fighting. We do not have the capacity to throw ourselves into the mix every time a wrong needs righting. Instead, we depend on others with the same values and common sense to take up their swords and defend their own territories, families and ways of life.

That's what "home rule" is, and it's one of the most fundamental precepts of America as a country. More elementally, it's instinctual in almost all living creatures. We defend our turf, or die trying.

The animal kingdom is made up of communities. The primary and most significant of these is the family; parents and children first, extending outward to grandparents, siblings, cousins.

Next in importance is our neighborhood, then the larger village which these neighborhoods combine to create -- those people upon whom we depend, but to a lesser degree than we rely on our kin.

When America was founded, our strength rested in the small communities scattered across this vast land. Men who provided for and took care of their families were called to action to defend the larger community -- the colonies that would later become the United States.

That is the heart of the matter. I care about what happens across the country and around the world. But I simply cannot make every battle a cause that I must wholeheartedly throw myself into. No one would survive if we took on every single struggle that we believed in.

We try to do our part when issues of importance are made known to us, but we have to keep something in reserve. We have to save ourselves for the conflicts that affect us directly because we know that our distant neighbors will only be able to aid us on the periphery, just as we do when they need our support.

I no longer have an aversion to the term NIMBY. It is synonymous with home rule and home defense, and that is something in which to take the utmost pride.

I am a NIMBY, and proud of it!

If my family, friends and neighbors are successful in protecting our home front, then we will set the standard for other NIMBYs -- our fellow countrymen who are doing the same.
We will be helping other Americans who have the courage to stand up and say "Not in my backyard!"

Comment by Joanne Moore on April 9, 2010 at 11:50pm
Wow. I just lover her writing! She has a wonderful blog, too, Grumbles and Grins. Full of more wonderful writing. If you haven't been there, do yourself a favor and visit. You won't be sorry. 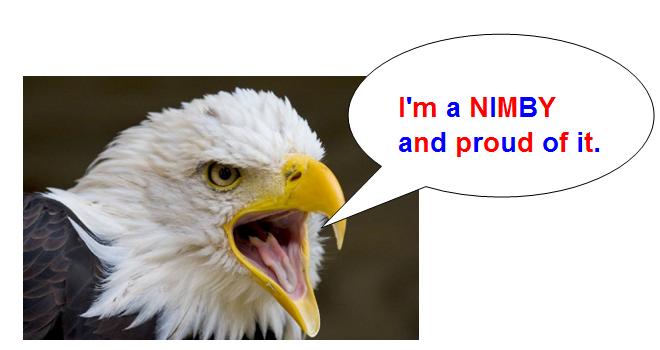