If Maine signals that it’s no longer friendly to wind power, he said, the global energy company will expand elsewhere.

GORHAM — The parent company of Central Maine Power Co. wants to develop large wind energy projects in Maine after the $1.4 billion upgrade of CMP’s transmission grid is finished in five years.
But any investments will hinge in part on policies that continue to support wind power development, said Ignacio Galan, chairman of Iberdrola Group.
If Maine signals that it’s no longer friendly to wind power, he said, the global energy company will expand elsewhere.
“We will be involved in this state once the transmission line is completed,” Galan said, “if the framework is here.”
Galan made his comments to The Portland Press Herald before a news conference and celebration to kick off CMP’s Maine Power Reliability Project.
The work will create 2,000 jobs during construction and $60 million in wages, according to CMP. It includes construction of 450 miles of new or rebuilt lines and five new high-voltage substations, similar to the one completed this summer in Gorham, where Galan took a tour as part of Tuesday’s event.
After the event, Galan went to Portland to see one of the first of CMP’s 620,000 old-style electricity meters being replaced with a digital “smart” meter with wireless, two-way communication.
The new meters will save CMP money and are expected to usher in a new generation of electricity management over a smart grid. The $166 million switchover, funded in part by a federal grant, will give Maine the highest concentration of smart meters in the world, Galan said.
While Galan expressed a strong desire to harness Maine’s land-based wind resources, he said Iberdrola isn’t interested now in developing offshore, deep-water wind power. The energy is too expensive and the floating technology is unproven, he said.
Iberdrola is Spain’s leading energy company and one of the world’s largest utilities. It acquired CMP when it bought New York-based Energy East in 2008. Income from Energy East helped offset declining profits in Europe in 2009, the company has reported in financial documents.
Iberdrola also is a global leader in wind power development, with an expanding interest in offshore projects. In the United Kingdom, where it owns Scottish Power, its Iberdrola Renewables subsidiary has formed a partnership to build the world’s largest offshore wind farm, with a capacity of 7,200 megawatts.
The difference between Maine and the United Kingdom, Galan said, is that the shallow waters there allow construction with conventional towers, and high electricity prices support the large investment.
But Iberdrola is staying abreast of Maine’s ambitions to become a research and development base for deep-water wind energy. That effort, supported by federal grants, is centered at the University of Maine.
Iberdrola officials in the United States have been in touch with the university, according to Habib Dagher, the professor who is leading the effort. Galan may not be aware of the contact, Dagher said, but Iberdrola’s construction staff is set to join him at a conference on offshore wind power next week in New Jersey.
Onshore, Iberdrola is heavily involved in wind power in the United States, through its Portland, Ore.-based subsidiary, Iberdrola Renewables U.S. The company has become the second largest wind operator in the United States, with 3,800 megawatts installed. It’s building a 74-megawatt wind farm in upstate New York and a 30-megawatt project in Vermont.
Iberdrola has said it plans to invest more than $6 billion in renewable energy generation in the United States by the end of 2012.
Following deregulation in 1999, CMP had to sell its generating plants. It can only distribute power, not sell it. But Iberdrola could build power plants and sell wholesale electricity through a non-regulated company.
Galan said it’s too early to talk specifically about where and when Iberdrola might develop its first wind farm in Maine. There’s plenty of time to study sites, buy land and seek permits, he said.
But Iberdrola needs a continuation of policies that encourage wind energy development in the long term, Galan said. On a national level, Iberdrola wants Congress to extend renewable-energy grants beyond 2012, and set targets for utilities to get a certain percentage of their electricity from renewable sources.
Galan mentioned Maine’s goal of installing 2,000 megawatts of wind capacity by 2015. The goal is in a law enacted by the Legislature with the urging of Gov. John Baldacci, who met with Galan last year in Spain during an energy trade mission to Europe.
During Tuesday’s interview, Galan was reminded that Maine is preparing to elect a new governor, and that the front-runner in the polls, Paul LePage, has said he doesn’t support the legislative wind goals. Galan said his company needs regulations that are predictable and stable if it is to invest further in Maine. It will expand in other states if Maine becomes hostile to wind energy, he indicated.
Galan’s statements agitated Maine’s wind power opponents, who said they suspected all along that the transmission line upgrade was motivated more by Iberdrola’s desire to develop wind power than any concerns about reliability.
“This makes it clear that the (transmission line project) wasn’t about replacing lines, it was about making Maine an industrial wind site,” said Steve Thurston, co-chair of the Citizens’ Task Force on Wind Power.
CMP has said that the 40-year-old transmission grid must be upgraded primarily to prevent future blackouts and ensure reliable service.
he $1.4 billion cost of the power line work is being shared by rate payers in New England, with Maine residents paying roughly 8 percent. To finance it, Iberdrola is selling gas companies that it owns in Massachusetts and Connecticut.
Whether or not it develops wind energy in Maine, CMP’s operation of the new grid will be very profitable. A rate of return set by the federal government for transmission projects will boost net income by about $100 million a year, the company has confirmed.

Staff Writer Tux Turkel can be contacted at 791-6462 or at: tturkel@pressherald.com
http://www.pressherald.com/news/CMPs-parent-Wind-power-development-... 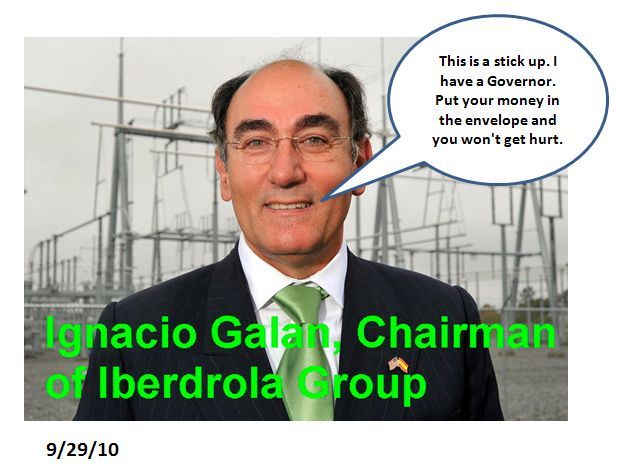 "If Maine signals that it’s no longer friendly to wind power, he said, the global energy company will expand elsewhere.“We will be involved in this state once the transmission line is completed,” Galan said, “if the framework is here.”Galan made his comments to The Portland Press Herald before a news conference and celebration to kick off CMP’s Maine Power Reliability Project".