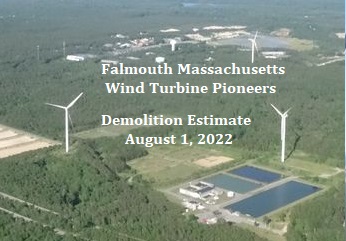 Falmouth, Massachusetts Wind Turbine Pioneers
In 2010 and 2012 Falmouth, Massachusetts residents became pioneers in the installation of two commercial wind turbines. The result was eleven lawsuits and multiple appeals and the demolition of the nuisance turbines coming up around August 1, 2022. They should never be placed in a residential community.
Believe it or not today in 2022 ten years later the Town of Falmouth is contemplating placing multiple high voltage onshore wind turbine cables and electric substations in their residential community also a vacation destination.
On June 8th the community displayed fierce opposition at a meeting held by the Falmouth Select Board.
Offshore wind companies are planning onshore electric cables of over 200,000 volts buried through residential neighborhoods to get to the existing electric grid in the most inexpensive way they can do it. Each cable landing will require a massive electric substation converting direct current to alternating current also a major source of dirty electricity in that community.
Environmental exposure to high-frequency voltage transients also termed dirty electricity, is an important biological active component of standard electromagnetic pollution.
Most high voltage studies access cancer risks, symptoms of multiple sclerosis, asthma and other respiratory illnesses, insomnia, well-being, tiredness, frustration, general health, irritation, sense of satisfaction, mood, etc.
There are two types of power in the United States AC, alternating current in your home, and DC, direct current for commercial and industrial use.
The United States has plenty of epidemiologic studies for AC, alternating current. There are none for DC, direct current as are only four high voltage direct current power lines in North America. Today there are no epidemiologic studies for HVDC in the United States.
The offshore wind companies are planning multiple landings along the East Coast using direct current power lines and power substations converting DC current to AC current.
There was a questionnaire sent by post and distributed by campaign groups in 1980 to people living near a 400,000 volt HVDC, high voltage direct current, overhead power line in Minnesota, followed up by telephone calls. The survey was called the "Minnesota Landowner Health Perceptions Survey."
Up to 35% of the respondents said they had suffered adverse health effects that they attributed to the HDVC power line.
An epidemiologic study was not conducted on the residents. This study and investigation could have compared two or more groups of people who are alike except for one factor, the 400,000-volt high voltage direct current power line.
The offshore wind started off the coast of Rhode Island in 2016. To date, there have been no epidemiologic studies of the four direct current power lines in North America.
The offshore wind companies have had six years to conduct epidemiologic studies of the four existing high voltage direct current lines in North America.