Funny, but as best I can tell, not a single person from Maine was interviewed for this article. Maybe the folks who leave their lights burning in their Fairfield County mansions need to hear from the people in Maine whose lives get turned upside down by these projects. Actually, to blame the people of Connecticut is probably not right as it's highly doubtful that the average person in Connecticut has even the remotest clue how they are getting nailed on their electric bills in the name of the wind power farce.

Note that NRCM has listed this wind farm on its website for several years. What do the insiders know that the people don't? 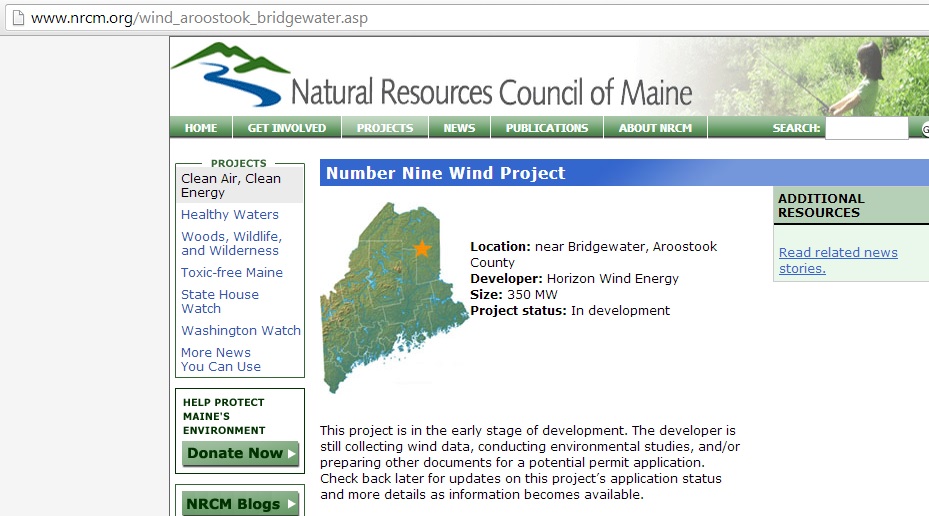 I submitted the following as an Op-Ed on the CT Mirror:

Shame on Connecticut for choosing to promote destruction of a region in the state of Maine for their ill conceived, arbitrary, ideologically based RPS whim.  Sept. 20 "Esty makes renewable choices: Maine wind, CT sunshine"  Destroy your own damned state with 500 foot tall turbines on blasted away. leveled, and scalped ridges!  The developer of "Number Nine Wind Farm" is EDP Renewables North America, formally Horizon Wind, which has been knocking around Aroostook County for years with no success.
The project will be in T8 R3, which means it is in the middle of nowhere, out in over-harvested forest due west of Mapleton in Aroostook County.  Being a native of this region, I can attest that it is a land of low ridges, which translates to no wind potential.  The NREL wind potential maps, which have been remarkably accurate, show this to be "poor" to "marginal" wind potential. The region will have lower output than the Stetson Wind site, which is due south by about 50 miles.  In 2012, Stetson I had 21.4% capacity factor and Stetson II had 18.4% capacity factor.  That means the 250 MW ends up being an unpredictable, unreliable, grid-disrupting and non-dispatchable 25 MW.  What makes either EDP or State of Connecticut think that this is a worthwhile project?  It makes Connecticut DEEP Commissioner Dan Esty look like a raving lunatic when he says "We are very elated".
Compounding the problem is lack of transmission capacity, as the only line that could be used now would be the MEPCO line, which is dedicated to baseload power imported from New Brunswick and unless NY City and the rest of the northeast want rolling brown-outs, this line won't carry wind power.  It was developed as part of the strategy to avoid another northeast black-out.  Thus, either a parallel line to this route must be constructed, with a lengthy tie-in from the site or the Number Nine project must tie into the line that First Wind has proposed from Oakfield to Chester.  Providing access to this line would preclude First Wind from doing more projects, as these lines have limited capacity and, unfortunately for the wind companies, must be designed for the few days per year when the wind sites actually crank out their capacity.  Either way, ISO-New England, the grid operator has already cited congestion on the new 345 kv line (the $1.4 billion MPRP expansion) south of Orrington.  It is absurd to believe that the added expense of overcoming the transmission problem is worth 50 MW of wind power from the boonies of Maine!
I do not support RPS because it is a heinous mandate and it is anti-free market.  However, if the state of Connecticut wishes to mandate more "renewable" electricity, it would be better for ratepayers in CT and better for protecting the mountains of northern New England from the ravages of sprawling ugly industrial wind sites if the state were to tap into Canadian hydro.  At the present time, Churchill Falls in Labrador is being developed as the world's second largest hydroelectricity generating site.  The Canadians will have a plentiful, reliable, and dispatchable supply of market-priced electricity for the northeastern USA.

D. The reduction in electrical rates among all classes of Maine ratepayers, directly attributable to and expected from the proposed wind energy project;

another wind project that will produce a bit of power, but power the nE grid cannot use as it already has refused to accept some wind powered electricity from Maine and Vermont. Meanwhile, Germany's top economic advisers have called for an end to wind power as its economy cannot withstand the expensive, unreliable wind power it has while Germans continue to pay the highest electric power rates in Europe, thanks to wind.