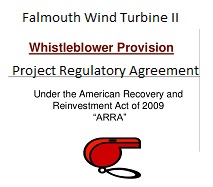 General Electric a domestic wind turbine company refused to place a single small wind turbine because of safety, residential home setbacks, and ice throw to a nearby neighborhood. A KEMA Inc map from 2005 five years before the first wind turbine installation showed a General Electric turbine would generate 50 decibels of noise on Black Smith Shop Road.
The Vestas foreign made wind turbines were known to be at least twice as loud as the General Electric domestic wind turbines.
To make matters worse the Falmouth Wind II needed a federal EPA waiver to buy a foreign wind turbine with loan proceeds from the ARRA, American Recovery and Reinvestment Act of 2009. The EPA waiver was granted despite General Electric a domestic wind turbine company refusing over safety issues.
The federal EPA waiver referenced the Town of Falmouth filing Special Permit 240- 166 to install Falmouth Wind II and in addition KEMA Inc the company hired by the state designated the Special Permit process as a means to install the wind turbines. The permit process required additional notification to the neighbors, more noise studies, and notification to the Falmouth Zoning Board.
The state of Massachusetts was the original owner of Falmouth Wind I and had all the specifications including the noise levels that could be emitted at 110 chest pounding decibels of noise equal to a hard rock band playing 24/7.

Fraud, Waste, and Abuse...What is it? 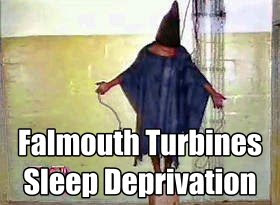