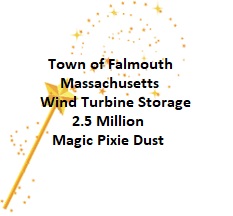 Falmouth Wind Turbines For Sale -Paying To Go In Storage
Falmouth Town Meeting November 12, 2019 - 2.5 Megamillions Needed To Put Wind Turbines In Storage For A Second Time.
This isn't the first time these old gear drive 110 decibel wind turbines have been in storage.
2008 For Sale: Two wind turbines, made by a highly regarded manufacturer, top blade height of nearly 400 feet, each capable of generating power for about 1,000 homes.
That’s not exactly how the Town of Falmouth worded a posting on its Web site but it was how the Massachusetts Technology Collaborative, a semi quasi-state agency now known as the Massachusetts Clean Energy Center listed the same turbines during 2008 over a decade ago.
The semi quasi-state agency now the Massachusetts Clean Energy Center using money from the state’s ratepayer-funded renewable energy trust fund, ordered the turbines in December 2005 for $5.2 million.
The turbines sat in storage from 2005 to 2010 paying roughly $3,500-a-month storage costs for the windmill parts at facilities in Texas and Canada.
The state held an auction to sell the turbines in which no one bid on the old turbines.
The state agency eventually had to give the Town of Falmouth one million dollars to take the old gear-driven wind turbine off their hands. After 2010 both these wind turbines ended up in Falmouth Massachusetts.
These exact types of 1.65-megawatt gear-driven wind turbines each generating 110 decibels of noise were installed in Falmouth between 2010 and 2012.
The next ten years resulted in up to eleven lawsuits with Falmouth Town Meeting approving millions in legal fees and up to 200 neighbors spending an equal amount defending their health and property rights.
By June of 2017, the Falmouth Zoning Board and Massachusetts courts shut down both Falmouth town-owned wind turbines.
In January of 2019, the Falmouth Select Board decided the shutdown antiquated 15-year-old wind turbines are an asset worth between 5 and 10 million?
The turbines which started their life in long-time storage and then ten years of litigation appear to be more of a liability than an asset.
Falmouth Wind II the second wind turbine has a 4.8 million outstanding loan plus interest brokered by the Massachusetts Department of Environmental Protection using federal stimulus funds from the American Recovery and Reinvestment Act of 2009. The loan is due now.
The Falmouth Select Board is requesting Falmouth Town Meeting on November 12, 2019, to approve 2.5 million and more down the road to put the old wind turbines back in storage like 2008 to sell the turbines at a later date.
These type of wind turbines can be taken down in a controlled explosion for less than one hundred thousand dollars ( $100,000)
The Town of Falmouth must have something in their drinking water or maybe it's just magical Pixie Dust.