Jeremy Payne, the director of the Maine Renewable Energy Association, disagrees with the premise that short-term jobs might not be useful.

“Nothing is said about the temporary nature of construction jobs for roads and bridges, and yet for some reason it is frequently talked about as it relates to renewable energy build-outs,” says Payne.

“I think the bottom line is: You’re not talking about a 30 MW potential. In Aroostook County, you’re talking about hundreds, if not thousands, of megawatts.”

By Bridget Reed Morawski
EXCERPTS - go to link below for full read.

Although northern Maine has long tried to draw on its natural resources to provide renewable power, the region hasn’t been able to fully tap into that potential.

But now work is underway to boost generation of clean electricity in Aroostook County and direct that power south, while creating jobs and economic opportunities in the rural area.

Under a 2021 state law, the Maine Public Utilities Commission is looking to connect amore renewable power sources with ISO New England, which operates the power grid across six states, including most of Maine.

The law calls for new wind and solar generation to help meet Maine’s energy and climate goals, in addition to biomass facilities to support the regional forestry industry.

A request for proposals, published last November, seeks “viable and cost-effective” projects for portions of Aroostook and Washington counties. Bids for transmission projects were due in March, while proposals for renewable generation were due in early May.

Most of the bids will remain confidential until November, although one company, Con Edison Transmission, has chosen to publicize its proposal.

Maine Senate President Troy Jackson, who championed the legislation, says he’s been told “bids are going to come in as good if not cheaper than what we’re paying right now” for electricity. But he adds a caveat.

“The intent was that there’s a lot of low-cost power in Aroostook that needed to get out, had a chance to get out, but the transmission [issue] was holding it up,” he says. “If it costs more to ratepayers, I don’t support that.”

But cheaper power for county residents won’t be a direct benefit, some say.

Maine Public Advocate William Harwood points out that nothing in the commission’s RFP indicates the potentially cheaper power would be sent to northern Maine residents, who generally aren’t connected to ISO New England.

That’s because the County isn’t directly connected to the New England power grid. Instead, an organization known as the Northern Maine Independent System Administrator does, acting as the “referee for sellers and buyers in the market,” Harwood explains. Versant Power serves as the grid’s operator.

Any extra energy is then pushed through New Brunswick’s transmission system before being redirected to ISO New England’s grid. The process results in higher costs for northern Maine.

“That’s made it basically untenable to have any generation that’s beyond what’s actually going to get consumed locally here,” says state Sen. Trey Stewart, R-Aroostook. He pegs that regional demand at around 70 megawatts.

Work that results from the RFP won’t unhook northern Maine from the Canadian grid, according to Harwood. However, there could be potential to later build transmission infrastructure between the new projects and Aroostook County.

In Harwood’s opinion, the RFP won’t do much to lower rates for Mainers in the region. Their prices might go down “indirectly” if there is a reduction in ISO New England’s prices and power is then routed up through New Brunswick, Canada, and back into Aroostook.

“But that’s a bit of a stretch,” Harwood says.

Jackson doesn't agree that cost-savings for Aroostook County ratepayers will only be indirect.

"Yes, we won't actually be getting the actual electrons [from any new generation facilities], but because that much more power is coming into New England - low-cost power - that's going to drive down rates," he said. "The same way that whenever natural gas goes up and drives up rates, we pay higher rates for electrons that aren't produced by natural gas, but because the market is driven the rates up, then we pay more and conversely whenever we have this much power that drives down rates, although we're not getting those actual electrons we will pay less money."

"It's just supply and demand ... and that's going to effect Aroostook County rates, too," he added.

If the business is part of a larger company with units spread across the country, the local unit can be at a disadvantage.

He believes there are several reasons the Legislature hasn’t taken more action on the idea until now. They include current concerns around energy prices, as well as wind-power developers previously going “at it on their own” to pitch a project without much community input.

Jackson also thinks it now helps that he’s the first Maine Senate president to hail from Aroostook County in over half a century.

“We’ve been dealing with electric rates that are just killing people across the state and have people really on edge about how they’re going to make it through these winters,” he says.

“So I think with all those things wrapped together and a Legislature that also understood there’s an opportunity to get lower-cost energy right here in Maine — homegrown, made-in-Maine — then why wouldn’t we at least try to want to take that opportunity?”

Mr. Jackson, the scam king, is taking advantage of the current price volatility of natural gas which, nationwide, is the most abundantly used resource to provide reliability to the grid. It has replaced coal, oil and nuclear plants that have been forced to retire by federal and state policies. Without natural gas, the electric grid fails. It's that simple.

But, natural gas is plentiful. It can meet demand if given a chance. Government policies have driven demand for natural gas into the stratosphere while driving the extraction into a standstill and prices have soared so much that wind, solar and battery storage can compete without subsidies and government policy advantages.

Wholesale prices of electricity are averaging $90 per megawatt-hour (over 3 times the price of just two years ago) driven by high natural gas prices. A repeal of the regulations currently choking off extraction would bring plenty of natural gas to market and prices would drop considerably.

It would be a monstrously unwise move if the PUC accepts offers from any generation from Jackson's folly that is more than $26 per megawatt-hour, the average wholesale energy price of 2020 for New England.

Wind, solar and battery storage is unreliable and non-dispatchable and should be discounted well below $26 per megawatt-hour before anyone considers allowing it to corrupt the grid. Say $10 per megawatt-hour or no deal. That still gives them generous subsidies and financial policy advantages over natural gas, but, in the short term, ratepayers could be protected from ungodly price hikes and threats of blackouts.

Jackson wants us to think $90 per megawatt-hour is the new normal. It is NOT. A reversal of current federal and state policies along with rejection of ESG which has infiltrated banks and investment firms would easily bring back inexpensive electricity.

If Jackson had any balls, he would accept the debate offer from James LaBrecque and he could even bring Saviello with him

Some communities in Aroostook do have protective ordinances, but not many. Rest assured that most of these proposed projects are planned for townships and plantations in the Unorganized Territory, where there is no zoning.

When they had the opportunity to "opt out" of the Expedited Wind Area, only two Aroostook UT townships did so. Those were Cary and Molunkus.

Take a look at the attached map and note that a massive chunk of Western Aroostook County is NOT in the Expedited Area, which means projects there would be subject to the old traditional permitting process.

When First Wind was in its heyday, running roughshod over Maine, they were reputed to have made land deals from Route 11 westward across the Allagash and St. John Rivers all the way to Daaquaam. The most remote wilderness east of the Mississippi.

Don't be surprised to see Mr. Jackson submitting emergency legislation to get those places into the Expedited Area. 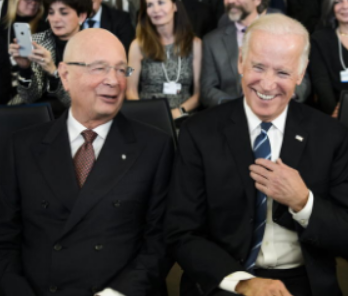 Is Klaus Schwab the Most Dangerous Man in the World?

Why does wind pusher Klaus Schwab have a bust of Lenin?
https://www.youtube.com/watch?v=EeXjEQW03uY

What a total cornball........ who also happens to a member of the green cartel.

With wind projects, most economic benefits are never disclosed because the money leaves the area  and will never benefit communities.  For the life of a project, these numbers are staggering with up to 99% of the benefits going to the applicants and their associations.  What a great deal. communities might get 1% of the money but they get stuck with 100% of the impacts.

Under these conditions, Mr. Jackson, who gives a shit about a few token jobs?