You're probably aware that Maine's wind law created a large area that is "pre-zoned" as suitable for wind development. This means a wind developer can apply for a permit to build a project in that area without having to have the site re-zoned (the way every other industry would have to). The area is known as the expedited wind permitting area (EWPA). It was the wind developers themselves who decided what townships, etc. would become "expedited" (see proof here) and they did so without regard for the wishes of the citizens. Those of us lucky enough to live in organized towns have the right to enact ordinances restricting wind development but our neighbors in unorganized municipalities do not share that right.

Thanks to the expert and tireless efforts of Alan & Kay Michka, Karen Bessey-Pease and others, LD 828, An Act To Improve Regulatory Consistency Within The Jurisdiction Of The Maine Land Use Planning Commission, was passed by the legislature.  Governor LePage signed it into law in June of 2015.

LD 828 allows registered voters in any UT, township, plantation or municipality in the EWPA to petition the state to be removed from the EWPA. The process is described in detail on LUPC's website (   http://www.maine.gov/dacf/lupc/projects/wind_expedited_area/wind_ex...  ). 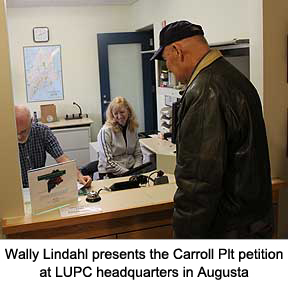 At 8:10am on January 4th, Carroll Plt resident Wally Lindahl presented to LUPC a petition signed by Carroll residents/voters asking that Carroll Plt be removed from the expedited wind permitting area. Carroll is the site of the four-times denied Bowers project. The moment Wally handed the petition in, Carroll became temporarily protected from future wind development. Many thanks, Wally, for collecting the signatures and driving 150 miles to be at the LUPC office when it opened at 8am! Nineteen other municipalities also filed petitions to be removed from the EWPA.

If no person requests the substantive review of the petition within 45 days, Carroll Plt will be automatically and formally removed from the expedited area. This does not prohibit wind development. But it does means that before a developer can submit a permit application, they will first have to get LUPC to agree to zone the Plt as being appropriate for wind energy project. While all other industries must clear this hurdle for all projects, the wind industry in Maine considers this an unfair nuisance.

Whether there is a hearing or not, LUPC will review all of the evidence, including public comments, and make a decision about whether the following two statutory review criteria are satisfied:

Criterion A. The proposed removal will not have an unreasonable adverse effect on the State’s ability to meet the state goals for wind energy development

Criterion B. The proposed removal is consistent with the principal values and the goals in the comprehensive land use plan adopted by the Maine Land Use Planning Commission

If these two criteria are met, Carroll Plt will be formally removed from the EWPA.

That's the good news. The bad news is that in an arrogant disregard what Mainers think, Jeremy Payne, Director of the Maine Renewable Energy Association told Channel 6 News that he intends to challenge all the petitions and request that LUPC conduct substantive reviews of each one. If the Carroll petition goes to a public hearing, PPDLW is ready to fight tooth and nail to see that the decisions of LURC (2012), DEP (2013), BEP (2014) and the State Supreme Court (2015) are upheld and that the Downeast Lakes remain free of turbine views.

The fight to protect the Downeast Lakes Region
from wind development may be over... or it may not. 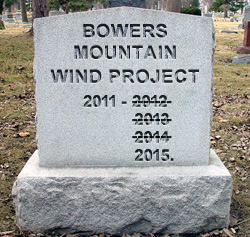 'Mad Money' Lightning Round: Stay Away From SunEdison

"This one looks like a dead cat bounce. Stay away."

Organized towns now have the right to opt out of the EWPA, and here are a few reasons why they should.

If we don't exercise our rights, (to opt out), we surrender our rights.

LOS ANGELES--(BUSINESS WIRE)--Lundin Law PC announces it is investigating claims against SunEdison, Inc. (“SunEdison” or the “Company”) (NYSE: SUNE) concerning possible violations of federal securities laws. The investigation is related to allegations that certain statements issued by SunEdison were false and misleading and/or failed to disclose material information regarding the Company’s financial performance.

Better do everything  you can, so they don't try it again!

They are liars ,thieves and SOB's as you know .

Be vigilant to preserve your gains, and well done PPDLW et al.

A huge thanks to everyone who worked so hard for LD828.  Hopefully this will create "a tombsone every mile".