Give Vaclav Smil 5 minutes and he'll pick apart one cherished scenario after another. Germany's solar revolution as an example for the world to follow? An extraordinarily inefficient approach, given how little sunlight the country receives, that hasn't reduced that nation's reliance on fossil fuels. Electric semitrailers? Good for little more than hauling the weight of their own batteries. Wind turbines as the embodiment of a low-carbon future? Heavy equipment powered by oil had to dig their foundations, Smil notes, and kilns fired with natural gas baked the concrete. And their steel towers, gleaming in the sun? Forged with coal.

"There's a lot of hopey-feely going on in the energy policy community," says David Victor, an expert on international climate policy at the University of California, San Diego. And Smil "revels in the capability to show those falsehoods."

Vaclav Smil: A Critical Look at Claims for Green Technologies

Think about an Asian megacity hit by a typhoon for a day or two. Even if long-distance lines could supply more than half of the city’s temporarily lowered demand, it would still need many gigawatt-hours from storage to tide it over until intermittent generation could be restored (or use fossil fuel backup—the very thing we’re trying to get away from). Li-ion batteries, today’s storage workhorses in both stationary and mobile applications, are quite inadequate to meet those needs. The largest announced storage system, comprising more than 18,000 Li-ion batteries, is being built in Long Beach for Southern California Edison by AES Corp. When it’s completed, in 2021, it will be capable of running at 100 megawatts for 4 hours. But that energy total of 400 megawatt-hours is still two orders of magnitude lower than what a large Asian city would need if deprived of its intermittent supply. For example, just 2 GW for two days comes to 96 gigawatt-hours.

"especially appalling to me as an outdoorsman (ME native) is the re-casting of so many ME issues as climate change-driven. i have news. the climate is not trying to kill anyone in ME, nor in most places. if you believe serious scientists - i do - humans are so insignificant compared to the vast powers of nature to radically alter climate that it is laughable to think co2 or industry can do anything near what climate alarmists claim. the climate scare is simply another false fear model for more central control of anything elites want from the masses, including $ for carbon taxes and credits, regulation of poor nations' development plans, and perhaps worst of all, massive new debt on the backs of generations of tax payers to fund 'green' tech that is not needed (wind), does not work (wind), and further entrenches power of the FED and other banks v the 99%. the OAC 'green deal' is an obvious pol-ec fraud in green drag. the show is entertaining to some but not remotely what it proposes to be."  Harold Burbank

Here is the URL of the storage article

Power Sources: Here is an example of grid-scale storage for the NE grid with a load of 125 TWh/y. Assume the power sources would be:

5) A few percent of Canadian hydro via tie-ins to nearby grids.

6) All coal, oil, gas and nuclear plants are closed.

Mode of Operation: The mode of operation with grid-scale storage would be:

- All wind and solar generation, plus other generation would be stored.

- Steady electricity would be drawn from storage, based on demand.

- The storage system would perform peaking, filling-in, and balancing services

- The daily demand of about 125 TWh/365 = 0.342 TWh would be kept near constant by means of real-time supply and demand management.

Comments on Energy Balance: The below graph is based on minute-by-minute generation and demand data published by ISO-NE, the grid operator.

- High outputs of wind and hydro are in excess of demand in the early months of the year; storage is increased.

- Low outputs of wind and hydro are less than demand during summer; storage is reduced, because solar in summer is nor sufficient to offset the reducing trend.

- High outputs of wind and hydro are in excess of demand in the later months of the year; storage is increased again.

Maintaining Minimum Storage: The storage system would need on-demand standby generation, such as hydrogen or natural gas powered combined-cycle, gas turbine, CCGT, plants, to maintain about 3 TWh in storage at all times, i.e., about 3/0.342 = 8.8 days of demand coverage, to cover:

Future Grid Load: Demand is likely to increase to about 175 TWh by 2050, an increase of 40%, due to heat pumps and electric vehicles, which means grid-scale storage would need to be at least 14 TWh. 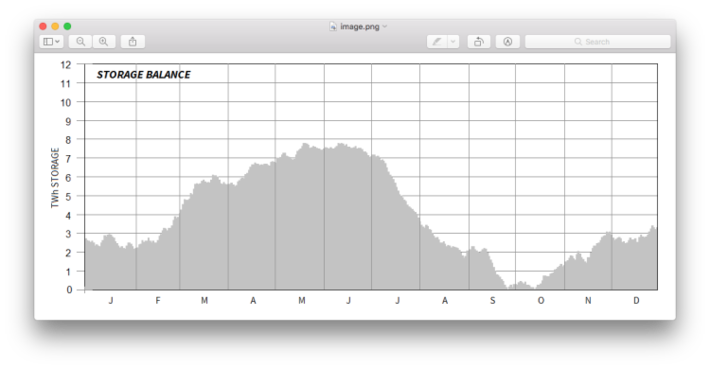