When and where has ABC benefited birds and raptors by stopping any major wind projects?

Will this court case lead to a big cash settlement that sells out all these bird species????? This is what took place with Audubon at Altamont and now more eagle carcasses are being found around the Altamont turbines than ever before.

ABC claims they are all for responsible wind energy (see below). Yet when and where has this ever taken place??????  How could wind energy ever be considered responsible when this industry has been producing fraudulent mortality research for decades???  This ongoing industrial fraud on Americans, had been hiding a slaughter to thousands of eagles and millions of birds annually.

When has ABC birds ever demanded honest scientifically sound mortality research around wind turbines requiring the disclosure of all carcasses?

I will remind ABC BIRDS that the resurgence of the bald eagle, which is considered to be one of America's greatest conservation success stories, is not over. In addition this success only took place because the "people" finally stood up against an industry lying about the impacts of DDT.  I am fighting against the wind industry for the same reasons, but now we have an industry and government lying together about the horrific impacts of wind turbines.

This should be ABC's fight and they need to start telling the world just how terrible these monsters really are. They should also strip every reference on their website to data taken from bogus wind energy research because none of it is true.

Lastly if ABC does not ask for any advice or opinions from me, the guy that uncovered the 35,000 plus eagle carcasses secretly shipped to the Denver Repository since 1997 and exposed this industry's mountain of fraudulent mortality research...............It will speak volumes about ABC's intentions. 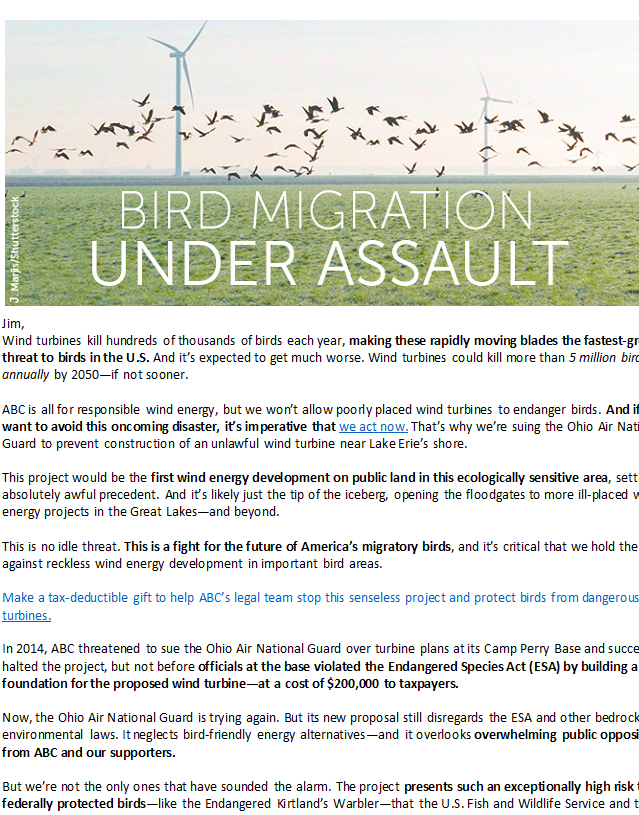 ABC was the first environmental group to make noises about the dangers of wind turbines.  I hope they stick to their guns.  If they're sending these fund raising messages to all their members and posting them on their facebook site, that's good.  The "all for responsible wind energy" is the typical PC statement made to appease the brainwashed masses.