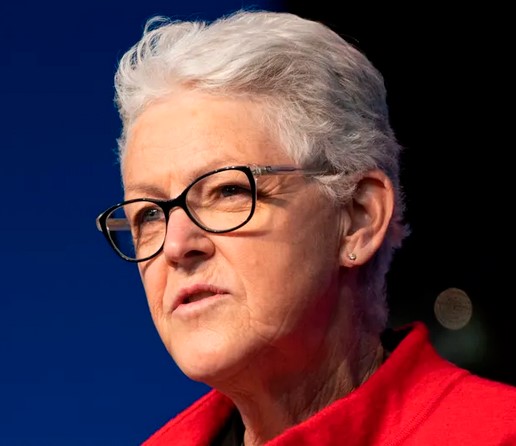 “All tyrannies rule through fraud and force, but once the fraud is exposed they must rely exclusively on force.”

One of Joe Biden’s senior advisors told a reporter this week that social media companies should be cracking down on and censoring anyone who speeds information critical of the administration’s so called ‘green energy transition’.

National climate advisor Gina McCarthy made the comments in an interview with a reporter for Axios, stating “Now it’s not so much denying the problem. What the [fossil fuel] industry is now doing is seeding doubt about the costs associated with [green energy] and whether they work or not.”

She continued, “We need the tech companies to really jump in,” on “disinformation,” noting that criticising a green energy transition upheaval is “equally dangerous to denial,” and adding “we have to move fast.”

The Axios interviewer just nodded in agreement without any pushback.

The Wall Street Journal reported on the comments, noting “Some conservative scholars argue that Big Tech companies could be sued as “state actors” for violating users’ First Amendment speech rights when they censor content at the behest of government officials. Ms. McCarthy is helping make their case.”

As we highlighted recently, Joe Biden has admitted, using rhetoric identical to Davos ‘great reset’ elites, that unaffordable gas prices in the U.S. are part of a deliberate “transition” to green energy.

“Real Inflation for the Vast Majority of Americans is Far Higher” Than What’s Being Reported: Steve Cortes Breaks Down Massive 25% Increase in “Necessities” Like Gas, Food and Utilities (VIDEO)

President Joe Biden is using COVID to engineer a systematic destruction of America’s military and national security through a purging of the most experienced and well-trained personnel and replacing them with “woke” indoctrinated extreme leftists who place ideology before God, Corps, Duty, Honor, and Country, according to former generals, high ranking officers, military rights attorneys, military and civilian physicians, and America’s leading health watchdog, Truth for Health Foundation.

Weblink for the full article and video:

Once it sinks in that we've never been told the truth how 3,000+ Americans were slaughtered on 9/11, today's Twilight Zone conditions should not be a surprise

The "narrative" that two planes knocked down THREE skyscrapers, including one that was not even hit, is a fairytale - a big lie so spectacular that it became accepted. Most Americans don't even know that a third building came down. A 47 story steel skyscraper to be exact. The media worked in lockstep to keep this third building collapse from the American people. The media are controlled and have been for some time.

Weblink to video which changes everyone's mind about what happened on 9/11:

Mike Lindell: ‘Bill Barr Is A Disgrace For America’
https://rumble.com/v18fv1r-mike-lindell-bill-barr-is-a-disgrace-for...

Obamas Gas Up (So much for the war on fossil fuels)

This Biden advisor should be dismissed, because she is shamelessly un-American.

She wants to suppress FREE SPEECH, a basic human right  enshrined/reiterated in the US Constitution

The deranged EU bureaucrats in Brussels had been drinking the UN KOOL-AID, and were eagerly dancing to the UN climate tunes, and telling member countries not to sign long-term gas supply contracts with Russia, because it looked bad regarding fighting global warming.
https://www.windtaskforce.org/profiles/blogs/the-plot-is-thickening...

I AM NOT MAKING THIS UP; JUST GOOGLE.

As a result, EU members had to buy gas on the SPOT market, which went through the roof, because Russia supplies gas only to customers with long term contracts, AS DO ALL OTHER GAS SELLERS.

Normally, the SPOT market is just a very small fraction of the total gas market, but now, IN EUROPE, it had become the 800-lb gorilla in the room.

The EU bureaucrats were PISSED at Russia, because they had thought Russia would supply gas to the SPOT market, which it did not.

The EU bureaucrat scheme fell apart, much scrambling to shift the blame, egg-on-faces every where.

IDEOLOGY-DRIVEN EU bureaucrats had shot themselves in the foot, AGAIN

All that happened in 2021, well before Ukraine, with EU gas storage levels at record lows, and WIND AND SOLAR HAVING UNDERPERFORMED FOR MONTHS.
https://www.windtaskforce.org/profiles/blogs/battery-system-capital...

THE LEVEL OF EU STUPIDITY AND LACK OF REAL-WORLD INSIGHT, AND WIND/SOLAR HUBRIS, ETC., WAS ASTOUNDING TO RATIONAL OBSERVERs

The UN nutcases, and EU bureaucrats, and other Climate Posses are holding hands and dancing in a circle of deranged, positive-feedback madness.

Thought Police.  Ministry of Truth. My way or the highway.

Ever heard of the 1st amendment, Gina?  Can't handle the truth, Gina. Resign your post, Gina