This is another example of how the pro-wind side has inserted itself in key places such as "environmental groups". Yesterday we saw how 50% of the Maine Trust for Public Lands is comprised of current or former First Wind/SunEdison employees including a senator's son. Here we see how one of former Governor Baldacci's chief wind power pushers is Deputy Director of the Forest Society of Maine.

Following are some excerpts on an article on wind power done by the Maine Center for Public Interest Reporting about the creation of the state's expedited wind law:

That momentum may have papered over some significant differences among task force members that are now becoming more obvious. As they neared completion of their report on wind power development in December, 2007, Baldacci made the unusual move of sending his senior policy advisor Karin Tilberg to press task force members to issue a unanimous set of recommendations.

They did as Baldacci asked, and that unanimity, from a group whose members represented prominent environmental groups as well as wind power developers, set the stage for the bill’s unanimous passage through a legislative committee.

Once the committee passed the wind energy bill on to the full House and Senate, lawmakers there didn’t even debate it. They passed it unanimously and with no discussion. House Majority Leader Hannah Pingree, a Democrat from North Haven, says legislators probably didn’t know how many turbines would be constructed in Maine if the law’s goals were met – the number is likely to be at least 1,000 and perhaps as high as 2,000........Gov. Baldacci remains steadfast in his support of wind power. He and Tilberg refused to grant the Center an interview 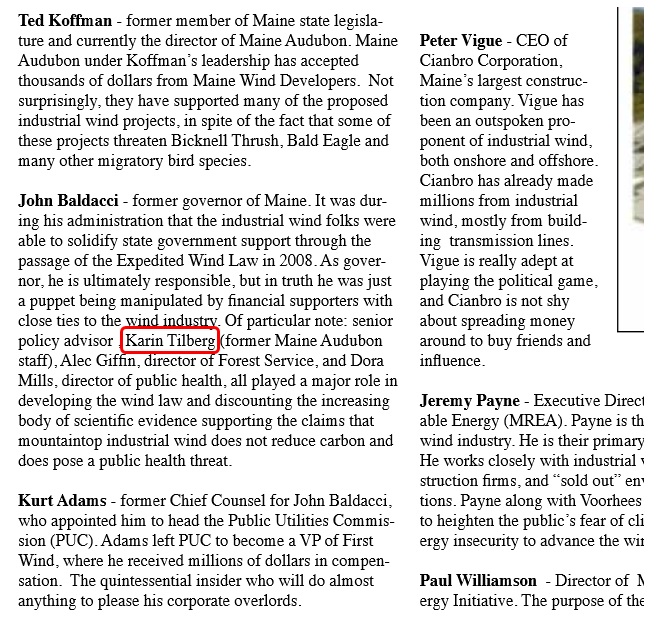 You See This was all PLANNED by the Key members of The Legislature and The Governor(s) Past and Present at the Time ! This Scheme was  very Carefully Planned and the SUCKERS in the Legislature fell for it Hook -Line- and Sinker- Any ways  the Whole Concept was to Sell WIND-Power as it would make MAINE the First in the Nation to Have a WIND POWER GENERATION Law- In other Words they wanted to become  "FAMOUS"  and That was all that Mattered- That's Why there was no discussion !

Any ways Ms. Tilberg is an "INSIDE OPERATIVE"  just Like an CIA Agent ! BECAUSE There is so much Money to be made on Wind-Power -the White Collar Criminals are coming out of the wood-work to feed at the PUBLIC SUBSIDY TROTH !

When the FEDERAL & State SUBSIDY'S Expire the Owners of the WIND POWER INDUSTRY will be Coming to the FEDERAL and State Governments for  the Same SUBSIDY'S  as the Oil Industry has been collecting for the last 50 years !

Karin Tilberg and Baldacci Wind Task Force chairman Alec Giffen are now both on the board of directors of Friends of Baxter State Park. http://www.friendsofbaxter.org/about/bod.php

Karin Tilberg, the governor’s policy adviser, agreed that Maine will benefit from this legislation in a myriad of ways, "So many interests came together working in the taskforce, it was wonderful to work with everyone. It’s a great opportunity for economic development using innovative technologies, while protecting Maine’s quality of place, the environment, and looking out for our communities and businesses," she said.

Karin Tilberg has told members of the MRFC Board that she is not in favor of wind development in the Moosehead region and was not involved with ramming the Expedited Wind Act through the task force. Not sure she's being totally honest with the folks in Greenville.