After 30 months, countless TV appearances, and $80 million spent on an extravagant PR campaign, T. Boone Pickens has finally admitted the obvious: The wind energy business isn't a very good one.


The Dallas-based entrepreneur, who has relentlessly promoted his "Pickens Plan" since July 4, 2008, announced earlier this month that he's abandoning the wind business to focus on natural gas.


Two years ago, natural gas prices were spiking and Mr. Pickens figured they'd stay high. He placed a $2 billion order for wind turbines with General Electric. Shortly afterward, he began selling the Pickens Plan. The United States, he claimed, is "the Saudi Arabia of wind," and wind energy is an essential part of the cure for the curse of imported oil.


Voters and politicians embraced the folksy billionaire's plan. Last year, Senate Majority Leader Harry Reid said he had joined "the Pickens church," and Al Gore said he wished that more business leaders would emulate Mr. Pickens and be willing to "throw themselves into the fight for the future of our country." 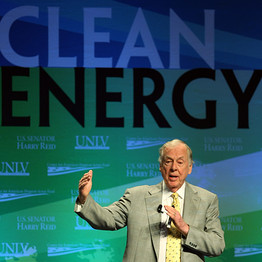 
Alas, market forces ruined the Pickens Plan. Mr. Pickens should have shorted wind. Instead, he went long and now he's stuck holding a slew of turbines he can't use because low natural gas prices have made wind energy uneconomic in the U.S., despite federal subsidies that amount to $6.44 for every 1 million British thermal units (BTUs) produced by wind turbines. As the former corporate raider explained a few days ago, growth in the wind energy industry "just isn't gonna happen" if natural gas prices remain depressed.


In 2008, shortly after he launched his plan, Mr. Pickens said that for wind energy to be competitive, natural gas prices must be at least $9 per million BTUs. In March of this year, he was still hawking wind energy, but he'd lowered his price threshold, saying "The place where it works best is with natural gas at $7."


That may be true. But on the spot market natural gas now sells for about $4 per million BTUs. In other words, the free-market price for natural gas is about two-thirds of the subsidy given to wind. Yet wind energy still isn't competitive in the open market.


Despite wind's lousy economics, the lame duck Congress recently passed a one-year extension of the investment tax credit for renewable energy projects. That might save a few "green" jobs.


But at the same time that Congress was voting to continue the wind subsidies, Texas Comptroller Susan Combs reported that property tax breaks for wind projects in the Lone Star State cost nearly $1.6 million per job. That green job ripoff is happening in Texas, America's biggest natural gas producer.


Today's low natural gas prices are a direct result of the drilling industry's newfound ability to unlock methane from shale beds. These lower prices are great for consumers but terrible for the wind business. Through the first three quarters of 2010, only 1,600 megawatts of new wind capacity were installed in the U.S., a decline of 72% when compared to the same period in 2009, and the smallest number since 2006. Some wind industry analysts are predicting that new wind generation installations will fall again, by as much as 50%, in 2011.


There's more bad news on the horizon for Mr. Pickens and others who have placed big bets on wind: Low natural gas prices may persist for years. Last month, the International Energy Agency's chief economist, Fatih Birol, said that the world is oversupplied with gas and that "the gas glut will be with us 10 more years." The market for natural-gas futures is predicting that gas prices will stay below $6 until 2017.


So what is Mr. Pickens planning to do with all the wind turbines he ordered? He's hoping to foist them on ratepayers in Canada, because that country has mandates that require consumers to buy more expensive renewable electricity.


How do you say boonedoggle in French?

Mr. Bryce is a senior fellow at the Manhattan Institute. His latest book is "Power Hungry: The Myths of 'Green' Energy and the Real Fuels of the Future" (PublicAffairs, 2010).