While the entirety of North America currently undergoing a cold spell that would make Boston’s hockey fans think twice before heading out, the left is still talking about global warming.

Well, technically, they’re calling it climate change now because the rest of the waking world came to understand that there’s no way the world is actually warming.  Their hope is to hold onto the liberal eco-guilt demographic through the certainly chilly 2020 presidential election.

In order to push this bizarre concept on the rest of the world, the left led a three-pronged attack by employing guilt, politics, and the cult of celebrity.  They needed to deftly combine all three of these in order to stifle the science that almost unanimously declares them quacks.  In fact, due to sun cycles, there is a good chance that we’re headed for a new, mini ice age thanks to the Maunder Minimum.

Now, a new corroboration of science giants is once again bringing proposing the idea that our planet is getting cooler, albeit for entirely different reasons.

“As our sun gets older, it’s losing mass, and so its gravitational pull becomes weaker. As a result, the orbits of all the planets in our solar system are expanding, not unlike ‘the waistband of a couch potato in midlife,’ according to a new NASA press statement.

“A team of researchers from the Massachusetts Institute of Technology, the University of Maryland and the NASA Goddard Space Flight Center has shown that the aging sun is behaving according to Albert Einstein’s theory of general relativity. The key to testing his theory? The planet Mercury.

“Einstein’s famous theory accounts for the fact that the gravitational fields of huge objects—like the sun—warp the space-time continuum around them, according to Gizmodo. Because Mercury is the planet in our solar system closest to the sun, its orbit is the tightest.

“’We’re addressing long-standing and very important questions both in fundamental physics and solar science by using a planetary-science approach,’ Goddard geophysicist Erwan Mazarico said in the NASA statement. ‘By coming at these problems from a different perspective, we can gain more confidence in the numbers, and we can learn more about the interplay between the sun and the planets.'”

While there is little doubt that the expansion of the universe happens on a scale of eons, this shrinking of the sun’s mass will send the earth to cooler, further orbit from our sun, thus cooling the planet indefinitely.  And possibly into a mass extinction some millions of years from now, completely negating the idea that this planet will burst into flames because we like to drive fast.

As I’m sure we are all aware, liberally-minded pseudoscientists have virtually conquered the public discussion on so-called “climate change”, despite troves of evidence to the contrary.

To recap the plight of the global warming hoax, we must first look at the American democrats, the radical left, and the globalists, who are all truly just extrapolations of one another to begin with.

The end game of any democrat worth their salt in the party is globalization.  By breaking down the sovereignty of states and nations, the left can add innumerable strength to their misguided cabal from the far reaches of Scandinavia, Russia, and the far east.  Without these voices singing in unison, the American democrats will likely just fade away into oblivion in the very near future…something that the ice caps will not be doing anytime soon, despite the dire and dramatic diatribe of the left.

You see, America is undergoing a massive conservative awakening, and the democrats have turned to their evil overlord George Soros for protection.  What Soros wants in return are political favors that will suit his vast business interests, and, given his extraordinary wealth, can only truly exist on the global scale.  This puts ol’ Georgie in the business of turning wealth into power in the fewest steps possible, leading him on a path to globalism that will consolidate those whose palms need greasing.

One way to achieve this quickly?  Create a truly global threat that only a coalition of nations can solve.  Like, for instance, if the planet was heating up so fast that it doomed us all.

The only problem with their plan, however, is that none of it is true.  Science has thoroughly debunked the global warming hoax hundreds of times over, but, just in case there were still some holdouts in the back of the DNC with their fingers in their ears, here is yet another example of why the entire charade is collapsing.

“A study by the University of California San Diego has claimed that by 2050, the Sun is expected to become cool. You might think ‘what’s the big deal,’ but remember that this means the solar activities that create the heat of the Sun to sustain life on Earth may diminish. And the last time it happened was in the 17th Century, when the Thames River froze. Scientists call this the ‘Maunder Minimum’.

“Physicist Dan Lubin at the university and his team studied the past event and concluded that were are in for a worse case. The Sun is expected to get much dimmer than last time and, in scientific terms, it is a ‘grand minimum’ — a time period in the 11-year solar cycle when the solar activities are at the lowest point.

“According to the study, titled Ultraviolet Flux Decrease Under a Grand Minimum from IUE Short-wavelength Observation of Solar Analogs and published in the journal Astrophysical Journal Letters, this grand minimum will be 7 percent cooler than such periods from the past.

“Scientists also said that the Sun might have another cooling period in a decade.”

Of course, the words “Maunder Minimum” are likely on the first page of whatever neo-Fascist rule book the left is using to censor the debate on climate change.

But, in the words of the great Neil deGrasse Tyson, a staunch climate hoaxer,

“The good thing about science is that it’s true whether or not you believe in it.”

As you can see from the display, the average global temperature has seldom exeeded 77 degrees F. 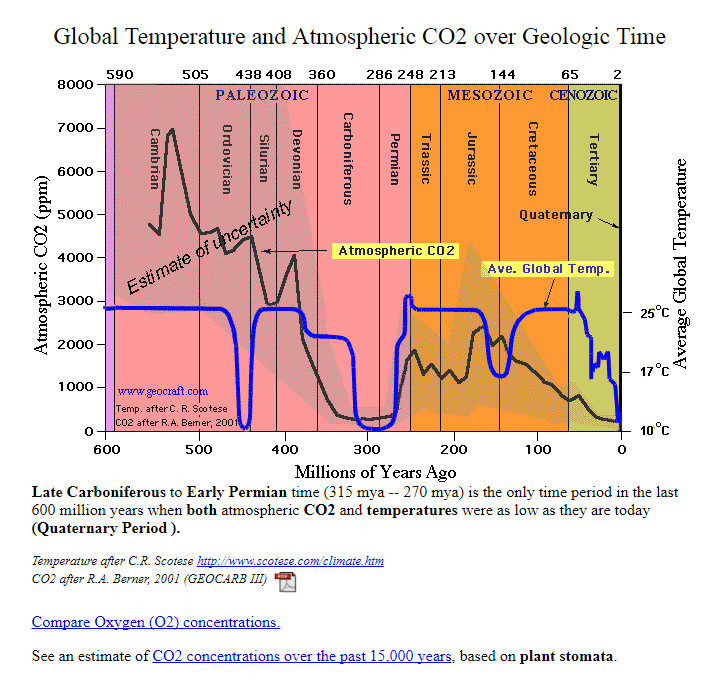 Environmental wackos mix it up with each other

What we are seeing here is a battle between the absolutists who want us living in mud huts with no electricity, smugly virtue-signaling our green correctness, and the already built green empire of political has-beens desperate to preserve their legacy as well as giant corporations who've invested millions in going green, state legislatures and governors that have forced the public to pay for plastic bags at the grocery and suffer through other controls, and all the contractors who signal their virtue by showing how green they are.  All of those groups need natural gas and nuclear energy, given that they operate in the real world and have an empire to defend.

That a fight is breaking out between these two groups is a good sign, a sign that the jig is up, given that the truth of this junk science is finally getting out.  It would be nice to put them all in a gladiator pit and watch them duke it out.  Since that won't happen, let's hail that the truth is getting out about the global warming scam, and the fight breaking out is the result of a tottering empire."