The following is a list of Maine municipalities that have enacted wind ordinances. Please see the source link below where many of the municipality names are clickable and follow these hyperlinks to additional information. Please post comments if you have additional municipalities to add - not just for ordinances but also ordinances under consideration and/or wind power moratoriums. 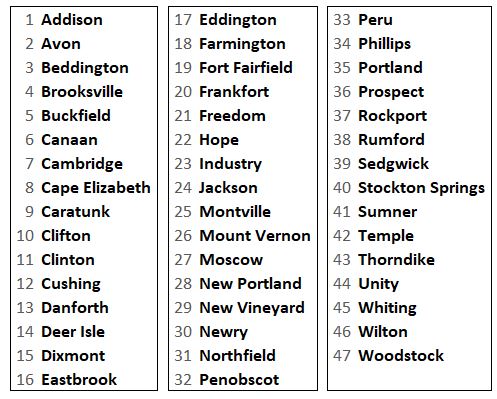 The state's expedited wind law, LD 2283, provides virtually no protection for Maine citizens having been designed by and for the wind industry.

Therefore, the best protection for Maine municipalities is for them to establish protective ordinances governing industrial wind power.

Often, as a first step,  municipalities will enact a moratorium to give themselves the opportunity to study wind power. In the vast majority of cases, whenever industrial wind power is studied as such, the municipality ends up passing a protective wind ordinance. Typically, the wind industry cries and complains about these ordinances because the setbacks, designed to help protect human health, may decrease their flexibility in siting turbines and thus harvesting their subsidies and other taxpayer-supplied goodies.

It is laughable that the wind industry's rigged opinion polls conclude that 80% of Mainers like wind power, for when the REAL POLLS occur, the ones at the ballot box, Mainers overwhelmingly reject wind power, time after time. The wind industry itself has admitted that citizens in possession of the facts are a big problem for them.

Yes, the real opinion polls are not those paid for by the wind industry or their paid shills, but rather the ones where the VOTERS of municipalities decide on wind power after studying it. And they almost invariably reject it.

The state needs to stop letting itself be guided by the rigged industry studies, and based on the not insignificant number of towns who have thus far reported in, put the people's very clear wishes first and undo the heinous expedited wind law. The people have spoken clearly and their message is clear "Provide Protection".

To not do so is in direct defiance of the will of the people as surveyed in real poll after real poll - those at the ballot boxes.

Wind-energy proponents admit they need lots of spin to overwhelm the truly informed.

"The more people know about the wind business, the less they like it."