"BOWLING GREEN — As they labored trying to start a broken down truck near the north end of the Wood County Landfill, Ken Vollmar, superintendent of the facility, and one of his employees felt the bite of the winter chill. Their cold hands had their attention as one of the four wind turbines located at the site spun nearby.

But then they heard a loud thump and turned to witness a large bird tumbling to the frozen ground. What they soon learned was the severed wing of the bird floated in its slower descent and landed about 50 feet away."

This was likely an adult male bald eagle out hunting for active nest located within several miles of this turbine.  If so the eggs or the chicks will die.  A terrible but common wind energy impact, almost never mentioned by the media or this disgusting industry. USFWS agents, will also not followup on the likelihood of the impacted eagle nest or report the truth back to the public.  That's because it is part of their job to conceal the truth about wind energy impacts from the public. Had this eagle not been seen by these witnesses it would have been found shortly because turbines are routinely checked by wind personnel looking for bodies of eagles and other special status species. I know this for a fact because of a secret meeting I had with a Wind Tech. I was told eagles are easy to spot around turbines and at just one wind farm in 2015 five eagles were found around turbines in 1 month.

In looking at this image it is obvious this is a well traveled roadway and now you know why. 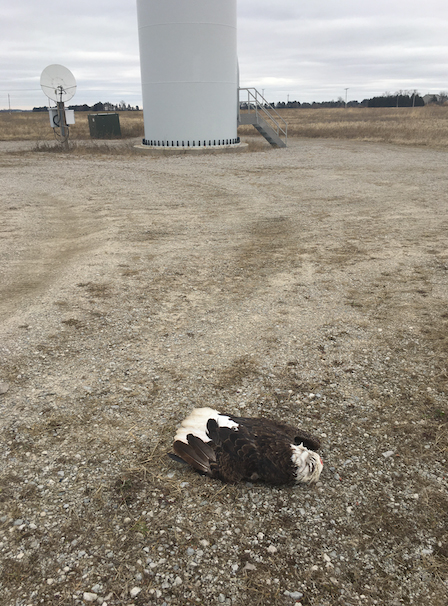 Here is an absurd and fraudulent statement from the article.........."The report he filed on the kill indicated the dead bird was an adult bald eagle, a species safeguarded under the Bald and Golden Eagle Protection Act and the Migratory Bird Treaty Act."

Article forgot to mention all of this......Wind turbines are the biggest killer of bald eagles in this country and this industry has gotten a free pass for their slaughter for decades.  Also thanks to our corrupt Interior Department and a criminally fraudulent wind industry, since 2016, turbines can kill up 4200 bald eagles a year in the US.  But the truth is they could really kill ten thousand a year and just keep hiding bodies like they've done for decades.  All done with the help of complicit USFWS agents that ship the carcasses off to the Denver Repository.

Theses two entities do their best to conceal every incident so this Enron based industry can keep on building these monsters and keep soaking taxpayers.

This fraud has been going on this the public since at least July 5 1989, when the first bald eagle turbine mortality was reported then covered up.

Anybody with an IQ over 80 can Identify an immature Bald Eagle from a golden eagle. In 1989 when a Bald eagle was still an endangered species, word of this fatality got out. This cover story was put out to to create doubt and nothing was ever written again. Images were never shown to the public. In 2016, while the wind industry was trying to get permission to kill thousands of bald eagles each year, the AWEA busy was proclaiming all the "standardized" green lies to the public about turbines killing few eagles. The link I have to to this fraud filled web page was taken down long ago and is no longer valid. 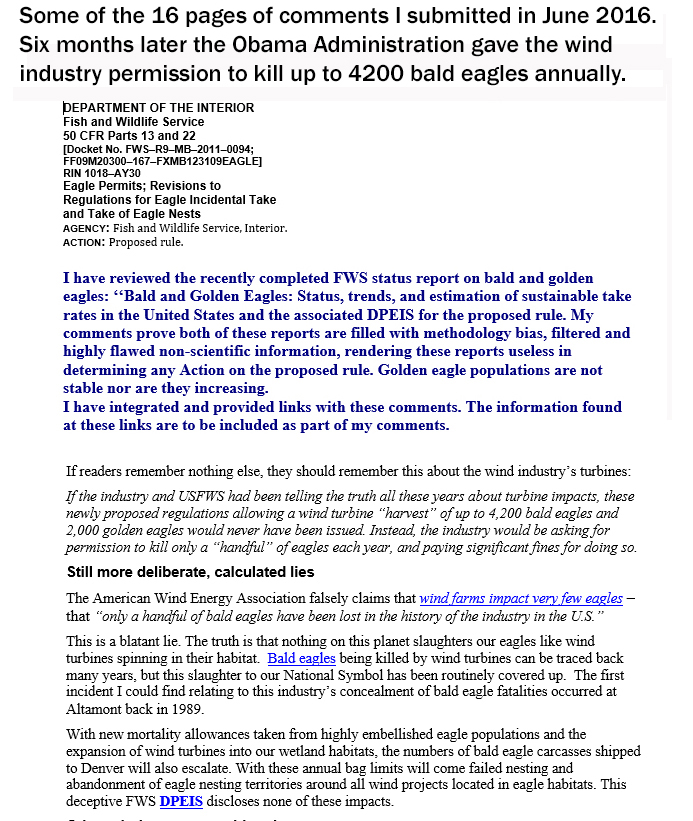 ..............."I have repeatedly tried to get the AVIAN Kill report from both the MAINE Audubon Society and the Natural resources Council of MAINE over the last 10 years and there has NOT Been one word of response from either"............... Even if you did get an answer, it would be one big ass lie.

The "Green Power" coalition has its own "Deep State" with multi-pronged approach including "follow the money" (if you can)...also look at who is employed by who....and the conspiracy of global "climate change" to control people and power.  But a major factor is some of the investment groups and individual investors who have a lot of influence, which is part of "follow the money"...but carefully hidden.

I have repeatedly tried to get the  AVIAN Kill report from both the MAINE  Audubon Society and the Natural resources Council of MAINE over the last 10 years and there has NOT Been one word of response from either.

I do know that most of the WIND TURBINES  in MAINE are completely Enclosed by  FENCES that go around the entire developed site with a locked gate for entrance only by authorized personnel.! Why is this? Why is the WINDPOWER INDUSTRY  allowed to kill so many Birds??

Stop the PTC corrupt spending of our tax money is a good start...however as long as the liberal control our state government and democrats control spending and "green new deal" budget line items in any stimulus programs, stopping the"madmen" will be tough.  Follow the money.

We must also keep energy costs down to make green stuff less competitive. Problem there is the PTC and other incentives will be increased to make up the difference.

There is a lot of wall street giants and foreign money invested in wind and solar projects.  Templeton fund is one major example.  Lobbying for PTC, etc...is huge.

How can the decent people of the world avoid the march of these Madmen on their way to hell?

You have not seen anything yet....there will be many hundreds of additional turbines in Maine in the next few years....and YES, Maine people knew about the huge number....Then Governor Baldacci, legislators, NRCM, ME PUC staff and others were informed.

Huge numbers will be built in the Northern Aroostook County farming area....the Blueberry barrens, the Western Mts. (waiting for hydro-quebec corridor) PLUS offshore projects....the turbines will all be bigger (like the ones being built near the Great Heath.

The PTC is key to timing...as well as energy costs...but investors are lined up to take advantage of the taxpayer incentives.   Other low interest investments make the PTC investments more attractive.

That free pass to kill eagles was given by Obama, who is a Democrat wind lover, and who spent billions to build solar thermal plant in the US southwest, some of them went bankrupt, with debts guaranteed by the federal government and some are performing at 50% of design production