I came across this and I believe it really is important for critics of wind power in Maine to start monitoring what takes place at the existing wind sites as they start aging through the freezing and thawing and icing of Maine winters.  I always believed that if GE or Siemens said the useful life of a wind turbine is 20 years, that would be reduced to 10 to 15 years in Maine's harsh northern climate.  More down time for repairs should be a frequent criticism if we pay attention!…

This is a thought provoking essay from an Australian website called "Andy's Rant".

http://www.andysrant.com/ ; His carbon focus is mostly on the base but frequently the question has come up about what goes into the base and the fact that manufacturing cement is a heavy carbon emitting process.  I thank him for that analysis alone.  He also states what I have been saying all along in this battle to educate the public about the false…

Keep Out the Wind Developers!

Congratulations to the small town of Alexandria, New Hampshire for the large turn out of protesters forcing town officials to turn away wind developer EDP.  This is how it is done, folks!!! 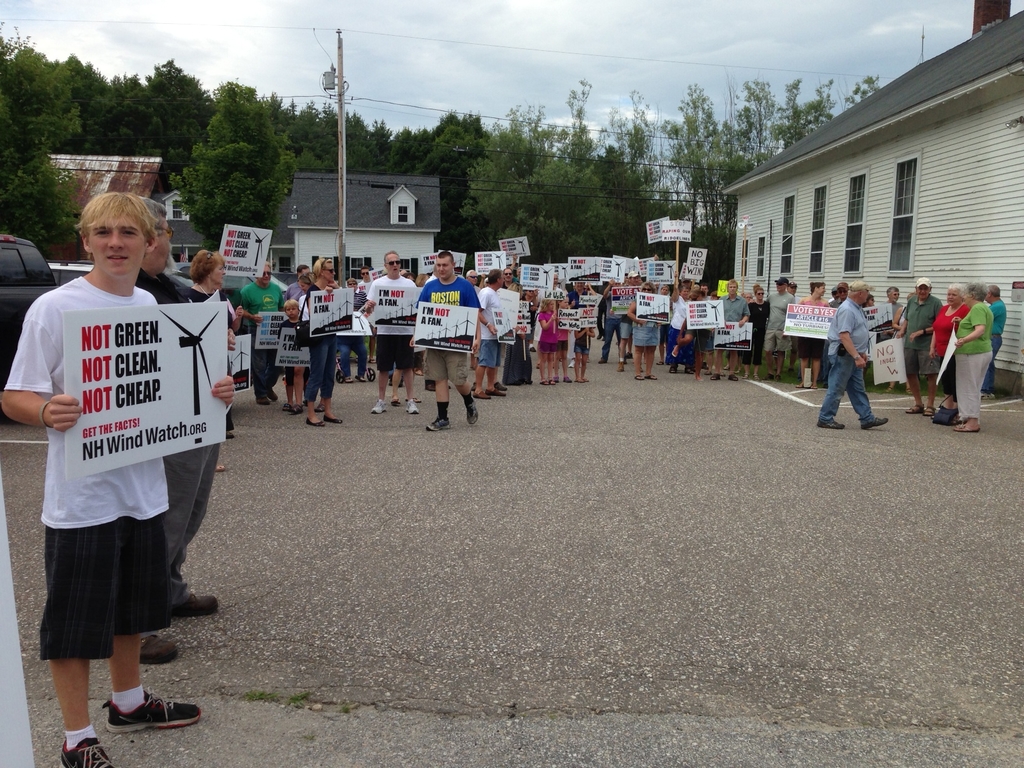 Alexandria residents got involved right at the beginning stage, having Town…

Some intrepid opponents of Oakfield Wind have supplied me with the first photo documentation of the destruction taking place.  Click here to go to the photo album http://www.windtaskforce.org/photo/albums/oakfield-wind-destruction-july-6-2014

Here are a couple of the photos:…

This is Amazing! I watched WGME (channel 13 in Portland) 11 pm news on July 5th. Right after sports , on came an editorial. WGME is one of the Sinclair Broadcast Group stations that airs "Behind the Headlines with Mark Hyman". It was a blistering condemnation of the climate change scam. They chose to send this excellent critique out to its southern Maine audience.… On Tuesday, June 24, Saving Maine not only ran the two ads in the National section of the Portland Press Herald, but also ran this ad in the "Business Tuesday" section.  We who understand the wind scam know it is the bastard son of Enron.  Thank you Saving Maine for pointing it out so well to the southern Maine business community.  Expensive, taxpayer subsidized wind power should NEVER be supported by the business community unless that business has its hand in the wind industry "cookie…

Saving Maine's ad campaign has expanded to the Portland Press Herald, with two ads on different pages in the National section.  The ads which started today are this one here and, two pages later, the "Saudi Arabia of Wind" ad that I posted a few days ago that had run in the "Forecaster". 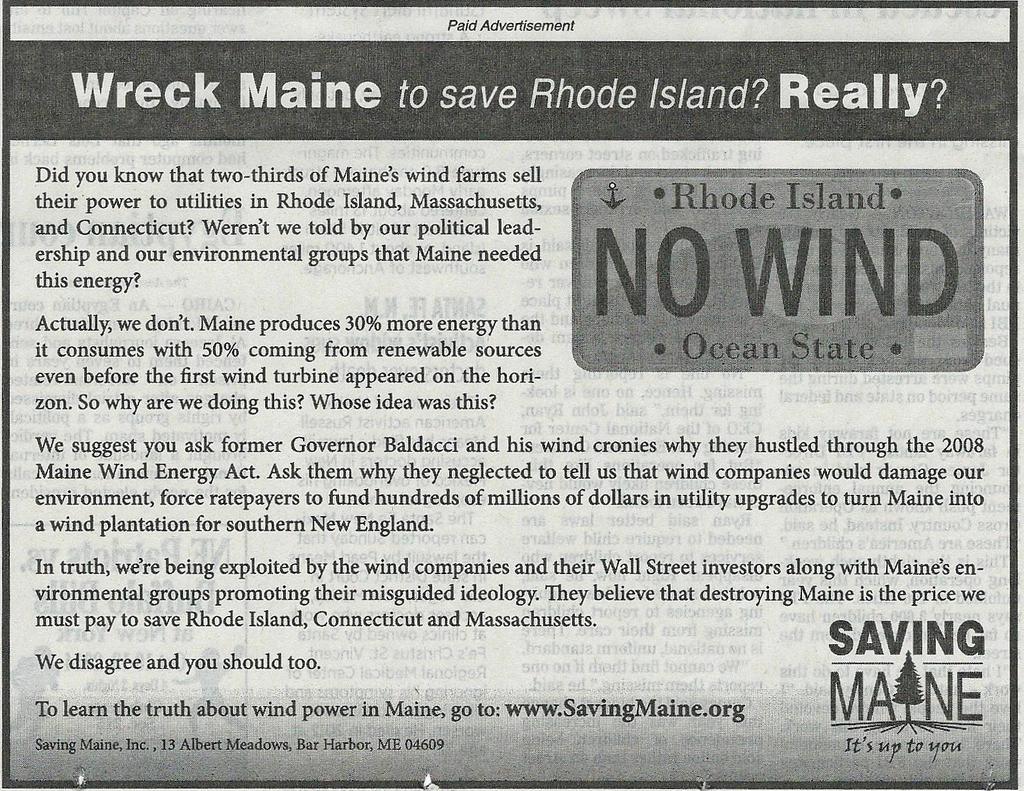 The significance of this ad campaign cannot be understated.  CTFWP, in…

Thank you Saving Maine for raising the funds to launch an advertising campaign to educate Maine citizens and our valuable summer visitors about the scourge of industrial wind power in Maine!

The new ad campaign by Saving Maine is on! Here is the ad that ran in this week's Forescaster, the premier newspaper that covers Maine's populated region that loves wind turbines because they will never have them built near them. Support the effort by going to savingmaine.org…

A Wind Noise Victims Speaks Out

This is dedicated to all the wind turbine victims in Maine and everywhere else.

This is from VTDigger.org.  The author is a victim of the Georgia Mt. wind turbines in VT.   I have copied the entire piece here, but there are many interesting comments as well, so here is the link:  …

Wind Power Tax Credit ‘Dead’ in Congress This Year, according to Bloomberg.com

Don't ever count out the greedy push of the wind developers but according to this Bloomberg.com post, the revival of the wind industry's sacred Production Tax Credit may be dead this year.

Here is the lead in to the article, followed by the link:

The European Wind Folly should be a lesson for the USA

In the fight against proliferation of destructive, sprawling wind power sites, the scenic and environmental impact and noise problems are important. But I usually lead with the economic argument. Wind Turbines are a useless, expensive source of electricity that would not even exist except for overly generous subsidies (per MWH) and heinous mandates. Before we destroy more of our beautiful state with wind turbines, Congress should take heed of the disastrous results of Europe's folly with…

Bull Hill Turbines from Schoodic Mt. A ruined vista from a scenic resource

One of the most troublesome problems with the proliferation of industrial wind projects in Maine is their encroachment on the "treasures" of the state that we have purchased to protect for future generations.  We have passed a number of bond issues totaling more than $200 million (principal & interest) for the Fund for Land for Maine's Future.  We have leveraged with these funds millions of dollars more from other sources to preserve places like the Mahoosuc Range, Rumford…

This photo was taken from a clearcut on one of the ridges where First Wind proposes a huge wind project in Molunkus, Medway, and T1 R5.  It will include the largest turbines yet used in Maine, the Vestas V117 3.3MW that is more than 500 ft tall from base to blade apex.  This site is about 15 air miles from the boundary of Baxter State Park and less than 5 miles from high value Salmon Stream Pond and Molunkus Lake.  Below the photo is my testimony to the EUT Committee.…

I wrote this and posted it in response to a letter to the editor from a known wind power shill:

I was at the Maine Audubon meeting where this sham study was presented and I have read it.  It is so poorly researched that it never should have been published.  Other than saying, in order to appease the AMC, that elevations above 2700 feet are not good sites for wind power development, the reports essentially sacrifices the entire rest of the the great state of Maine's  "expedited wind…

Mr. Lutz had difficulty posting, so asked that we post this heart-felt letter to Maine Audubon for him.

Dear Friends;
I have long been a supporter of the Audubon Society, admiring your policies on saving our environment and our birds.  I have a camp on a Maine lake that only recently (in the last 15 years) has had several pairs of our most beautiful National Icon, The Bald…
Continue

We have recently been bombarded by supporters of wind power saying that the cost of wind generated electricity is at or near parity with conventional generation.  As usual, the zealots have found ways to twist information and conveniently ignore information in the perpetually desperate scheme to push acceptance of wind power.  Willem Post is a brilliant analyst with great credentials.  His conclusion: the total levelized cost* of wind energy averages $151/MWh…

Dr. Michael Nissenbaum of Maine has continued to publish his findings an analysis of the impacts of industrial wind turbines on people.  His latest publication is in New England College of Occupational and Environmental Medicine - Michael A. Nissenbaum, MD - November 5, 2013.