Offshore wind energy extraction: Bigger turbines than ever as industry poised to spread into Gulf of Maine.

At the Offshore Wind  event at the Maine Fishermen's Forum, the industry supporters note that a push  is on to start setting up windfarms in the Gulf of Maine. 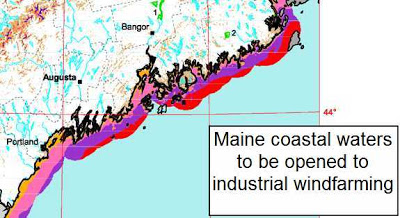 It is time for some pushback!  Want to help?  Let's discuss defense of Wild Atlantis.  Below, some backstory on scientists trying to figure out the effects to the water's very currents - and the marine life that use them.

A decade ago I asked a Norwegian  scientist what impacts to expect to the Gulf of Maine's  marine hydrology and ecosystem if ocean windmills are operated  there.

Gøran Brostrøm is author of a pioneering  work on the impact of ocean wind energy extraction on the  structure and  dynamics of the waters passing into and through the "wind shadows"  directly behind  each turbine.  That work is On the influence of large wind farms on the upper ocean circulation...

Excerpts:" Large wind farms exert a significant disturbance on the wind speed in the vicinity of the installation ... We find that the size of the wind wake is an important factor for the oceanic response to the wind farm....The generated upwelling is sufficiently enough that the local ecosystem will most likely be strongly influenced by the  presence of a wind farm."

Brostrom is an  atmospheric scientist and notes his study is very preliminary and largely model based. That the topic had received very little study by atmospheric and oceanographic scientists to date (2008).

Dr Brostrom responded to my  aforementioned 2010 inquiry.. He wrote:

" I do think large wind farms can potentially have a relatively large impact on the local oceanographic conditions. I say potentially because it has not yet been proven yet. Thing that should be investigated may be:

"1. Will the wind farms increase the upwelling in the area? If so, how will the nutrient levels and primary production be affected by the increased nutrient levels? Will the risks for toxic algae blooms increase?

" 2. Will the induced changes in wind stresses (or more specifically, the large increase in wind stress curl) give rise to a changing current system in the area? Will this affect local transport mechanism for e.g., plankton, larvae and sediment.

" Will the new current pattern influence wave climate in nearby areas and the nearby coast. What is the extent of the induced current system (if barotropic motions are excited there is a possible remote affect from the wind farms).

3. It should be noted that different wind farms may act in concert such that you cannot investigate the impact of each wind farm seperately, it could be that the most important aspect is the total area covered by wind farms."

He went on to write

" For your  question concerning Lobster larvaes I think that the transport of these may change. However, without really knowing I would say that the wind farms will not affect Lobster production in a negative way. The possibility of increased primary production will probably take out any negative impacts on larvae transport but I really do not know. "

Replies to This Discussion