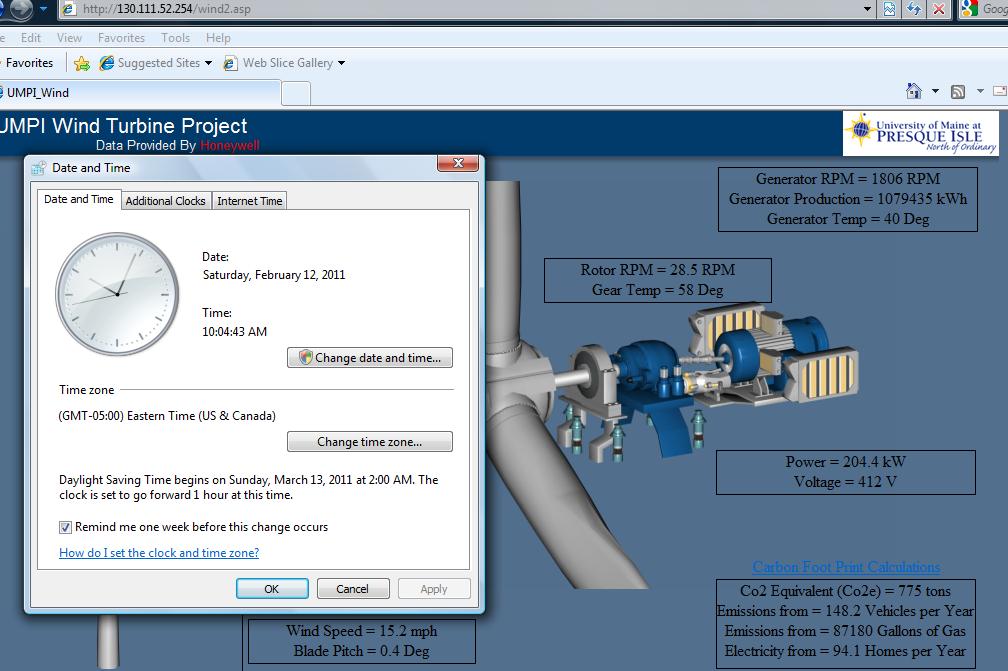 The following is excerpted from Downeast Magazine at http://www.downeast.com/magazine/2011/march/education-green-living

"And then there’s the three-hundred-foot-tall, six hundred-kilowatt wind turbine that looms over the athletic fields at the University of Maine at Presque Isle (UMPI) campus, its blades spinning in the steady Aroostook winds — a powerful symbol of the university’s commitment to renewable energy, which saved more than a hundred thousand dollars in energy costs during its first year of operation and earned UMPI a national award for institutional excellence in climate leadership.

UMPI President Donald Zillman, a legal scholar who specializes in energy, environmental, and natural resources law, likes the winds he sees blowing through Maine higher education. In all, fifteen Maine colleges have signed the American College & University Presidents’ Climate Commitment, a series of sustainability benchmarks that includes setting a target date for achieving campus climate neutrality. “In the crucial areas of sustainability, promotion of renewable energy, and control of carbon fuel consumption,” says Zillman, “our actions reflect our state motto — Dirigo [I lead].”

Then again, Zillman likes the winds blowing through Presque Isle, where bad weather is now good news. He recalls watching a couple of soccer matches during a “terribly, wonderfully windy” weekend last fall: “The poor players were freezing and they couldn’t control the ball. But I was thinking, ‘Boy, we’ve got twenty-five miles per hour winds — we’re making power hand over fist!’ ”

Well, Dirigo does in fact translate to "I lead". But it all depends on where. Unfortunately, self-serving green dogma originating from special interests has permeated the classroom in a carefully choreographed form that could well translate to "I lead - right off a cliff".

What we need are courses steeped in pragmatic reality, not dogooder dogma distributing feckless fairy dust.

On the other hand, the University of Maine's $2 million (and counting) experiment with wind power represents an opportunity. An opportunity to show us the electricity production data that the wind companies refuse to provide or otherwise conceal from public view.

Because the electricity data undermine all the myths the wind developers spread as they con Mainers into allowing their false panacea to deface Maine's countryside, torment Mainers and ordain a future of sky high electricity costs and higher taxes.

It's really wrong they can hide behind the words "proprietary" and "confidential" because it is our tax money they rely upon. Without it, they'd be out of business. And the subsidies wind electricity get are huge - 90 times as large as natural gas on a per MW basis and 3.5 times as large as natural gas and oil combined on an absolute basis. See Table 35 at http://www.eia.doe.gov/oiaf/servicerpt/subsidy2/pdf/chap5.pdf

So when the only state experiment to date, the UMPI wind turbine, shows after near two years of operation that it produces at only 11.7% of capacity, we have made some very significant progress in casting sunlight upon the inability of the wind industry to produce viable amounts of electricity despite massive impacts to people, places and pocketbooks.

The wind industry is furious that the University of Maine makes public these data and has organized an effort to say that their turbines are far more efficient. Not true. They are just a few small percentage points more efficient.

And it is far, far worse than the paltry 11.7% because by the time the wind blows and is available to the grid, more than adequate power has already been purchased in the day ahead electricity market to meet forecasted demand. So wind is always unneeded for all practical purposes. It is unreliable so it is not bought ahead of time, but rather something we are required to buy because of laws thrust upon our struggling state and nation due to wind industry lobbying. (In fact, the company that accomplished this was ENRON.) So when we are forced to buy it, it is always an expenditure for something we don't need. And that assures that it is always a total waste of ratepayer money. Because wind fluctuates by the minute. The gridkeeper basically ignores it. On occasion, when the gridkeeper attempts to mirror wind's fluctuations by powering natural gas up and down, the natural gas combustion becomes grossly inefficient not dissimilar to a car in stop and go traffic. The result is more CO2 is produced than if wind had never been introduced into the equation.

The CO2 that the wind industry uses to push their agenda is hurled at us in scary "tons". That's a lot for something like air! But if one uses a practical common sense benchmark such as the carbon sequestration of the Maine woods for perspective, one sees that wind is all impact and no benefit. I urge you to read and carefully study the following pdf.

To say wind is expensive is thus a huge understatement.

The next logical step is for the University of Maine to take these results, and compare them on a cost basis to other electricity sources and render a clinical analysis of the efficacy of our electricity options. I am looking forward to such an analysis. Here is the Focus the Nation map showing Maine gets 12% of its electricity from oil, when the real number is under 2%. Will Angus King try and perpetuate this with the trusting students or will be simply stick with the fabrication that Maine is the Saudi Arabia of Wind, something that has been told to 14 other states. (Maine ranks # 19 in wind resource).

"Focus the Nation, which is dedicated to climate change awareness, youth empowerment and the acceleration of a transition to a clean energy economy, selected NMCC as host for a clean energy forum in Maine and has engaged a team of students to coordinate the conference. The forum will be one of 22 held around the country and the only one in the Northeast.

She said Thursday that she believes the event will open up a dialogue both on campus and in the surrounding communities about clean energy. She said participants would identify ways to spread the development of clean energy and examine any barriers that may be in place to such development."

But what if some of those barriers are the laws of physics? It would be nice to see some unbiased physicists weigh in on energy density, or the lack thereof in wind.

I googled the above organization, Focus The Nation, and one of the first things I noticed is that one of their "resources" they link under "Clean Energy"  is the American Wind Energy Association.

One wonders who funds this organization targeting our youth.

On their site they have a map and if you click on Maine, you will see that they are stating that Maine gets 12% of its electricity from oil, when in fact the number is under 2%.