One primary reasons is because they have chosen to be silent about the biggest environmental disaster to ever hit bird species, wind energy. They have also completely avoided scientific research, even though they could afford to conduct their own credible research ten thousand times over. Instead they have chosen to endorse this industry, not question all the contrived and completely fraudulent impact research, and reap in funding from wind farms.

Audubon supports and says nothing about an industry concealing millions upon millions of bird fatalities annually. An industry that is the leading killer of eagles and most likely the runaway killer of endangered species in this country.

Wind farms, destroy ecosystem biodiversity like no other industry and the wind industry's turbines are destined be a final blow to dozens of avian species. Yet Audubon endorses, participates with and promotes this incredibly destructive industry.

Things are so backward and so wrong with Audubon, that it's like the American Lung Association promoting the tobacco industry for good heath. Then spending none of their money on their own scientific research and allowing Tobacco interests to lord over all studies so vaping and cigarettes always appear to be good for one's health.

That's pretty much why the thoughts of total disgust and corruption towards Audubon. They really aren't working for the birds, they're working for a corrupt industry. 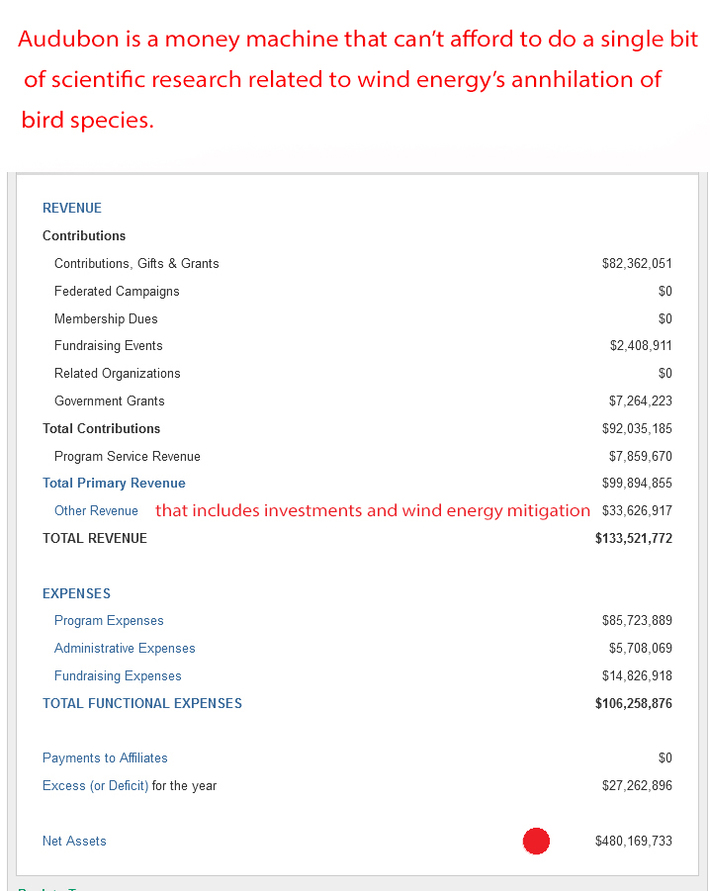 Their fundraising efforts right now seem to be completely focused on climate change with an emphasis on the loss of nearly half of all our birds in short order if we don't stop planet from warming.  Like the polar bear on the melting iceberg, they're using species extinction due to climate change to garner donations.  Nothing about habitat loss in their jingle.  Just the need for more renewable energy, ie solar and wind.

I don't know the components of their $85.7 million Program Expenses. I do know that the study that MAINE AUDUBON released six years ago was heavily criticized: