Please note the emphasis in bold green is mine.

Having trouble viewing this email? View it as a Web page.

The following is the weekly message from Governor Paul R. LePage. To listen to the audio visit the Governor's website.

Hello. This is Governor Paul LePage.

My fellow Mainers, I do not like being the bearer of disturbing news. But someone has to have the courage to tell the truth. Mainers are paying considerably more than you should for electricity.

Maine’s energy costs are 10th highest in the nation, and our electric bills are 34 percent higher than the national average. But it does not have to be this way. Affordable energy is available right here in Maine and just across our northern border.

I traveled recently to Canada to meet with officials from Hydro Quebec, which has plenty of hydro power to sell at very affordable prices. They told me that selling power to Maine is not worth it. And it’s all because Maine has a limit on how much renewable energy we can use, including hydropower.

Under Governors King and Baldacci, legislators enacted RPS — the Renewable Portfolio Standard — which restricts us to using only 100 megawatts of hydropower. Hydro Quebec has 41,000 megawatts of energy to sell, but they sell it in 1,000 megawatts increments. They wouldn’t even consider selling as little as 100 megawatts.

Here in Maine, we have over 700 megawatts of installed capacity for hydropower. It is clean, it is renewable and it is affordable. So why would we limit hydropower? The answer is simple: Wind.

The RPS law limits the amount of energy we can use from renewable sources, such as hydropower, solar, tidal, biomass and geothermal. But in 2009 legislators lifted the cap for wind power, which is expensive to build and produces a minimal amount of our electricity.

In 2011, we got only 4.5 percent of our electricity from wind. While it produces only a fraction of energy, it is some of the most expensive electricity we buy.

This arbitrary cap gives wind an unfair advantage. It prevents us from using more affordable forms of renewable energy, and it drives up the cost of your electricity. Yes, my fellow Mainers, you are paying higher rates for electricity to subsidize wind power. That is wrong.

Too many companies have told me that Maine’s high energy costs prevent them from doing business here. For example, I made a generous offer to attract a world-class company to come to the former Brunswick Naval Air Station. The company told me it would not come to Maine for two reasons: we are not a right-to-work state, and our energy costs are too high.

In another example, one of Maine’s major paper companies shut down for 30 days because it costs less for them to close for a month than to pay their high electricity costs. Good employees are paying the price for these irrational energy laws.

These high energy costs are robbing you every month. They are killing jobs, forcing layoffs and discouraging major companies from even looking to Maine.

Folks, it doesn’t have to be this way. That’s why I have introduced a bill to remove the 100-megawatt limit on renewable sources of energy, including hydropower.

I agree that we should explore all of our energy options, including solar, tidal, biomass and geothermal power. But the market should decide which of these options should succeed, not burdensome laws that benefit wealthy owners of wind companies.

So join me in supporting this common-sense bill to get the most cost-effective energy we can provide. Tell your legislators you want affordable electricity, and you want it now.

Comment by Kathy Sherman on March 31, 2013 at 6:11pm
This discussion regarding the diverging policies between the New England states should go into the equation too.
http://m.washingtonpost.com/business/new-england-plan-to-buy-renewa...

Given that Maine is the only New England state that even makes into the top 25 states.for land theoretically available with theoretically commercially viable wind resource (30% capacity predicted at 80 m hub height), maybe the Maine governor and legislature may well want to evaluate the sacrifice of the state's ridgetops for Massachusetts and Connecticut's needs.
Of course Rhode Island and Massachusetts are banking on industrialization of the ocean, but Connecticut does not have the equivalent.

Massachsetts has had the highest prices for Renewable Energy Certificates in the US, paying $45/MWhr when the open market value was $0.65/MWhr. The price for solar RECs is far higher. Massachusetts has been pushing the concept of price stability and bulk purchase capacity by the state for years. What happens when there is a low wind year? What happens when there's no wind during peak summer demand?

This time, ignore a few interest groups and do what will benefit every citizen in Maine. Remove the 100MW cap on hydro-electric. It's a no-brainer.

The building of 459-ft tall industrial wind turbines on ridge lines has nothing to do with quickly grabbing federal and state subsidies while the getting is good to build RE businesses. It is all about CO2 emission reduction to save the world from climate change and global warming. Let us see how much are these reductions.

Note: The Sun's energy intercepted by the Earth is about 12,000 times greater per year than all energy used by man per year. So, who is the 800-lb gorilla?

Here are some extravagant life cycle CO2 emission reduction numbers claimed by GMP and the more likely numbers, based on real-world experience.

The same is true for wind.

In White River Junction, VT, a $10.5 million, 2.2 MW solar facility was put up by some Boston multi-millionaires as a tax-shelter. About 15 acres of trees and other vegetation and topsoil were cleared and the area was leveled with bulldozers, i.e., raped. The whole is surrounded by 8-ft tall fencing. It likely has Chinese panels and German inverters. Vermont may have supplied some of the supports, brackets and miscellaneous bric-a-brac. Few, if any, permanent jobs were created. The multi-millionaires will get paid 30 c/kWh under the SPEED program, currently limited to 127.5 MW, but sure to be expanded to achieve RE goals.

NOTE: The PSB will have to adjust the 30 c/kWh, based on inflation or grid prices, to continue to attract sufficient tax-shelter capital and to make the SPEED program look successful. Current NE grid prices are about 5.5 c/kWh, unchanged for about 4 years. The NE grid price is likely to increase at about the rate of inflation, because of nearby, reliable, abundant, domestic, low-cost, low-CO2-emitting natural gas.

Vermont's current energy consumption is 23% from renewables. The 2011 Comprehensive Energy Plan, CEP, recommends Vermont obtains 90% of total energy (heating, cooling, transportation, energy generation, etc.) from renewables by 2050. Building on the 2.5-years of meager production results of the SPEED program (at end 2012, 0.53% of Vermont’s electricity consumption; average RE energy cost 0.17 c/kWh in 2012 and rising!!!!), the CEP recommends a Renewable Portfolio Standard, RPS, that sets a goal to obtain 75% renewable electricity within 20 years. It appears, Montpelier’s CEP is an RE sector wish list based on fantasizing.

The SPEED program is:

- A major boon for multi-millionaire owners of solar facility installers, China (panels) and Germany (inverters), and the makers of miscellaneous hardware.

- A major bane for already-struggling households and businesses, as it means decades of excessively-increasing electric rates.

- Good for solar system installers, because they are building their fortunes on subsidies, at the expense of everyone else.

- Good for multi-millionaires, because the SPEED program is a license to avoid taxes and print money; i.e., income disparity enhanced by government subsidies.

An irrational, expensive, inequitable, dysfunctional energy policy, cooked up in backroom meetings by naive legislators on energy committees and savvy RE business owners/lobbyists, that will slowly but surely cripple Vermont’s already-fragile economy.

The building of 459-ft tall industrial wind turbines on ridge lines has nothing to do with quickly grabbing federal and state subsidies while the getting is good to build RE businesses. It is all about CO2 emission reduction to save the world from climate change and global warming. Let us see how much are these reductions.

Note: The Sun's energy intercepted by the Earth is about 12,000 times greater per year than all energy used by man per year. So, who is the 800-lb gorilla?

Here are some extravagant life cycle CO2 emission reduction numbers claimed by GMP and the more likely numbers, based on real-world experience.

Legislatures in half the states that require electric utilities to buy renewable energy are considering proposals to roll back those mandates....

...Ohio state Sen. Bill Seitz, a Republican who is leading a review of his state's renewable-energy mandate, said the policy reminded him of "Joseph Stalin's five-year plan." He added that his main interest is "in what delivers the lowest price for electricity in our state. That is what we are trying to figure out."... 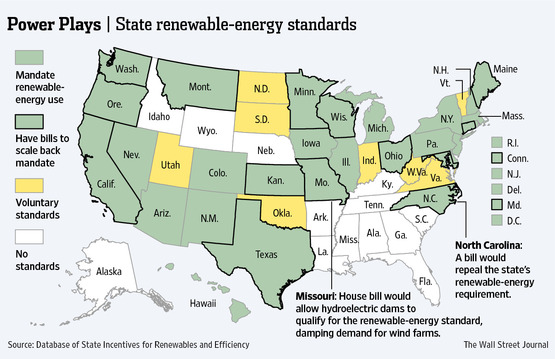