Repository eagles are killed in places where they are likely to be noticed by a person, that being, on roads, under power lines or at a wind farm. The easiest way for a person to notice a dead eagle is it has been killed on a road.  But road kills for eagles are rare. Dead eagles found around power lines are spotted with irregularity and can lie on the ground for months rotting and commonly scavenged upon. Many have these power line eagles been electrocuted, making their condition marginal for recycling to the Native Americans. Whole eagle carcasses found in acceptable condition and suitable for Indian burials, rarely come from power line fatalities.

In the 1970’s the USFWS Eagle Repository, was located in Idaho where they were receiving 50-100 eagles a year, with most of them being golden eagles. Back then, the golden eagle population in the West, was 4-5 times what it is today.

By the 1990’s,  this Eagle Repository was receiving approximately 600-800 carcasses annually with the majority of these eagle carcasses, being shipped from CA.  It was also a time when most of America’s wind turbines, were also installed in CA. Wind farms located in eagle habitat always kill eagles and these wind farms have freezers used for the preservation of eagle carcasses. One of the responsibilities of wind farm personnel when in the field is to scan for carcasses. If an eagle is found, a supervisor is notified. USFWS agents periodically pick up most of these carcasses and have them shipped to the Denver Eagle Repository.

This eagle mortality quote from 2001 made by The Washington Department of Fish and Wildlife is very telling……………“The repository does not record the State of origin of carcasses received (D. Wiist, pers. comm.). If criminal activity is suspected (e.g.,gunshot, pesticide mis-use), carcasses may be sent to the USFWS forensics lab in Ashland, Oregon. Eagle carcasses with unknown cause of death are often sent to the National Wildlife Health Lab, in Madison, WI. A report based on 1,429 carcasses received between 1963 and 1984 indicated that gunshot (23%), trauma (21.1%), poisoning (11.1%), and electrocution (9.1%) were the most prevalent causes of death (National Wildlife Health Laboratory 1985).”

Here is what this quote really is as saying. For decades and from the time wind turbines began slaughtering eagles in CA, the eagle Repository has not released the cause of death for their eagle carcasses. If they had, the repository would have confirmed the devastating eagle mortality being caused by wind turbines,  The Repository also no longer releases information for the cause of death for any of the eagle carcasses they receive because if they did,  death by gunshots, poisoning and electrocutions would not even account for a third of annual intake of eagle carcasses.  Also notice this important number………..The total number of eagle carcasses for the 20 year period (1963 -1984) only averaged 71 a year.

Today the Denver Eagle Repository receives over twice the number of eagle carcasses in one year, than they did during this entire 20 year period.   If the Repository ever produced the causes of death for the eagles they have received since 1997, the most prevalent causes of death would likely show gunshot (8%), trauma (80%), poisoning (4%), electrocution (3%) and other (5%) because Repository eagles are killed in places where they are likely to be noticed by a person.

I have collected the reported Denver Eagle repository records for most years since 1997. These records are from published studies, Federal court cases, USFWS  publications, and a Senate Report. It is important to notice the how America’s eagle carcass numbers and orders filled for Native Americans,  has escalated right along with the development of wind energy outside CA.

1999 -  Orders for whole eagle carcasses and eagle parts totaled 1260. Of the requests filled, 788 were bald eagles and and 472 golden eagles

2000- the national Eagle repository sent the largest number of whole eagles to Native Americans since it first started operating. Items distributed included 1063 whole eagles and 425 eagle parts or loose feathers. The repository also received 149 eagle parts with 122 coming from bald eagles and 27 from golden eagles. The average order of loose feathers order increased from 15 to 21 per month.

2003 - The National Eagle Repository filled 1,699 orders from Native Americans for eagles and eagle parts for religious use; 1,175 of these orders were for whole bird carcasses.

2004 - The National Eagle Repository filled 1,851 requests from Native Americans for eagles and eagle parts for religious use – a record number.

From 2005-2016  the information reported about the Denver Eagle Repository is much more fragmented. But one thing is very clear. Carcasses being received and shipments of body parts received by the Repository have exploded risen sharply up to 5009 in 2016. The majority of these eagle shipments are bald eagles. 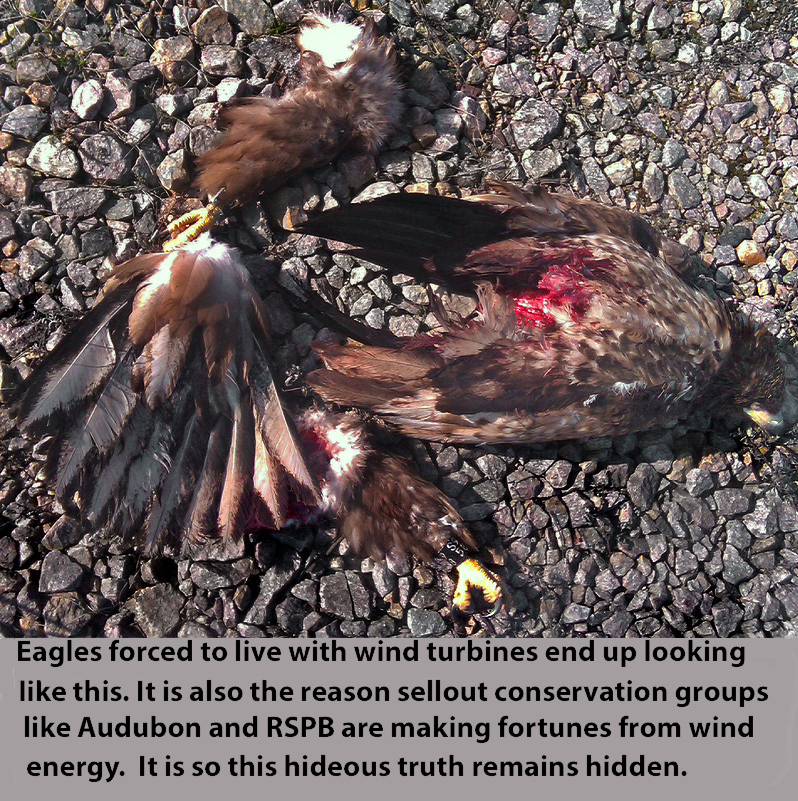 In 1997 when California’s turbines were small and damage to eagle carcasses was less severe, 79% of Repository orders filled were for whole eagles.   In the years 1997-2016 orders filled for eagle parts and feathers jumped by more than 11 times from 229- 2600.

2005 - The National Eagle Repository filled 1,805 requests from Native Americans for eagles and eagle parts for religious use.

2006 -  The National Eagle Repository filled 2,237 requests from Native Americans for eagles and eagle parts for religious use.

2007- The National Eagle Repository filled 2,369 requests from Native Americans for eagles and eagle parts for religious use.

2008 - The National Eagle Repository filled 2,714 requests from Native Americans for eagles and eagle parts for religious use.

2009 - The National Eagle Repository filled 3,270 requests from Native Americans for eagles and eagle parts for religious use.

2010 –  No official repository data found, but quotes in articles from Repository employees were reporting over 2000 eagle carcasses are being received annually by the Repository.

2011-  No official repository data found, but quotes in articles from Repository employees were reporting over 2000 eagle carcasses are being received annually by the Repository.

2012 - No official repository data found, but quotes in articles from Repository employees were reporting that over 2000 eagle carcasses are being received annually by the Repository. 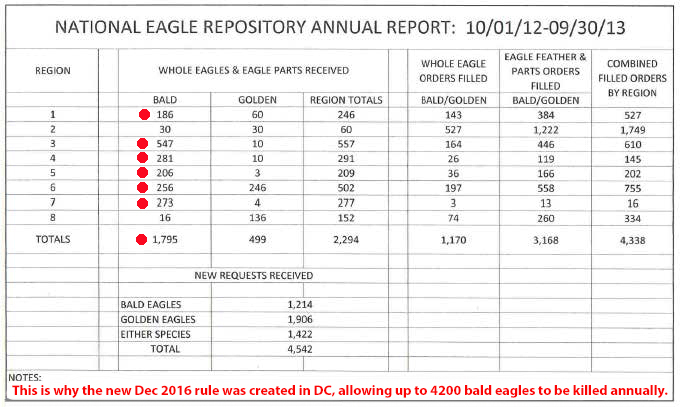 2014 -     Whole and eagle parts received reported to be 2309.  Other data was eliminated because I had made public the changing carcasses numbers in the regions of wind energy development. 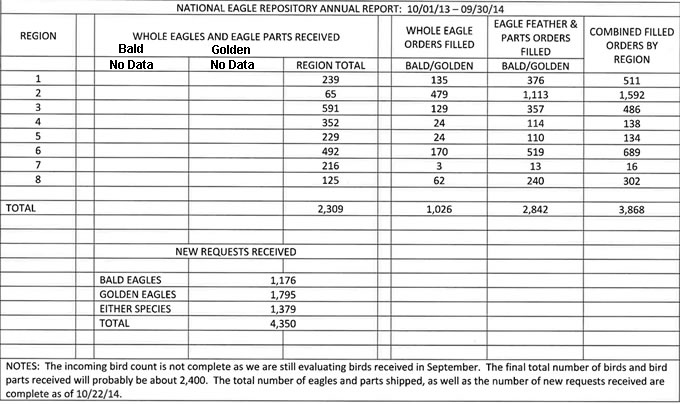 2015 -     The Eagle Repository was very active receiving and filling requests for bald and golden eagles and their parts. In 2015, 3,678 orders were filled and 4,155 new requests were received.

Until yesterday I had not reviewed these Repository statistics for several  years. But for everyone looking at them, it should be easy to see, by adding a conservative  estimate of 2700 dead eagles for 2017, the  Denver Repository has processed the remains from over 50,000  eagles since 1997.

Remember these are 50,000 plus eagle carcasses for which no cause of death or origin has been given by Interior department.  My estimate for the origin of these eagles is that at least 50% of these eagles are wind turbine related and 66% is probably more accurate. Lastly keep in mind that wind farms do not find or even report all eagle fatalities. I know this from my interview with an employed Wind Tech. 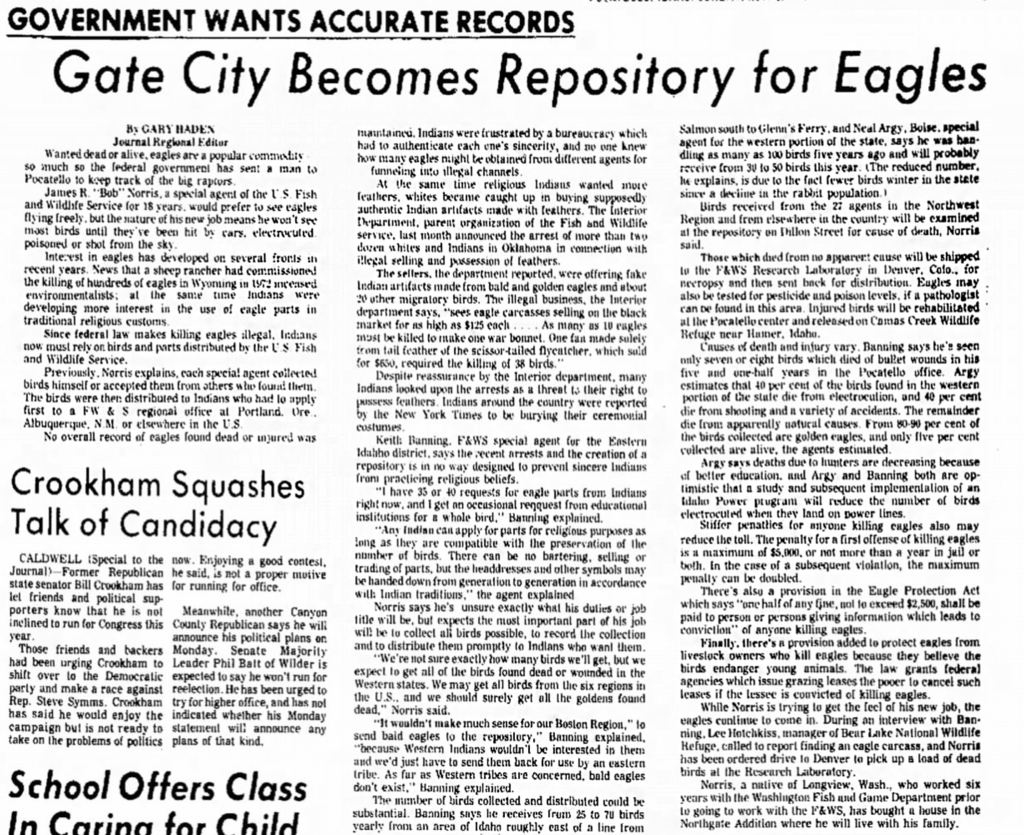 In the big picture, all these dead eagles represent something else far more sinister..................  What good are any of our laws if  selective enforcement is being driven by the corrupt? 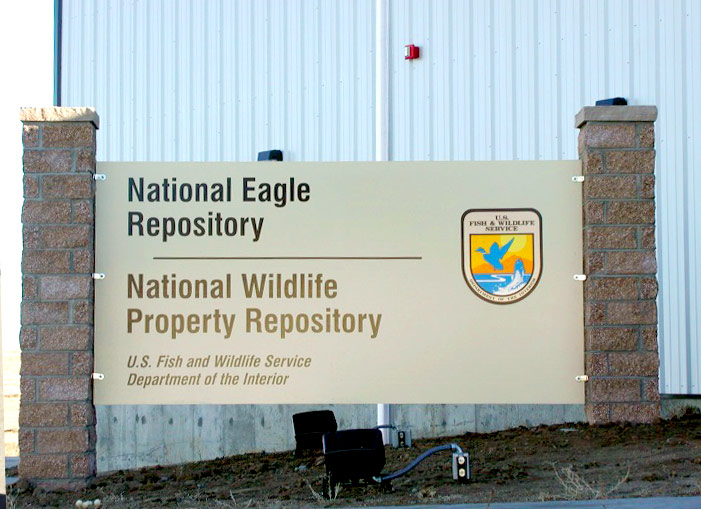 The National Wildlife Property Repository is housed in the same facility as the National Eagle Repository which serves to provide Native Americans with the feathers of golden and bald for religious and cultural purposes.