On Monday, the Seattle City Council passed a resolution that adds the city to the list of municipalities that have committed to a local version of the Green New Deal. More than 100 cities have now declared their intent to obtain all of their electricity from renewables or “clean” energy sources. Furthermore, the Sierra Club claims that one in four Americans now live in communities that are “committed to a transition to 100% clean, renewable energy.”

While there’s no doubt that renewable energy is politically popular, there’s also no doubt that wind energy projects – both onshore and offshore – are facing increasing opposition and that, in turn, could cause the all-renewable goals to be missed.

To be sure, the US wind industry is growing. Overall capacity tripled over the past decade and an estimated 13,000 megawatts will be added this year. But recent news out of Oregon, Massachusetts, North Dakota, and Germany shows that regulators, local governments, and environmental groups are slowing or derailing wind projects. Furthermore, the industry is also facing the expiration of the federal production tax credit, the lucrative subsidy that has driven much of its growth.

History shows that when the tax credits dry up, new wind-energy installations plummet. In May, the Energy Information Administration underscored this point, explaining that in 2012, (just before the PTC was temporarily phased out) the “high level of annual capacity additions…was driven by developers scheduling project completion in time to qualify for the PTC. Similarly, the increase in annual capacity additions for wind scheduled for 2019 is largely being driven by the legislated phaseout of the PTC extension for wind.”

The industry is also facing regulatory uncertainty. Last week, the Trump administration announced that it was delaying approval for Vineyard Wind, a proposed $2.8 billion, 800-megawatt offshore wind project that aims to put dozens of turbines in the waters off Martha’s Vineyard. The delay will allow federal agencies to do a “robust cumulative analysis” of the environmental impact of offshore wind projects.

The federal delay on Vineyard Wind came about three weeks after the conservation commission in Edgartown, Massachusetts voted 5 to 1 to deny a permit that would have allowed the wind project’s high-voltage transmission cables to pass through the Muskeget Channel. The commission said the project’s owners did not submit “sufficient information to protect against long-term and short-term adverse effects on the resource area,” which they said “is critical for the protection of marine fisheries, land containing shellfish, storm damage prevention, flood control, and protection of wildlife habitat.”

Wildlife concerns were a factor in an August 1 ruling by the Oregon Supreme Court which will halt the construction of the proposed 194-megawatt Summit Ridge wind project near the Deschutes River. The court invalidated a set of rules that were adopted in 2017 by the Oregon Energy Facility Siting Council that limited public participation in the siting of new energy projects. The ruling is a win for nine environmental groups who were opposed to the wind project, which according to a spokesman for Oregon Wild, “threatened bald eagles, golden eagles and several other important bird and bat species.”

In June, the North Dakota Public Service Commission unanimously rejected a 200-megawatt wind project in Burke County due to concerns about wildlife. According to the Grand Forks Herald, in 2016, officials from the North Dakota Game and Fish Department said that NextEra Energy, the developer of the proposed project, “could not have picked a worse spot.” In March, the US Fish and Wildlife Service recommended against the project due to the number of bald and golden eagles in the region, which also has a “high concentration of significant, relatively rare, high quality breeding waterfowl habitat.”

In February, Apex Clean Energy withdrew its application to build 108 megawatts of wind capacity on New York’s Galloo Island, a small island off the eastern shore of Lake Ontario. The project was withdrawn after Clifford Schneider, a retired biologist who worked at the New York Department of Environmental Conservation for 34 years, discovered that Apex knew that bald eagles had been nesting on Galloo Island but didn’t disclose that information in a timely manner to state regulators.

Nor are the concerns only about wildlife. In May, in Indiana, Tippecanoe County commissioners voted 3-0 for a zoning ordinance that prohibits wind turbines taller than 140 feet. According to the local newspaper, the commissioners decided the “county couldn’t afford to hamstring other kinds of development with long-term leases tying up tens of thousands of acres.”

Perhaps the most remarkable example of the opposition to wind energy can be seen in Germany, a country that has long been touted by renewable-energy advocates as a model to be copied. Last year, climate activist Bill McKibben declared that “Germany has shown..................... 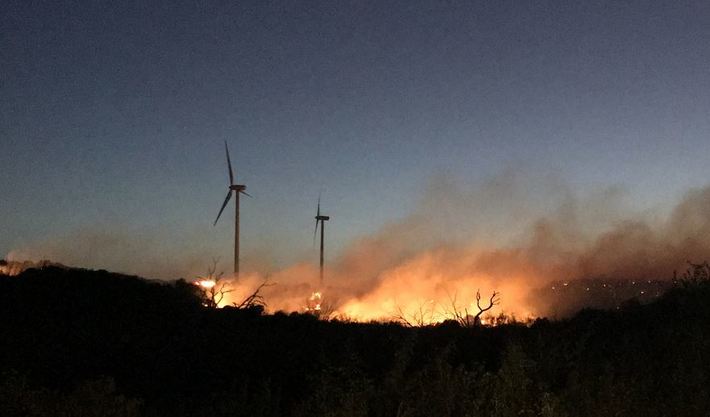 A wind turbine caught fire in southwest Taylor County in Texas. Crews worked through the night to contain the flames but it had already spread to 200 acres and was only contained by 50%. The fire appears to be caused by turbines at the Buffalo Gap wind energy facility located SSW of Mulberry Canyon. Buffalo Gap was built in three phases beginning in 2006. Phase I consists of 67 Vestas V80 turbines for a total capacity of 120.6 MW. Phases II and III include 155 GE SLE turbines and 74 Siemens turbines. The total installed capacity for the three phases is 523.2 MW. The fire is being called the Rhodes Ranch 3 fire. The Rhodes Ranch 1 fire, which happened in 2009 and burned 2000 acres, was also caused by a wind turbine. Buffalo Gap is owned and operated by AES Wind Energy.

As wind energy thrives, so does its waste problem

or environmentalists, wind energy is the crown jewel of renewable resources. But once it’s time to close the wind farm down, the industry’s waste problem becomes counterintuitive to its green mission.

Over the last two years, Rob Van Vleet has been slowly scraping the last vestiges of Kimball, Nebraska’s first wind farm. The wind turbines are made to be sturdy, he said, but they don’t last forever – about 20 years.

While most of a turbine can be recycled or find a second life on another wind farm, researchers estimate the U.S. will have more than 720,000 tons of blade material to dispose of over the next 20 years, a figure that doesn’t include newer, taller, higher-capacity versions.

There aren’t many options to recycle or trash blades, and what options exist are expensive, partly because the U.S. wind industry is so young. It’s a waste problem that runs counter to what the industry is held up to be: a perfect solution for environmentalists looking to combat climate change, an attractive investment for companies like Budweiser and Hormel Foods and a job creator across the Midwest and Great Plains.