Audubon selling out the wildlife at Altamont

The new turbines were declared safer at Altamont after conducting rigged studies with search areas 10 times too small and using other tricks. One of those tricks was to exclude over 1500 carcasses for various reasons.  Altamont is not just replacing turbines. They are expanding and adding millions more raptor killing cubic feet of rotor sweep these ridgelines. When they are finished repowering at Altamont, these killing fields will have more than twice the deadly rotor sweep as before. 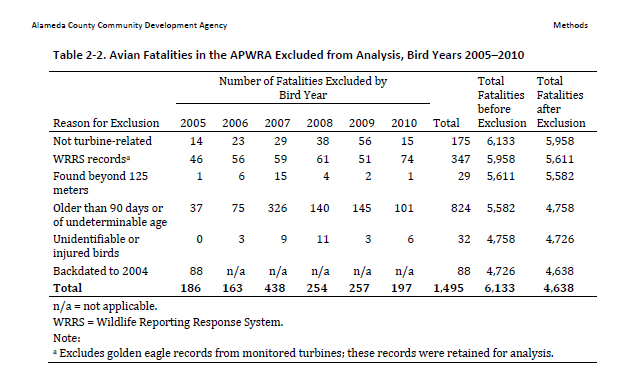 After adding another 21 eagle fatalities to the other carcasses dismissed from the data, there were a total of 1516 excluded carcasses. Honest studies with daily searches and large search areas would have included virtually all these turbine victims in the data.

From the Altamont Repowering Settlement that Audubon agreed to......

From the 15 page settlement............... The 2007 Settlement Agreement requires the Wind Power Companies to reduce raptor mortality by 50% and to implement adaptive management measures if a 50% reduction in mortality is not achieved.

8. Covenants Not to Sue......... The AG, Audubon and CARE hereby release any and all existing and future claims against NextEra Wind (including any new entities formed for repowering or other purposes stated herein) and the NextEra Settlers, with respect to any and all avian and bat mortality at the APWRA for existing and repowered turbines. If, for any reason, this Agreement or any portion thereof is terminated or otherwise deemed invalid, the release of existing and future claims by the AG, Audubon and CARE will continue to apply to any phase of repowering for which Approvals have. been obtained.

The big question here is that why would Audubon, a wildlife organization,  ever agree to all these ridiculous terms written up by wind industry lawyers?......  Money.

Correction ...............When they are finished repowering at Altamont, these killing fields will have more than 5 times the deadly rotor sweep as before.