Angus King Query: Was the SunEdison Crew that Just Dealt out $2.5 million in "Mitigation" Protected by Angus King back in the 1990's?

It appears that at least two persons involved with SunEdison (which acquired First Wind) were with Kenetech, a wind company that set aside $300,000 in "mitigation" for so called Maine environmental groups in the 1990's. The two persons are Michael U. Alvarez, SVP Global Operations of SunEdison and Mark Lerdal, Independent Director of TerraForm Power, a SunEdison affiliate.

Apparently both of these fellows worked for Kenetech. Appearing below (in a blue font) is an excerpt from a 9/1/95 article references the "mitigation" money set aside by Kenetech in Maine some 20 years ago and how then Governor King may have interfered on behalf of Kenetech. It seems some things never change.

- King of course later started Independence Wind and along with his secret backer (shell company "Bayroot", later revealed to be the Yale Endowment), received a $102 million Dept of Energy loan guarantee for his Record Hill wind project that defiled Roxbury Pond.

- King got this $102 million loan guarantee after U.S. Congresswoman Chellie Pingree wrote a letter of recommendation - recommending they give him the money

- Pingree's then husband, S. Donald Sussman (then largest media owner in Maine) we learned was the person who staked longtime First Wind half owner D.E. Shaw $28 million to give Shaw its start. It would be fair to say that Sussman's Maine newspapers such as the Portland Press Herald were very biased in favor of the wind developers.

- Adding to the previous bullet, let's not forget that First Wind finagled a huge payday in ARRA funds for Stetson I. ARRA money was specifically intended for projects that were "shovel ready" and would 'create jobs to boost the economy'. Why then did the Feds give First Wind an ARRA grant for Stetson I... AFTER IT HAD BEEN BUILT AND COMMISSIONED???

It just goes on and on and on.

How much longer are we going to be hustled by these rent-seeking insiders who line their pockets at our expense, destroy Maine, send our electricity rates skyward and pay off anybody in their way -- all with money taken from taxpayers?

As part the approval, Kenetech must release data immediately on possible bird impacts, include in its final plan information on power contracts with buyers of electricity, submit details of soil studies and erosion control plans, and show how it might minimise road construction at the sute. Commissioners, however, rejected a proposal to have Kenetech build the project in phases -- a scenario the wind company vehemently opposed -- and elicited a promise that Kenetech award at least 80 to 90% of the construction jobs on the wind farm to locals. The state has a high jobless rate.

The project is broadly supported by environmental groups. Kenetech has agreed too to set aside $300,000 to buy land to be permanently protected against development, and has pledged $150,000 for state research on golden eagles. "We believe that on balance, this project will have a positive impact on both the people and the environment of Maine," four environmental leaders wrote in a newspaper editorial in July.

Charges of political interference stem in part from ties between the state's leading politician and local Kenetech representative, Chris Herter. Governor Angus King and Herter have been friends for 20 years and were once business partners in a hydro project. Kenetech's Maine attorney also worked for the governor last year. State planning director Evan Richert argued for zoning changes as a paid consultant to Kenetech before he was appointed by King.

But the most eyebrow raising turn of events took place in June when King's conservation commissioner, Ronald Lovaglio, replaced LURC staffers who gave Kenetech's project a negative review. They had pointed out that the potential impact on the fragile mountainous soils and endangered birds were serious project flaws. Following the staff replacements, another LURC employee resigned, protesting against heavy-handed tactics.

Information on Alvarez and Lerdal is below. The first screenshot is from a Kenetech SEC filing. The next screenshots show their connection to SunEdison today. 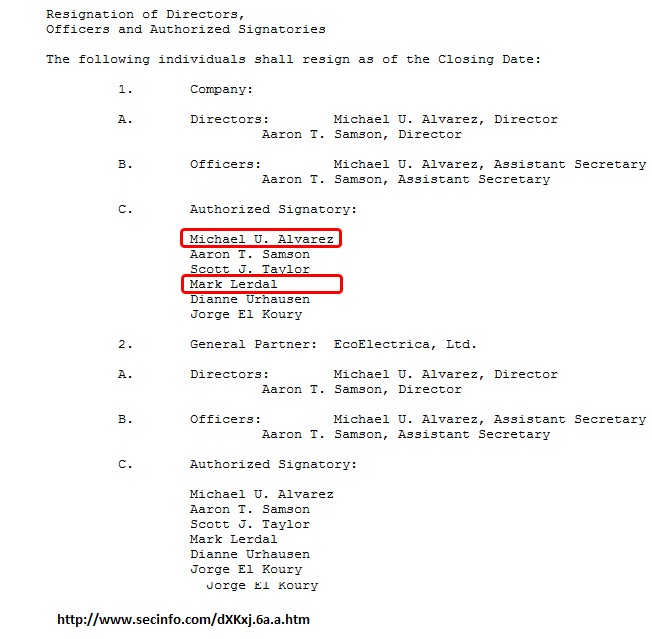 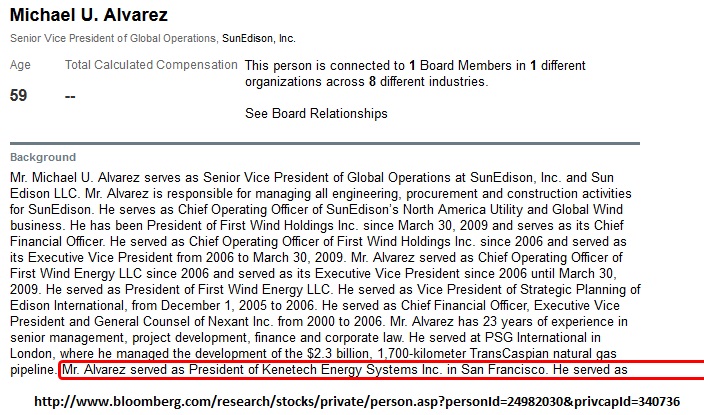 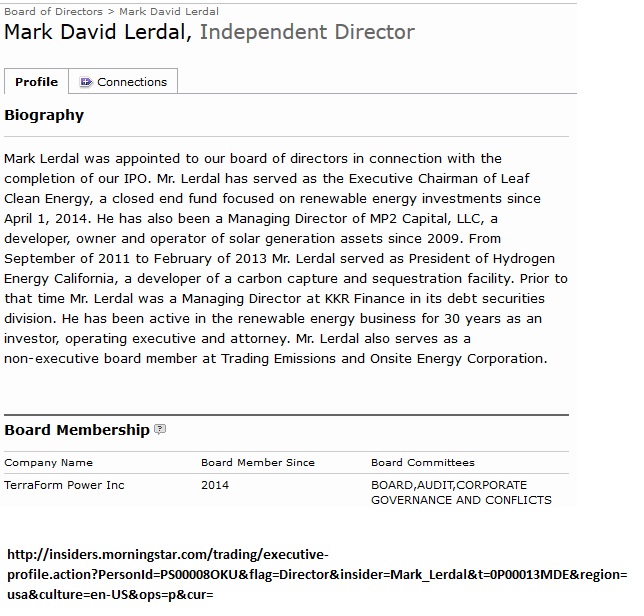 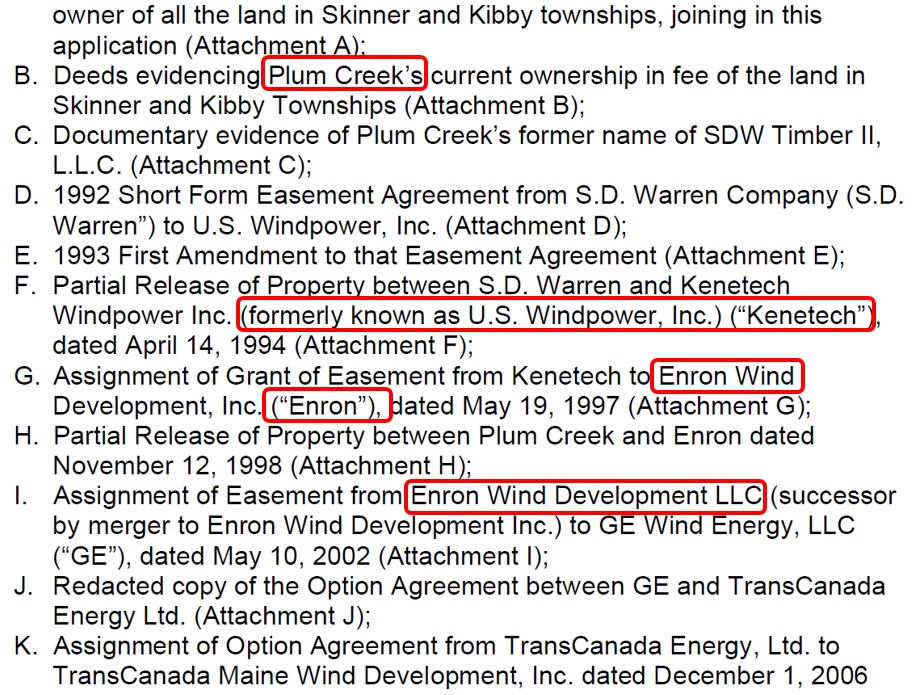 Nothing beats a tree. Indeed.

The large woodland owners are rubbing their hands together, no doubt, at the thought of the wind turbine lease payments.  I can't blame them, it must be a huge temptation and a way to maximize woodland profits. Large woodland owners should be exploring the carbon credit market, and instead of shaving the forests for wood pellets and heaven forbid wood alcohol, they should manage for sustainable high end long term products like lumber, with by-products from thinning and woodlot upgrading to be used for other purposes like wood pellets. The paper mills seemed doomed but lumber can't be replaced or outsourced.  Maine grows great forests.  Trees are valuable on the stump for CO2 sequestering, oxygen production, water filtration, erosion control, cooling in summer and warming in winter, wildlife habitat and of course producing water vapor which completes the loop.  Why should these useless metal machines be given all the fanfare?  Nothing beats a tree.

I am afraid, the only thing they are listening to is the "Siren Calls"
....the Sirens sing a song so irresistible that none who hears it can escape. (Homer... The song of the Sirens)
It is not the rustling of leaves they hear in the highland winds, but the crumpling of corporate corruption $$$$ cash, as they part the wood land jobs, their future to be robbed.

Is anyone listening and does anyone care?  In the BDN business brief today we find out that LePage now supports large wind farms in Maine because of the money they pump into the local economy through "tangible benefits".  Look for more large wind projects in Aroostook County and elsewhere, but does anyone really care? https://mail.aol.com/webmail-std/en-us/suite

Outstanding research and presentation. Is anyone listening?