Most blades for onshore wind projects span more than 200 feet apiece, while the largest offshore blades can span a football field. 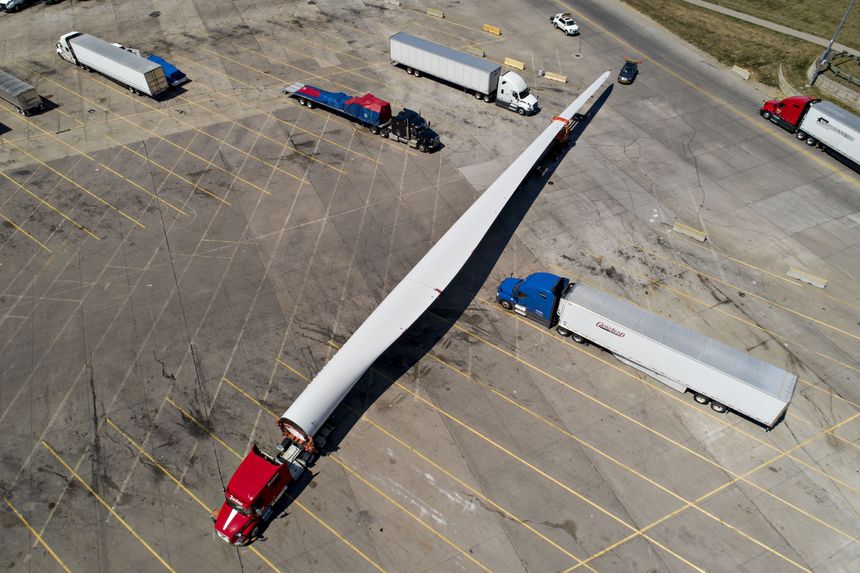 Wind turbine makers continue to struggle due to supply-chain woes and uncertainty over the future of federal tax credits, so much so that analysts are projecting slowing growth for U.S. wind power next year.

Despite strong demand amid a shift toward renewable power, many companies are having a hard time delivering turbines on budget and on schedule due to shipping delays, rising steel costs and other problems.

Shares of Vestas Wind Systems VWDRY -4.57% A/S fell 18% on Wednesday after the turbine maker said supply-chain problems would slice into margins. Siemens Gamesa Renewable Energy SA GCTAY -4.02% said on Friday that it expects shortages and bottlenecks to extend into next year and have an impact on operations. Its shares dipped 3% on Friday and were down 20% for the week.

Global transportation jams are getting worse, not better, said Vestas Chief Executive Henrik Andersen, who said improvements will take “quarters” into 2022 to see. “The visibility is relatively low,” Mr. Andersen said in an interview.

“The market is expecting the situation will change and will go back to normal,” Siemens Gamesa Chief Executive Andreas Nauen told analysts on Friday, “but we surely don’t know exactly when this will happen.”

The companies also face uncertainty over the timing of future orders because Congress has yet to pass a spending bill that includes an extension of wind tax credits. General Electric Co. said last week that the lack of clarity on credits has cut into orders. It now expects negative free cash flow for its renewables business this year.

As a result of these and other issues, new onshore wind-power installations in the U.S. are set to tumble nearly 30% next year, according to research and consulting firm Wood Mackenzie.

Builders of wind farms also have been watching port backlogs and raw materials prices and wondering if costs might come down in a few years. The thinking for some is, “Why bother” paying higher costs today, said Shashi Barla, principal analyst for global wind supply chain and technology at Wood Mackenzie.

“Onshore has been by far the market with the strongest impact from supply-chain bottlenecks, late deliveries on specific components and also the increase of the freight cost and the lack of capacity,” said Beatriz Puente, chief financial officer of Siemens Gamesa, on Friday.

The U.S. onshore wind market is the second-largest in the world after China and has an outsize impact on sentiment about the industry, said Sean McLoughlin, director of industrials and clean technology research at HSBC Global Research.

“The heavier, the bigger the equipment, the more challenges you’re going to have,” Ms. Karp said. “Wind turbines are huge and more difficult to ship.”

Most blades for onshore projects span more than 200 feet apiece, while the largest offshore blades can span a football field. Moving such equipment requires special trucks, large cranes and big ships. But even the transportation costs for what can be moved in a container—a much simpler logistics job—have increased as much as eight to 12 times this year, Mr. Andersen said.

Steel, resins and aluminum prices have surged in unexpected ways. “It’s the instability that is damaging. It is the volatility,” Mr. Andersen said. “We are talking about double-digit, three-digit percentage changes within quarters. That’s unprecedented.”

Vestas has been talking about these issues for months, but its message this week was more stark, sending shares down, analysts said.

“They’re not seeing any of these pressures abate. Next year is going to be challenging,” said Deepa Venkateswaran, senior renewables analyst at Bernstein Research. “It was a more downbeat message.”

Write to Jennifer Hiller at jennifer.hiller@wsj.com

Environment Maine - who funds you?