U.S. Seeks to Approve Dozens of Offshore Wind Projects in Years to Come

WASHINGTON/LOS ANGELES, May 25 (Reuters) – The Biden administration will seek to approve more than a dozen offshore wind projects in the next four years and open the Pacific Ocean off California to such development as it seeks to bolster the nascent U.S. industry, officials said on Tuesday.

The effort is part of the administration’s broader plan to fight climate change by decarbonizing the U.S. power sector by 2035 and the entire economy by 2050.

Quote: "I will do anything that is basically covered by the law to reduce Berkshire's tax rate, for example, on wind energy, we get a tax credit if we build a lot of wind farms. That's the only reason to build them. They don't make sense without the tax credit."

Per standard Wall Street practice for tax-sheltered projects, the cash value of the subsidies is about 45% of the project turnkey cost, which includes the costs of: 1) financing, 2) subsidies, 3) owner’s return on investment.

The subsidies are “front-loaded”, i.e., about 40% is recovered by GMP in the first 5 years, the other 5% in the remaining years, i.e., skimming the fat off the milk for GMP in the early years, and long-term increased costs for ratepayers and taxpayers.

1) Grants from various sources, such as the VT Clean Energy Development Fund

3) 100% depreciation over 5 years; the normal for utilities is 20 to 25 years. Write-offs reduce GMP taxable income 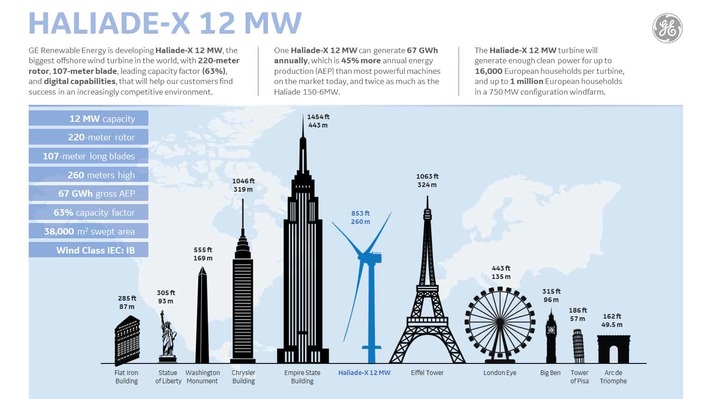 Almost the entire physical supply of US East Coast offshore wind systems would be by European companies, because they have the required expertise and the domestic onshore and seagoing facilities, due to building at least 25,014 MW (end 2020) of offshore turbine systems, during the past 35 years.

The EU vs the US

The US, with a low-cost, self-sufficient, energy sector would attract European, Korean, Japanese, etc., energy-intensive, heavy-industry and industrial product production to the US.

Europe is interested to make sure the US has a high-cost electrical sector, with lots of high-priced wind and solar and batteries, to handicap the US, and to enhance its competitiveness vs the US. The UN is helping out by urging the US to expensively reduce its CO2 by 50% by 2030, which is not possible. See URL.

- Europe has to build out wind and solar to limit energy imports from unstable countries; the US does not need to.

The below image shows an output simulation, MW vs calendar time, based on actual, high-wind-speed, weather data, if 1,600 MW of offshore wind turbines would be located south of Martha’s Vineyard Island, MVI.

The almost 1,600 MW downward spikes of output, in a few hours, are far from trivial. They would create major havoc, if fed into the existing Cape Cod grid. ISO-NE has made studies of the impacts on existing grids, and costs of grid upgrades/extensions.

The wind turbines would be about 850 ft tall, with highly visible flashing strobe lights, even at 25 miles south of MVI.

The flat lines at the top of the image are due to the automatic limiting of the wind turbine output by feathering the rotor blades, to avoid high-speed winds destroying the wind turbines.

During weather with high wind speeds, wind output is extremely variable, as proven by the image!
ISO-NE has to make sure such extremes would be manageable under various scenarios, i.e., no surprises!

Existing CCGT plants, several thousand MW, would have to be in good operating condition, staffed and fueled, i.e., ready and able, to rapidly adjust outputs to counteract such extreme spikes.

- The existing CCGT plants would be inadequate to counteract them, i.e., output curtailments would be required.

- The 2035 date has a ring of urgency to it, but likely would be unattainable in the real world. See page 13 of NE-pool URL

It would take at least 20 years to build out 13,500 MW wind turbines off the coast of New England, plus large-scale solar systems to reduce the NE grid CO2/kWh by about 30%

2) Major connections to the Canadian grid

The Netherlands is one of the major beneficiaries.

German households get to “enjoy” the highest electric rates in Europe, about 2.5 times as high as the US

Denmark, another wind country, is second!

The ocean waters near Maine are deep. Almost all offshore wind turbines would need to be floating units, anchored at the seafloor with at least 3 long cables.

The 700-ft tall wind turbines would need to be located at least 25 miles from any inhabited islands, to reduce the visuals, especially with strobe lights, 24/7/365

The wind turbines would be far from major electricity demand centers, such as Montreal and Boston.

All that would make the cost of electricity produced by these wind turbines more expensive than those south of MVI.

Maine is in active discussions with stakeholders to add 751 MW of onshore wind turbines.

Maine is not in active discussions with stakeholders to add offshore wind turbines, as shown by the interconnection proposals on page 13 of URL