THE SLOW DESCENT OF SUNEDISON

AND TAXPAYERS , FORCED AND UNWILLING STOCKHOLDERS WITHOUT ANY HOPE FOR REWARD EXCEPT TO "SAVE THE PLANET", UNABLE TO PARTICIPATE IN COMPANY DECISIONS, CAN ONLY SEE THEIR MONEY MISUSED DUE TO GOVERNMENT INVESTMENT MALPRACTICE. GRAND THEFT.

SunEdison, the biggest solar-energy manufacturing firm in the entire world, is nearing bankruptcy.

Its decline has been swift and brutal, taking some of the most legendary names in finance with it.

The stock that was once a hedge fund darling has turned into Wall Street's nightmare.

A company that was once worth more than $10 billion is now valued at $150 million, with close to $8 billion in long-term debt.

This is because the company's business structure, which was once considered quite complex, was in a matter of months found to be quite simple — it simply could not generate enough cash.

My only comment is that it was hardly slow, it happened in a matter of months, but it did not happen soon enough for a lot of damage to be done. At this point what has been done can never be returned to what it was.

Monique... Now wouldn't be a Hoot! An already sold LLC making promises they know they can never keep.

I hope and wonder if the deal set up between FMM and SunEdison has been honored :

“I thought spending 2.5 million dollars of someone else’s money would be easy,” said Chris O’Neil, the independent public affairs and policy consultant who negotiated both the FMM-SunEdison agreement and the various conservation deals.  “But my client quickly learned it could have funded 25 million dollars worth of desirable projects, had the money been available. That said, we are pleased to recoup so much good from such a big loss.”

Beneficiaries for the first $1.5 million include the Trust for Public Lands, the Appalachian Mountain Club, the Maine Appalachian Trail Land Trust, the Forest Society of Maine the Atlantic Salmon Federation, and Mahoosuc Land Trust.  The conservation projects are located across Maine, from the western mountains through the Moosehead and Hundred Mile Wilderness regions to Katahdin. FMM is not a beneficiary of the fund.  (See a list of the organizations, contacts and the funded projects by clicking here.)

-  SunEdison will not build future wind projects in agreed-upon sections of Maine. See map by clicking here.  For a smaller JPG file click here.  A key part of this “Exclusion Zone” is a 15 mile buffer from both Baxter State Park, and from either side of Maine’s 281 mile Appalachian Trail.  While this no-build zone applies only to Maine's largest wind company, SunEdison, FMM thinks it sends a strong message to other wind developers: back off.

-  $250,000 will be dedicated to research wind turbine bat deterrent technology.  The grant will go to Bat Conservation International, which is conducting research on the brown bat species, which has been threatened in the northeast by white-nose syndrome.

-  SunEdison has increased by 50% the decommissioning fund that it had to set aside for the Bingham Wind Project. Moreover, in years 5, 10, and 15 the fund must be re-evaluated and will be increased by at least 1.5% in each of those years.  During the permitting process in 2014, FMM had objected to what we determined was an inadequate decommissioning fund being imposed by DEP under the terms of the permit.

Again, FMM was not pleased to see the Bingham Wind Project proceed, but we hope that the provisions of this agreement will soften the blow for Maine.  It has been an arduous process but we finally have it finished, so now we can devote our full attention to our mission. 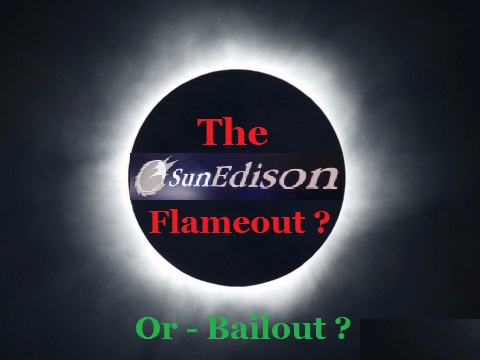 Good comment...but be sure, this failure is by design and all principles in the company have been and will be well compensated...investors & taxpayers are biggest losers...as usual in green power subsidized businesses.  Taxpayer bailouts will follow and bargain basement wind & solar projects will be sold...but buyers beware...