Here is a Shellenberger article regarding Germany’s Energiewende.

Millions of Germans must be getting ticked off by now, as it is beginning to dawn on them, after at least a decade of extortion from their wallets, and being deceived by the RE disinformation fog, additional $trillions would be required to go from 35% electricity from RE (mostly variable/intermittent wind and solar) to 90%, which would be only about 40% of all primary energy.

What about the $trillions for the other 60% of primary energy? A German New Green Deal?

Very few people, even many engineers, do not understand each additional percent of variable/intermittent RE (wind and solar) would be more costly to implement and more costly to operate than the prior percent, an exponential cost/complexity increase, even though cost/MW of wind and solar have been decreasing in recent years.

About 5 years ago, I made an Energiewende capital cost estimate of $1.7 trillion for 90% RE by 2050, by extrapolating existing trends. Some folks could not believe it would be that much. Oh well.

- Germany produces about 650 TWh of electricity per year, of which about 35% is highly subsidized via the Energiewende, etc.

- Germany needs to export about 10% of its electricity for grid operation reasons.

- The US produces about 4000 TWh per year, so any cost numbers for the US would be at least 6.5 times those of Germany.

- A recipe for high US household electric rates and long-term economic stagnation, unless China and India, etc., would similarly handicap themselves.

NOTE: I have added all the URLs for easy accessibility. 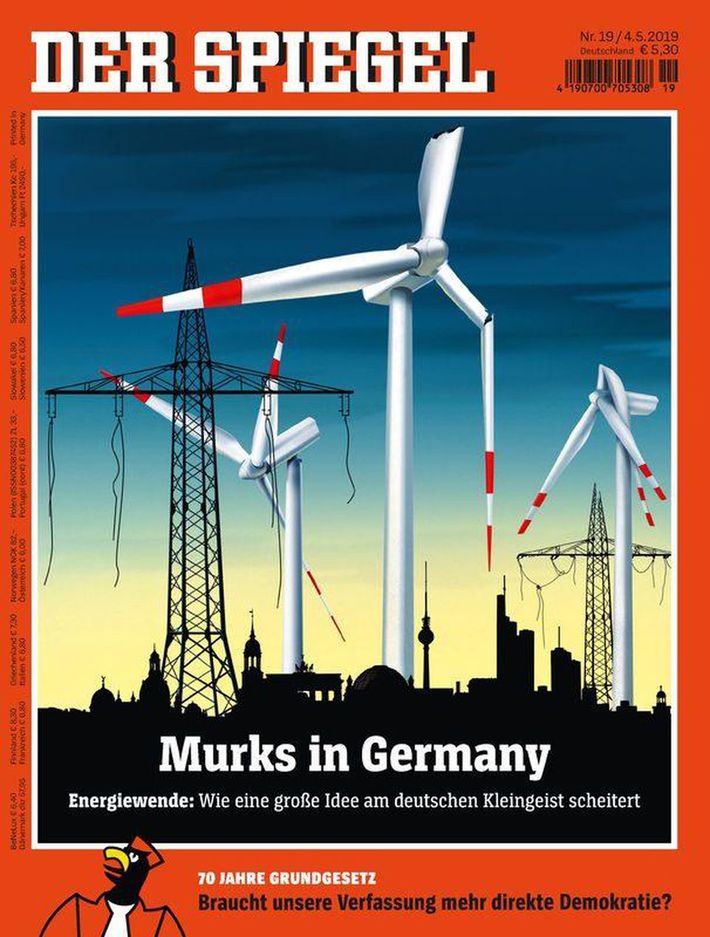 Over the last decade, journalists have held up Germany’s renewables energy transition, the Energiewende, as an environmental model for the world.

“Many poor countries, once intent on building coal-fired power plants to bring electricity to their people, are discussing whether they might leapfrog the fossil age and build clean grids from the outset,” thanks to the Energiewende, wrote a New York Timesreporter in 2014.

With Germany as inspiration, the United Nations and World Bank poured billions into renewables like wind, solar, and hydro in developing nations like Kenya.

But then, last year, Germany was forced to acknowledge that it had to delay its phase-out of coal, and would not meet its 2020 greenhouse gas reduction commitments. It announced plans to bulldoze an ancient church and forest in order to get at the coal underneath it.

After renewables investors and advocates, including Al Gore and Greenpeace, criticized Germany, journalists came to the country’s defense. “Germany has fallen short of its emission targets in part because its targets were so ambitious,” one of them argued last summer.

“If the rest of the world made just half Germany’s effort, the future for our planet would look less bleak,” she wrote. “So Germany, don’t give up. And also: Thank you.”

But Germany didn’t just fall short of its climate targets. Its overall CO2eq emissions have flat-lined since 2009.

“The Energiewende— the biggest political project since reunification — threatens to fail,” write Dem Spiegel’s Frank Dohmen, Alexander Jung, Stefan Schultz, Gerald Traufetter in their a 5,700-word investigative story (the article can be read in English here).

Over the past five years alone, the Energiewende has cost Germany €32 billion ($36 billion) annually, and opposition to renewables is growing in the German countryside.

“The politicians fear citizen resistance” Der Spiegel reports. “There is hardly a wind energy project that is not fought.”

In response, politicians sometimes order “electrical lines be buried underground but that is many times more expensive and takes years longer.”

Solar and wind advocates say cheaper solar panels and wind turbines will make the future growth in renewables cheaper than past growth but there are reasons to believe the opposite will be the case.

NOTE: That is a fallacy. Very few people, even many engineers, do not understand each additional percent of variable/intermittent RE (wind and solar) would be more costly to implement and more costly to operate than the prior percent, an exponential cost/complexity increase, even though cost/MW of wind and solar have been decreasing in recent years. 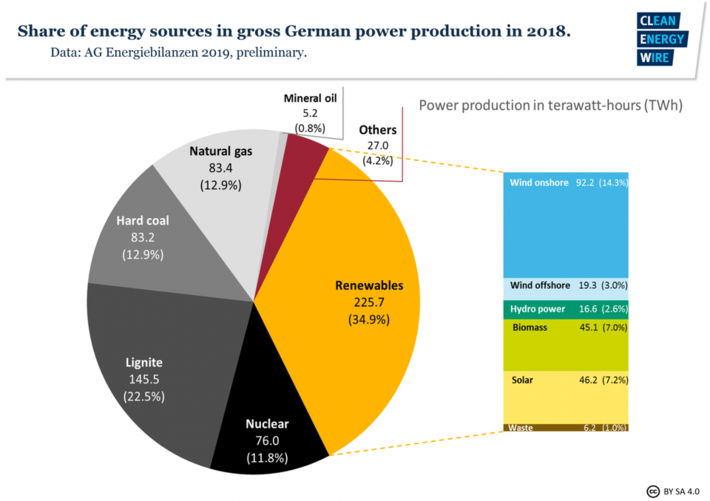 Between 2000 and 2019, Germany grew renewables from 7% to 35% of its electricity. About as much of Germany's renewable electricity comes from biomass, which scientists view as polluting and environmentally degrading, as from solar.

Of the 7,700 new kilometers of transmission lines needed, only 8% have been built, while large-scale electricity storage remains inefficient and expensive. “A large part of the energy used is lost,” the reporters note of a much-hyped hydrogen gas project, “and the efficiency is below 40%... No viable business model can be developed from this.”

Meanwhile, the 20-year subsidies granted to wind, solar, and biogas since 2000 will start coming to an end next year. “The wind power boom is over,” Der Spiegel concludes.

All of which raises a question: if renewables can’t cheaply power Germany, one of the richest and most technologically advanced countries in the world, how could a developing nation like Kenya ever expect them to allow it to “leapfrog” fossil fuels?

The Question of Technology

The earliest and most sophisticated 20th Century case for renewables came from a German who is widely considered the most influential philosopher of the 20th Century, Martin Heidegger.

In his 1954 essay, “The Question Concerning of Technology,” Heidegger condemned the view of nature as a mere resource for human consumption.

The use of “modern technology,” he wrote, “puts to nature the unreasonable demand that it supply energy which can be extracted and stored as such… Air is now set upon to yield nitrogen, the earth to yield ore, ore to yield uranium…to yield atomic energy.”

The solution, Heidegger argued, was to yoke human society and its economy to unreliable energy flows. He even condemned hydro-electric dams, for dominating the natural environment, and praised windmills because they “do not unlock energy in order to store it.”

These weren’t just aesthetic preferences. Windmills have traditionally been useful to farmers whereas large dams have allowed poor agrarian societies to industrialize.

In the US, Heidegger’s views were picked up by renewable energy advocates. Barry Commoner in 1969 argued that a transition to renewables was needed to bring modern civilization "into harmony with the ecosphere."

The goal of renewables was to turn modern industrial societies back into agrarian ones, argued Murray Bookchin in his 1962 book, Our Synthetic Environment.

Bookchin admitted his proposal "conjures up an image of cultural isolation and social stagnation, of a journey backward in history to the agrarian societies of the medieval and ancient worlds."

But then, starting around the year 2000, renewables started to gain a high-tech luster. Governments and private investors poured $2 trillion into solar and wind and related infrastructure, creating the impression that renewables were profitable aside from subsidies.

Entrepreneurs like Elon Musk proclaimed that a rich, high-energy civilization could be powered by cheap solar panels and electric cars.

Journalists reported breathlessly on the cost declines in batteries, imagining a tipping point at which conventional electricity utilities would be “disrupted.”

Efforts to export the Energiewendeto developing nations may prove even more devastating. The new wind farm in Kenya, inspired and financed by Germany and other well-meaning Western nations, is located on a major flight path of migratory birds. Scientists say it will kill hundreds of endangered eagles.

“It’s one of the three worst sites for a wind farm that I’ve seen in Africa in terms of its potential to kill threatened birds,” a biologist explained.

In response, the wind farm’s developers have done what Europeans have long done in Africa, which is to hire the organizations, which ostensibly represent the doomed eagles and communities, to collaborate rather than fight the project.

Kenya won't be able to “leapfrog” fossil fuels with its wind farm. On the contrary, all of that unreliable wind energy is likely to increase the price of electricity and make Kenya’s slow climb out of poverty even slower.

Heidegger, like much of the conservation movement, would have hated what the Energiewendehas become: an excuse for the destruction of natural landscapes and local communities.

Opposition to renewables comes from the country peoples that Heidegger idolized as more authentic and “grounded” than urbane cosmopolitan elites who fetishize their solar roofs and Teslas as signs of virtue.

Germans, who will have spent $580 billion on renewables and related infrastructure by 2025, express great pride in the Energiewende. “It’s our gift to the world,” a renewables advocate told TheTimes.

Tragically, many Germans appear to have believed that the billions they spent on renewables would redeem them. “Germans would then at last feel that they have gone from being world-destroyers in the 20th century to world-saviors in the 21st,” noted a reporter.

Many Germans will, like Der Spiegel, claim the renewables transition was merely “botched,” but it wasn't.

The transition to renewables was doomed because modern industrial people, no matter how Romantic they are, do not want to return to pre-modern life.

The reason renewables can’t power modern civilization is because they were never meant to. One interesting question is why anybody ever thought they could.