The US/Canada became the "Middle East of Trees" for the British Empire, BE, after the British chased France out of North America at the end of the Seven Year War, 1756 - 1763, also called French and Indian War.

By controlling access to the trees, France, Spain, The Netherlands, Denmark, Sweden, even in combination, could never build fleets of warships to challenge the UK.

There would have been no BE without that control.

A British warship, 60 to 80 guns, required about FOUR THOUSAND oak trees to build, each at least 100 years old.

Younger trees would deteriorate too quickly.

Some oak trees were grown in a bent position for greater strength to serve as ribs in ship hulls.

The BE had up to 800 such warships, plus many hundreds smaller ones.

Those warships, sailing on the High Seas had an average lifetime of 15 years.

Each ship required several times 4000 oak trees for retrofit and repair during the ship's lifetime.

The BE was getting oak trees, and tall, 2.0 ft plus diameter fir trees for masts, from the US/Canada, Norway and Russia.

Not Sweden, as it was an ally of France. The present Swedish King descents from a French general appointed King of Sweden by Napoleon. 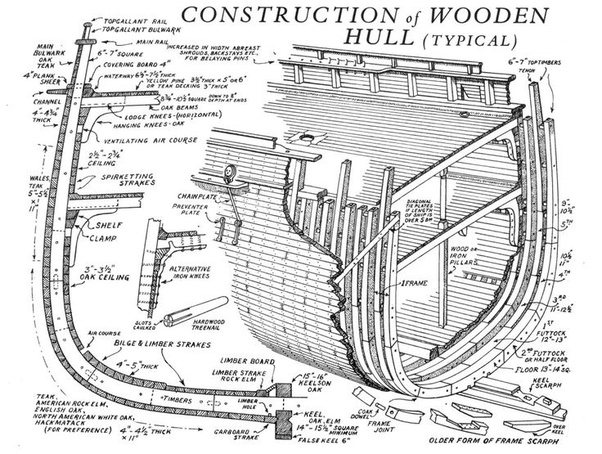 William Pitt, Prime Minister, had great foresight getting the French out of North America. After the French were out, oak tree imports from the colonies, including British-controlled Canada, significantly increased and became at least 75% of all such British imports.

Having control over such a large inventory of suitable trees enables the BE to be major sea power and maintain and grow a world empire from 1750 to 1900.

The BE, by continuing to buy from Russia, etc., and blocking the Baltic Sea, prevented the French and Spanish from having access to wood and other materials needed to build competitive warships and trading ships.

NOTE: Members of the Canadian Progressive Conservative Party had a strong power base in the Canadian economy. Having such a power base meant, sons would be schooled and trained to inherit and manage the companies of their fathers, etc. They favored strong trading ties with the BE. They aimed to conserve and progressively develop their ties with the BE. They were the business class active in the fast-growing lumber trade, railroad transport, finance, real estate, and manufacturing.

Members of the Canadian Liberal Party did not have a strong power base, and sons had much less chance to inherit and manage companies. As a result, the Liberal Party agitated for increased trading ties with the US to eventually build its own power base.

In those days, the budgets of government were a very small part of the GDP, i.e., few well-paying jobs were available in government.

After the Spanish Armada debacle in 1588, Spain had used up so many of its big trees, it could not build another Armada for at least 100 years, or build enough ships to rival the British and Dutch navies. It augured in a downhill trajectory for much of the debt-laden Spanish Empire.

Heavily armed Dutch war ships used to wait for Spanish silver ships coming from South America, hail them, and unload them, while at sea, to ensure the Spanish Empire paid back money owed to Amsterdam financiers. The Spanish ships were allowed to sail to Cadiz or Sevilla.

Napoleon aimed to isolate the BE from European trade by means of a blockade of European ports. When his blockade proved unsuccessful, he decided to invade Russia to get them to stop selling hemp, tar and trees, which were needed for British fleets. Denmark was an ally of Napoleon, so a large British fleet bombed Copenhagen, etc.

After Napoleon's Russia debacle, France was no longer a significant military power, on land or sea, from 1815 to the present.