THE GREEN NEW DEAL AND OUR WAY OF LIFE

In view of the grave concerns raised by 5 to 17 year old children on the impact of CO2 on the Earth’s climate, the government will introduce legislation to address the most pressing issue of our times, namely CO2 emissions and the ensuing climate mayhem that they cause. See Appendix 1.

The policy, inspired by the GND, has four main aspects, for starters:

As of 1 January 2020, juveniles below the age of 18 will no longer be allowed to fly on commercial flights within the USA and between the USA and foreign destinations. A reciprocal arrangement will apply to incoming flights that will not be allowed to land on US soil, if there are juveniles on board.

The government appreciates this will have a major impact on family holidays and tourism. But that is the policy goal. We can no longer allow families flying all over the place simply for the sake of seeking some sunshine. Tourism is just one of the most useless and resource wasteful activities known to Mankind. What is the point in wrecking the Earth’s climate to go and gaze at the Eiffel Tower, or to go visit Euro Disney, when an equally enjoyable time can be had at our homegrown attractions?

The government appreciates this is going to have a catastrophic impact on the airline and airport industries. But that is a policy goal. We can longer condone these evil, polluting companies. The US will press our allies throughout the OECD to follow suit.

Given time this should also have a catastrophic impact on the airplane manufacturing sectors. We expect Boeing and GE to be hardest hit.

2) An End to Cruise and Ferry Lines

The government is often accused of lacking foresight and we wish to stress that we are smart enough to recognize that selfish, polluting families may simply try to avoid the adult-only flight policy by using cruise and ferries boats instead. The government sees no way of tackling this problem other than to close down all cruise and ferry lines.

- The activity of transporting a two-ton SUV on board a ship running on filthy, dirty bunker fuel needs to be consigned to history.

- The idea of families boarding a ship to simply drive around Europe looking at stuff, while wrecking the Earth’s climate, needs to be stopped.

The government is aware that these policies may seem to be anti-tourism. Nothing could be further from the truth. We remain committed to a robust, albeit crippled, tourist industry.

3) An End to Driving to School

The government will introduce a ban on children being driven to school by their parents in petrol or diesel cars.

We will continue to allow children of very wealthy families to be driven to school in all-electric vehicles.

Hybrid plug-in electric vehicles will not face an immediate, ban but will be phased out over three years.

To enforce this ban children will be encouraged to spy on their friends (or enemies) by taking pictures of children covertly being dropped off just around the corner and sharing these images on social media. This should create a deterrent to “illegal child dropping”.

4) Phasing Out of Gas or Oil Heating Systems in Schools

The government will introduce a bill to phase out gas or oil heating systems in all our schools by 2022. Schools will instead be obliged to install all-electric heating that runs exclusively on in-situ, off-grid, renewable energy systems. Using the latest SMART technology it is anticipated that this should be simple and straightforward to achieve.

Here’s the clever part. Children of all ages (5 to 17) will be allowed to participate in designing these SMART heating systems. The Government does not have spare funds to support this initiative ,so schools will have to pay for it out of existing budgets. However, since renewable energy prices have tumbled, paying for this should not be a problem. If schools struggle to meet this bill, they will be encouraged to either lay-off staff or ask parents to pay for this vital flagship policy.

The temperature graph for Central England covering about 350 years is shown below. This chart was chosen, because New England does not have such a temperature record.

The UK is world leader in Climate Change Science and blessed to have one of the longest and continuous temperature records in the world called the Central England Temperature (CET) record that serves as a textbook example of the mayhem burning fossil fuels has caused to our climate. One just needs to look at how the lines wiggle up and down to understand the gravity of the problem. 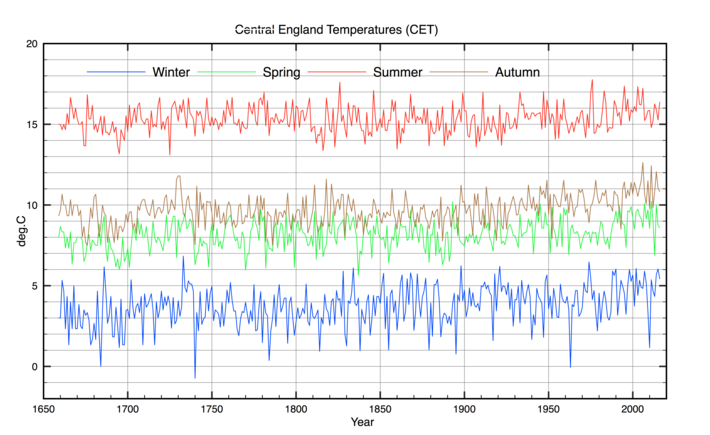 Figure 4 Central England Temperature record. The climate melt down since 1900 is there for all to see. British children are to set an example to the rest of the world by cutting out foreign holidays and walking to school

The CO2 fraction pro-RE folks think you should worry about.

The correct way to calculate the % (percent) change in CO2 in the Earth’s atmosphere is one of the great scientific challenges facing the climate science community today.

Our very survival and whether to spend 85 TRILLION DOLLARS to proceed with the GND depend on our scientists, politicians, etc., getting this right!

Credit for this appendix goes to Think Like a Mountain

- Unwashed commoners who prefer fractions over %'s: The increase in the atmosphere is:

- Unwashed commoners who prefer visualization by pie chart: The increase in the atmosphere is: 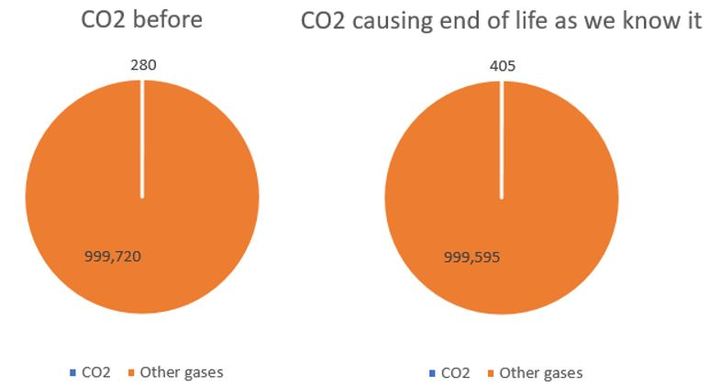 Maybe we'd be better off if we shifted from decarbonization to de-DiCaprio-ization.

Shall we graph his CO2 "footprint" versus that of the average unwashed commoner?

I have taken the liberty to make it part of the article, with due credit

You will learn how the Wall Street types benefit from the RE subsidy bonanza.

Wall Street and its paid RE sycophants will fight tooth and nail to maintain their profitable status quo.

They will give bribe money and study grants to whomever is spouting the right mantras to keep their party going.

The rest of US will be made to suffer/are collateral damage, until this hoax finally runs its wasteful course/dies out.

WIND AND SOLAR SUBSIDIES WOULD PROVIDE A BONANZA FOR WALL STREET

This URL shows wind and solar prices per kWh would be at least 45% to 55% higher without subsidies, and they would be even higher, if the costs of other items were properly allocated to the owners of wind and solar projects. See below section High Levels of Wind and Solar Require Energy Storage.

Then, with help of Wall Street financial wizardry from financial tax shelter advisers, such as BNEF*, JPMorgan, etc., the owner sells the project to a new owner who is allowed to depreciate almost his entire cost all over again.

The loss of tax revenues to federal and state governments due to MARCS is estimated by the IRS at $266 billion for the 5-y period of 2017 - 2021, about $53.2 billion/y; the IRS is required to annually provide a 5-yr running estimate to Congress, by law. This indirect largesse is in addition to total of direct federal and state subsidies to such projects of about $25 billion/y.

Warren Buffett quote: "I will do anything that is basically covered by the law to reduce Berkshire's tax rate," Buffet told an audience in Omaha, Nebraska recently. "For example, on wind energy, we get a tax credit if we build a lot of wind farms. That's the only reason to build them. They don't make sense without the tax credit."

So the alleged culprit is 125 parts per million of CO2 added by man, alternately stated as 0.0125%. To put this in perspective, 0.0125% of the 4,531 miles driving distance between Portland, ME and Fairbanks, AK would be 0.57 miles, just over half a mile. If you started driving to Fairbanks from Becky's Diner in Portland the .57 miles would get you to DiMillo's restaurant. You'd then need to drive an additional 4,530.4 miles to Fairbanks. So think about how the two minute drive down Commercial Street would compare to the rest of your drive. First over to NY state, then Ohio, Chicago, Minneapolis, North Dakota, Saskatchewan, Alberta, British Columbia, the Yukon and then the Alaska State line. You'd then have to drive another 285 miles or five hours to get to Fairbanks. That last leg alone would be like driving from Becky's to DiMillo's more than 500 times. That's how insignificant the 125 parts per million of CO2 is.

Since water vapor is by far the biggest greenhouse gas, I'm not sure adult flights should be permitted, either.  A more conservative measure might be to ban all flights and issue paddle boats to those who wish to cross the big pond.  This will also cut down on obesity.

My Sherlock Holmes observation : I suspect the solution is by far worse than the problem.

- Unwashed commoners who prefer fractions over %'s: The increase in the atmosphere is:

- Unwashed commoners who prefer visualization by pie chart: The increase in the atmosphere is:

Maybe we'd be better off if we shifted from decarbonization to de-DiCaprioization. Shall we graph his CO2 "footprint" versus that of the average unwashed commoner?

I love it. Thanks for posting.