The Charade of Industrial Wind in Maine: --- BY: PAUL ACKERMAN

"The Charade of Industrial Wind
in Maine"

Maine abounds in natural beauty. Historically there have always been practical and impractical uses of the Maine geography and waters. In recent years we have been brow beaten by a corrupt government philosophy into allowing an ever increasing degree of impractical destruction of Maine by the industrial wind industry, related power companies and businesses.

A better title may be...

yes..fly your banners at every meet

Why not schedule more than one protest? 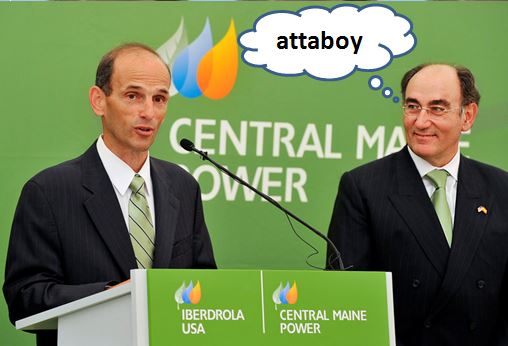 "The purpose of our direct action program is to create a situation so crisis-packed that it will inevitably open the door to negotiation .... Indeed, this is the very purpose of direct action .... It seeks so to dramatize the issue that it can no longer be ignored .... My citing the creation of tension as part of the work of the nonviolent resister may sound rather shocking. But I must confess that I am not afraid of the word "tension." I have earnestly opposed violent tension, but there is a type of constructive, nonviolent tension which is necessary for growth."

None of the public agencies and bureaucracies will take seriously any of your marvelous evidence about the follies and dangers of wind energy (including Nina Pierpont's, or Rick James's, or Glenn Schleede's, or God's for that matter) until -- à la Martin Luther King -- you demonstrate to them that they are going to have to take your evidence seriously.

The operative word is demonstrate. This is not done by reason or argument or a sense of fairness or justice. Sorry to disillusion you, and sorry to shoot down one of the cornerstones of academia: that "the truth will set you free" and "reason prevails over ignorance." Gandhi, Nelson Mandela, Martin Luther King all knew the vital word in their struggle was demonstrate.

Organize the protest well in advance and they will come. The numbers must be big. Summer sees the most people here. An optimized location might draw the biggest numbers, minimizing travel time. Even time of day would be worth studying so people could get home by dark, etc. Again, the numbers must be big and that will happen if there is great planning including close contact with all the local groups and bedfellows with common angst. I believe this can be wildly successful.

My name is Donald Smith. I am 82 years old and a native Mainer. I am a veteran and a grandfather. I was arrested and charged with criminal trespass at the Rollins Mountain wind project site in Lincoln on Nov. 8. Five of us formed a human barricade to the site.

Many people have asked me why I did this. Good question. I hope I give good answers.

The first reason is that nobody seems to be paying attention to the negative aspects of wind power – least of all the complacent and complicit media in Maine.

If we had just stood out there with signs, even the local reporter would likely have overlooked the event. putting myself on the line to dramatize why this project is so wrong, it caught the attention of media far and wide.

It seems that most people understand utility scale (or industrial) wind power superficially, accepting wind power as “green” and “clean” and the panacea for solving energy and climate challenges. It is the result of years of masterful propaganda by the wind industry.

Some of us have actually done a lot of research into industrial wind and have found huge negatives. dramatically raising the visibility of the issue with the arrests, we are getting people to discover these negatives as the follow-up dialogue occurs.

I have gained insights from my research into industrial wind. The wind industry would not exist without massive government subsidies. For example, the US Energy Information Administration reports that in 2007, wind received $23.37 per megawatt hour in subsidies; the next highest subsidy was $1.59 for nuclear. Those are our tax dollars going into something that doesn’t work.

We are putting up wind turbines in places where there isn’t enough wind to generate electricity. Look at the NREL map of wind potential in Maine. The area around Lincoln Lakes is all white. Look at the color code and white means “poor.”

My guess is wind turbines are not about generating electricity, but about selling a carbon tax in the form of renewable energy certificates, raking in production tax credits, and having the taxpayers pay the cost of construction.

Another reason I got arrested is to protest the proliferation of these industrial wind projects. I retired to live a quiet life on Caribou Pond, with a view of Rollins Mountain. That ridge will have 15 turbines, each 389 feet high. The total number of turbines will be 40 on Rollins Mountain and the ridges of Rocky Dundee.

TOO DESTRUCTIVE TO BE GREEN

An acoustics expert stated that the noise from these turbines will negatively impact hundreds of people on the lakes and nearby country roads, the same well-documented noise problems that have been experienced at Mars Hill, Freedom and Vinalhaven.

I am not a NIMBY. I don’t believe these industrial machines belong anywhere in the rural landscape. Not in anyone’s yard – back, front or side.

The noise issue is just one of many. If you could see the destruction of Rollins Mountain taking place right now, you would never consider this a “green” project. The DEP would fine me if I moved a rock at my home, yet they approved ridges being blasted away and scalped. They will never be the same.

The Rollins project will blast away more than seven miles of ridges and clear-cut more than one thousand acres and install 20 miles of powerlines to tie into the grid.

That is for just one project. Without thinking through the ramifications, the Legislature in 2008 passed LD 2283, a horrible law to give favoritism to wind power. They chose an arbitrary figure of 2,700 megawatts of installed capacity by 2020, which at a generous actual output of 25 percent, ends up being just 675 megawatts of intermittent, unpredictable, unreliable power.

If Rollins is 60 megawatts, then it will mean 45 more projects like this to achieve the goal.

THE PRICE IS WAY TOO STEEP

Do the math. Based on the impact of Rollins, that means at least 315 miles of Maine ridges and mountains blasted away to install 1,800 turbines; 45,000 acres or more of carbon sequestrating forest permanently clear-cut; and 1,000 miles or more of new powerlines.

Why did I get arrested? To help bring forth what a folly this is and how damaging it is to Maine’s environment. Wind power is bad economics and bad public policy. It is far from “green.” The negative impacts of these projects on the environment and our quality of place far outweigh the pittance of good they might do for the planet.

A legitimate protest should have important symbols that clearly represent your cause.  Look close at these two images. They are from a small 2008 protest in Redding CA. The image with the white wind turbine prop showing the two red eagles dripping blood and the "sign save an eagle kill a turbine" speak volumes about this devastating industry.  It would be fitting to see several hundred of these in a massive protest. 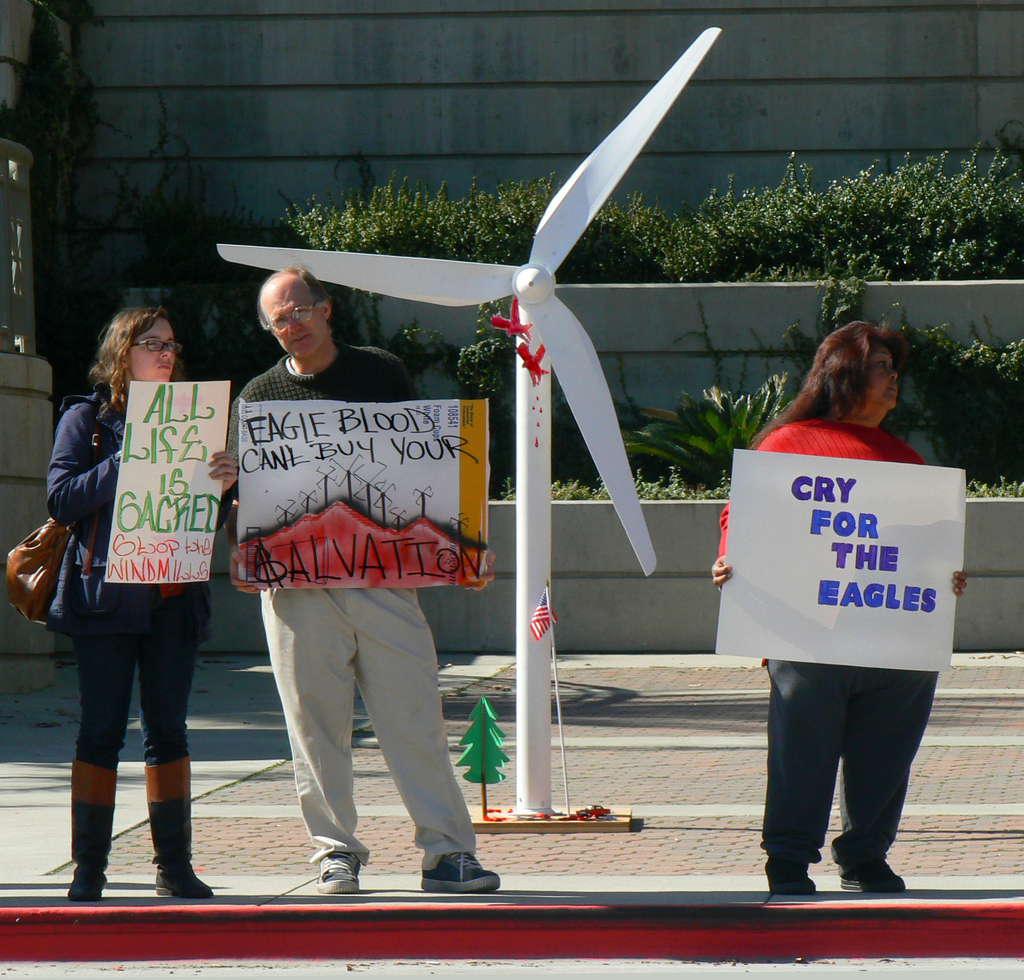 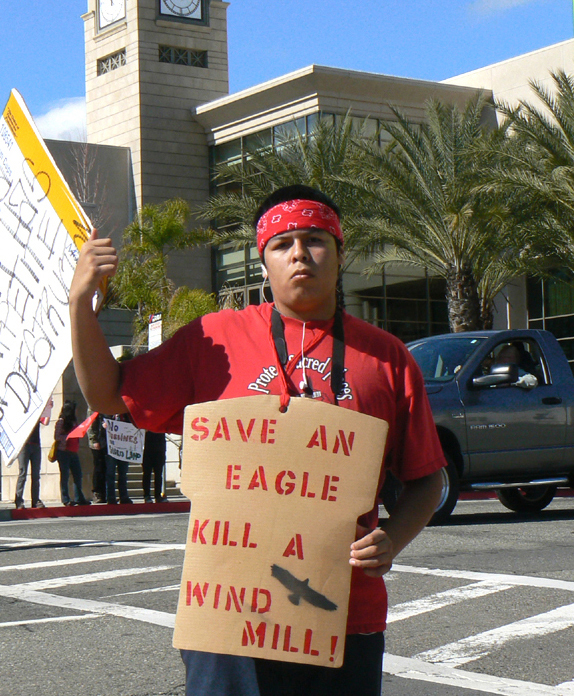 It is brilliant - I would love to see this happen before the legislature adjourns - Maybe before  LD 1513 is voted on ( I hope it does not get voted out of committee) Anyway - Our audience is first the Maine Legislature and also the people of Maine!  The Maine Legislature's 127th second session is scheduled to end April 20th so if not before that would be perfect! Put all the Bastards on notice - There is an election coming - We have all taken notice and we vote!

Holy smoke, Paula, that's brilliant.  Attendance is critical.  How do we inspire the discouraged, the burnt out?  How do we get people to turn out in droves?

Got 5 or 6 pages of notes so far on a demonstration. Thinking a week of events from different parts of the state. Start on Monday Patriot's Day April 18 in Augusta and ending on Earth Day the 22nd at one of the most devastated locations in Maine. Gives options for those who may not want to travel so far but yet coordinates all the events. Vacation week from school so kids and adults could be involved. An educational outing  to a scenic (once scenic) location for a vacation day.  Main message ideas:

SAVE ME - SAVE MAINE

HELP ME - SAVE MAINE

SAVE MAINE QUALITY OF PLACE

SAVE MAINE QUALITY OF LIFE

NO WIND SCAM FOR ME

SAY NO TO THE WIND SCAM

SAY NO TO IBERDROLA

SAY NO TO SUN EDISON

SAY NO TO RHODE ISLAND

SAY NO TO MASSACHUSETTS

SAY NO TO KILLING MAINE

SAY NO TO KILLING MAINE'S ENVIRONMENT

SAY NO TO KILLING MAINE'S ECONOMY

SAY NO TO BALDACCI

SAY NO TO KING ANGUS

SAY NO TO ALFOND

SAY NO TO FOREIGN CORPORATIONS

SAY NO TO KILLING MAINE BIRDS

SAY NO TO TERRORIZING MAINE WILDLIFE

SAY NO TO CORPORATE SCHEMES AND SCAMS

SAY NO TO CORPORATE SHILLS

STOP THE LIES - TELL THE TRUTH

IT'S NOT HARVESTING THE WIND FOR GREEN ENERGY, IT'S DESTROYING MAINE

IT'S NOT GREEN ENERGY, IT'S CORPORATE GREED ENERGY

STOP THE SCAM - RESCUE ME

Well, that's what I came up with so far. Got any takers?