The California and Texas Greenouts, Renewables Show Again That They are UNRELIABLE for GRID USE .

The California and Texas Greenouts  by (WSJ)

Renewables show again that they aren’t reliable to power the grid.

Electric grid operators in Texas and California are again urging residents to conserve power amid a sweltering heat wave to avoid blackouts. Keeping your thermostat at 78 degrees during the summer may be the green new normal.

The Electric Reliability Council of Texas (Ercot) warned this week that a large number of unexpected power plant outages combined with surging demand is straining the grid. Meantime, California’s Independent System Operator forecast that electricity demand might exceed supply several days this week. For residents in both states, this must feel like deja vu.

By WSJ Editorial Board

Last August Californians experienced rolling blackouts amid a heat wave that engulfed the Southwest. California generates half of its electricity from solar during summer afternoons, but it didn’t have enough power in the evenings when the sun faded. It also relies heavily on imports, but other states didn’t have power to spare.

Now the problem is reoccurring while a severe drought also limits hydropower. In a few years the Diablo Canyon nuclear plant is scheduled to retire. The plant provides nearly 10% of the state’s power and backs up intermittent renewables. But green groups want the grid to run completely on solar, wind and batteries. Blackouts could soon become as common as wildfires.

Californians who have moved to Texas are discovering that electric power is as green and flaky there too. Texas has drawn scores of wind developers cashing in on the federal renewable electricity production tax credit, which pays them for each unit of power they generate regardless of whether it’s needed

In March, wind made up a larger share of Texas’s power generation than gas. Ercot expects wind capacity could increase by more than a third this year. Nuclear and fossil fuel-powered plants are struggling to compete with wind, which can make money even when wholesale prices go negative. Many have shut down or are skimping on maintenance.

Millions of Texans lost power in February amid an Arctic blast that froze power plant equipment including wind turbines. Climate activists blamed fossil-fuel plants for not rescuing the state though they supplied power that more than compensated for the ebbing wind power. Texas was also berated for not “weatherizing” power plants to operate in frigid conditions.

But heat waves are common in Texas. So what’s the excuse now? Ercot says unexpected power plant outages eliminated 12,000 megawatts of capacity—enough to power about two million homes—about 80% of which was coal, nuclear or gas.

Yet according to Energy Information Administration data (see the nearby chart), wind energy plunged by two-thirds since late last week while gas-power generation has increased by more than half. Coal and nuclear have held steady. In sum, some gas plants had problems, but most were operating as expected but still couldn’t compensate for the huge reduction in wind power.

A big problem is that subsidies and mandates have spurred an over-development of renewables, which has resulted in gas plants operating at lower levels or even idle much of the time. Keeping standby units in top condition is hugely expensive. So when plants are required to run all out to meet surging demand or back up renewables, problems crop up—as they did this week.

This is the fossil-fuel-free future that folks in the other 48 states have to look foward to under Democratic climate plans. Pro survival tip: Buy a diesel generator—while you still can.

WSJ Opinion: Is a Bipartisan Infrastructure Bill Even Possible?
YOU MAY ALSO LIKE
UP NEXT 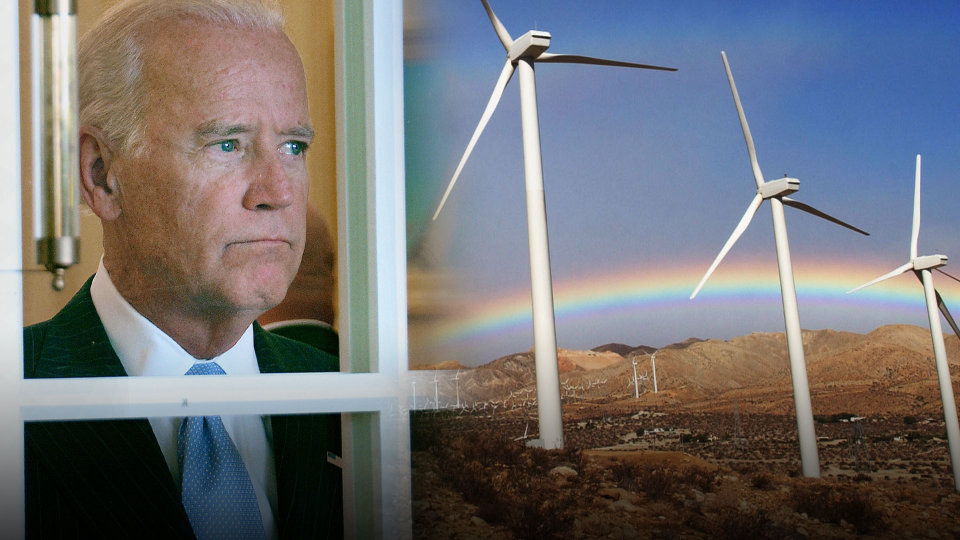 Former President Trump on the 2020 presidential election: 'I have not conceded'
https://justthenews.com/politics-policy/all-things-trump/former-pre...

It is good to discuss the merits of various clauses in the “We the People” US and VT Constitutions.

The Vermont Legislature, composed of elected representatives of the people, has the power for making laws, rules and regulations for running all elections in Vermont.

The Legislature is not allowed to delegate these powers to any entities of the Executive Branch, including the Secretary of State.

If a STATE Legislature wants to conduct a forensic audit of an election, no Executive Branch entity is allowed to prevent/obstruct it, and the US Department of Justice has no legal authority to interfere

The SOVEREIGN STATES created the federal government, not the other way around.
https://www.windtaskforce.org/profiles/blogs/preperation-of-288-000...

This article has a capital cost estimate of the US and the World GOING GREEN.

It would require TENS OF TRILLIONS of dollars

WORLD AND US PRIMARY ENERGY CONSUMPTION AND CAPITAL COST

World energy consumption is projected to increase to 736 quads in 2040 from 575 quads in 2015, an increase of 28%, according to the latest from the US Energy Information Administration, EIA.

Most of this growth is expected to come from countries that are not in the Organization for Economic Cooperation and Development, OECD, and especially from countries where demand is driven by strong economic growth, particularly in Asia.

Non-OECD Asia, which includes China and India, accounted for more than 60% of the world’s total increase in energy consumption from 2015 through 2040.

China, India, and other developing Asian countries, and Africa, and Middle and South America need to use low-cost energy, such as coal, to be competitive. They would not have signed up for “Paris”, if they had not been allowed to be more or less exempt from the Paris agreements

Obama agreed to commit the US to the Paris agreements, i.e., be subject to its financial and other obligations for decades.

However, he never submitted the commitment to the US Senate for ratification, as required by the US Constitution.

Trump rescinded the commitment. It became effective 3 years later, one day after the US presidential elections on November 3, 2020.

If the US had not left “Paris”, a UN Council likely would have determined a level of renewable energy, RE, spending, say $500 billion/y, for distributing to various poorer countries by UN bureaucrats.

The Council would have assessed OECD members, likely in proportion to their GDPs.

The US and Europe would have been assessed at 100 to 150 billion dollars/y each.

The non-OECD countries likely would continue to be more or less exempt from paying for the Paris agreements.

SUMMARY OF CAPITAL EXPENDITURES FOR THE WORLD AND US

The CAPEX values exclude a great many items related to transforming the world economy to a low-carbon mode. See next section.

SUMMARY OF "BIG-PICTURE" CAPEX FOR THE WORLD AND THE US

The above CAPEX numbers relate to having 50% RE, or 100% RE, in the primary energy mix by 2050, which represents a very narrow area of “fighting climate change”. See Appendix for definitions of source, primary and upstream energy.

This report, prepared by two financial services organizations, estimates the world more-inclusive CAPEX at $100 trillion to $150 trillion, over the next 30 years, about $3 trillion to $5 trillion per year

NOTE: The Intergovernmental Panel on Climate Change has estimated that an average of $3.5 trillion per year will be needed just in energy investments between 2016 and 2050 to achieve the 1.5-degree target.

It is unclear what accounts for the large difference.

Part of it may be due to differences of accounting methods among countries.

NOTE: The CAPEX numbers exclude costs for replacements of shorter-life systems, such as EVs, heat-pumps, batteries, wind-turbines, etc., during these 30 years. For comparison:

Coal and gas-turbine plants about 40 years

2) Rebuilding for Energy Efficiency: Reforming transportation systems and vehicles, and rebuilding almost all buildings, including housing, would be required to reduce their energy consumption by at least 50%. The world fleet of cruise ships and private yachts and private planes would be outlawed?

Any costs (in the US at least $50 trillion) associated with these 2 items are excluded from the CAPEX numbers.

Any costs for on-going replacements of mostly, short-life RE systems, are excluded from the CAPEX numbers.

NOTE: Achieving 100% RE by 2050, as a slogan, sounds attractive. It likely would be not feasible for a multitude of reasons.

3) Reliability of Electric Service: High levels of wind and solar on electric grids would require an HVDC overlay grid, connected at many points to the existing HVAC grids.

The CAPEX for site-specific, custom-designed, utility-scale, storage would be about $400 billion/TWh, if $400/kWh, delivered as AC.

For example: The New England grid, fed-to-grid of about 110 TWh/y, would need about 9 to 10 TWh of storage (battery storage or pumped-hydro storage) to cover wind/solar lulls and seasonal variations, if it had 1) much more wind and solar, and 2) no gas-fired CCGT plants, and 3) no nuclear plants, and 4) no major transmission connections to NY and Quebec.

4) Standards for Determining CO2 Reduction: Presently, there exists no standard way to verify the CO2 emissions and RE build-out claims of various countries! The opportunities for cheating/fudging/obfuscation are endless.

- The CO2 of upstream energy is usually ignored.

- Energy systems are rarely analyzed on an A-to-Z basis, because various RE promotion programs would not be anywhere near as attractive, regarding annual costs and CO2 reduction. See Appendix.

Raffensperger’s Own Team Was Saying “Bad, Bad Things” Were Happening in Fulton County Elections — He Ignored Them and Attacked Trump Instead (VIDEO)
https://www.thegatewaypundit.com/2021/06/raffenspergers-team-saying...

No Longer Just Theories… The Evidence Proves a Deep State Conspiracy of the Highest Order
https://noqreport.com/2021/06/17/no-longer-just-theories-the-eviden...

The Tucker Carlson Solution to Deal With a Corrupt Intelligence Apparatus and FBI Will Not Work, Here’s Why
https://theconservativetreehouse.com/blog/2021/06/16/the-tucker-car...

I have to remember it.